Cala Deia – no sand but what a beach.


Around Mallorca beach by beach


After our wild, windswept night we left Port de Soller reasonably early in the morning with the original thought of maybe sailing 21 miles west to Dragonerra Island just off the north western corner of Mallorca. However once again something in our pilot guide had caught our interest.


Cala Deia was listed as a small, picturesque bay with a small beach and fishermen’s huts at its head. The nearby town of Deia was described as being about a mile inland and ‘amongst the lovliest of Mallorca’s villages and the antitheses of the tourist resorts that abound on much of the coastline.’ Now that sounded intriguing but it was only about three miles down the coast so not much of a sail.


Never the less we felt we really should have a look and if the anchorage was OK and the place seemed as interesting as it was described we might stay. In no time at all we were anchored in a  very attractive little bay surrounded by high cliffs that provided good shelter from the south westerly breezes blowing. It certainly wouldn’t be the place to be in any sort of northerly though. 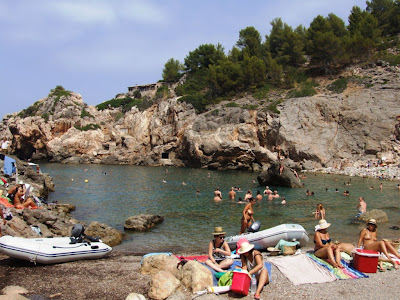 The beach was in fact all stone with just two small restaurants but was well populated with swimmers. With its rocky shore, ancient looking boat sheds and lack of resorts, Cala Deia simply had a nice feel to it. So OK, we set a new Alcheringa record for the shortest day’s sail at 3.7 nautical miles as we quickly decided to stay. That’s what we love about having a true cruising schedule, no rush.


It was a particularly hot day so we cooled off with a good swim before having lunch aboard. Then we headed ashore to walk it all off with a visit to village of Deia. While the guide book had said Deia was ‘about’ one mile inland what it didn’t mention was in that mile the elevation went from sea level to about 1000 feet and the path winding through the olive groves and goat farms was more like three miles and all UP! It was certainly a good work out in 40c heat but very picturesque which made it enjoyable.


When we did finally reach the village though we went straight into first café we came to for re-hydration therapy. Deia is everything the guide book said and more. It’s a fantastic traditional village largely unspoilt by modern times. We had a great time wandering around the narrow laneways admiring all the very old stone houses and cottages. This was also  the home of author and poet Robert Graves who wrote I Claudius and over 140 other works for over 50 years before his death in 1985. We passed by his house and made our way right to the church right on top of a high ridge overlooking the town, the valley and sea where visited his very humble grave.


Finally we made our way back down to the beach and had a couple of huge G&Ts in the very rustic beach bar. After our trek, sitting and watching the antics of the kids somersaulting off the rocks was a very entertaining way to relax. Rock jumping seems to be a very popular activity here on Mallorca. Anywhere we go where there’s rocks and water people seem to love leaping from one to the other. By the time we’d narrowly survived our second near litre glass of Gin and Tonic in the beach bar (at 3 euro they were hard to resist but a third would have been fatal), we’d watched people of both sexes and from about 6 to their 60s find a suitable rock and throw themselves off it. 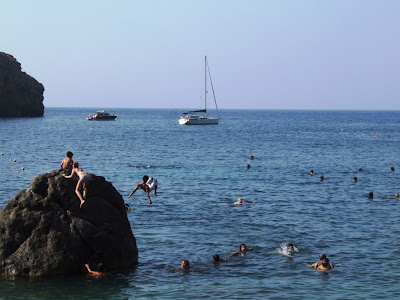 It even continued when we got back to the boat as we watched a particularly agile group repeatedly scale a reasonably sheer cliff beside us and leap into thin air. Sometimes with elegant splashes on entry and at others creating massive eruptions of water which we can only assume would have been accompanied by considerable levels of pain somewhere. Each to their own.


That night we had the entire anchorage to ourselves as the few other boats that had been around all left before sunset. With almost no wind, no waves, no shore side discos and  no bongo drums it was super peaceful. Our lack of sack time the previous night combined with our mountain hike ensured we all slept extremely well.


Thank you Cala Deia for a fantastic day.