After all the fireworks and celebrations of the previous night we still managed to get a reasonably early start on our way south. Departing Salerno also meant we were leaving the Amalfi Coast behind and, after the spectacular views of the last week, we weren’t really sure what to expect on our passage down to our planned anchorage at the town of Acciaroli.

﻿
The high mountains and steep cliffs faded away in our wake as we motor sailed in very light winds  out into the Tyrrhenian Sea away from the now much lower coastline. Even from our vantage point further offshore cutting across the wide bay towards Punta Licossa, we could see the beaches were still crowded with row upon row of the sun lounges and beach umbrellas we’d become used to. However, there really wasn’t a lot to look at until we rounded close to the headlands of Punta Licossa and Punta Del Ogliastro then skirted the coast the rest of the way to Acciaroli.

﻿
Here we found a nice little fishing harbour and marina. We initially anchored in a spot outside the harbour, but still protected by its breakwaters, just off a nice sandy beach. Two other yachts were already happily resting there so we though all would be fine. Karen and her mum, Joy, were quickly splashing around in the very clear water but before long a Police boat approached the yacht and informed us that we and the other boats were anchored too close to the shore. A young male officer was quite aggressive and although his English was limited  it was clear he was suggesting we would be given a big fine. Fortunately a female officer on board was much more helpful and indicated all would be OK as long as we upped anchor. We asked if there were berths available inside the harbour and were surprised to find out that mooring  against the outer wall for up to three days was free unless we wanted ‘services’.

The choice between a large fine or a free berth was a pretty simple one and a few minutes later we were demonstrating to Karen’s mum and dad how a true Med mooring works. We lined ourselves up at ninety degrees to the wall reversing towards a gap between two berthed boats, dropped our anchor to the harbour floor at what we judged to be the right distance out and backed in. On went the stern lines and out came the breath of relief that all had gone smoothly again. We thought as the berth was free it would be worth paying a few dollars to have power and water but when the Ormegiatori  (local concessionaire) asked for 90Euro per night we very quickly declined. And people say there are no pirates left in the Med.

﻿
Our next small concern was when our helpful, female Police Officer turned up on the dock and wanted a copy of our ship’s papers and the captain’s passport. We keep copies on board for just this purpose but, unlike previous requests by officials, when Rob passed over a copy of Alcheringa’s British registration and Marc’s passport, she was not satisfied. Marc may have been the registered owner of the boat, but as he was not aboard she wanted a copy of Rob’s passport. When we said we didn’t have a copy available for her to take she said no problem and photographed the ID page with her phone before toddling off with a smile and ‘Grazie, have a good day.’

The issue here is that we had now been back in the Euro Schengen immigration zone since leaving Gibraltar in early March and were well and truly over the ninety day stay permitted by our visas. Technically, we were now illegal boat people and certainly hoped that she was not going to then check it against some sort of central data base or we were possibly going to be in some trouble. The boat is British flagged and with Marc being a Brit, he has no such issues which is why we always provided his passport details over as captain. This was the first time it hadn’t worked so we had our fingers crossed the photo of Rob’s passport would go no further than a filing cabinet at the local police station.

﻿
The guide books told us ‘The small, fishing village of Acciaroli has become famous due to Hemingway’s visit in 1952.  Here, the author experienced an encounter with his own creation. He met "his" old man in the person of the fisherman Antonio Masarone. "Everything about him was old except his eyes and they were the same color as the sea and were cheerful and undefeated."  Almost every day, Antonio Masarone and Ernest Hemingway went fishing at sea.’

The locals are very adamant that Hemingway’s Pulitzer Prize winning ‘Old Man of the Sea’ was inspired by a local fisherman he befriended by the name of Antonio Maserone. Different people will point to different old hotels saying ‘That’s where he stayed.’ There’s even now a very upmarket ‘Hemingway Bar’ but unfortunately what doesn’t exist is any actual proof that the famous writer ever actually even visited the town let alone gain the inspiration for his classic story here.  There are reportedly no witnesses to his visit still alive and all the tales of his wandering the harbour and drinking in the bars are said to have been handed down from the past generation. Seeing  the tale is set half a world away and Hemmingway reportedly wrote the tome in an eight week period in 1951, the year before his reported stay, it may all be a case of not letting facts get in the way of a good yarn but we have to say if he did indeed spend some time in this charming little hamlet we can certainly understand why. It is absolutely delightful. Even inside the harbour, the water is very clean while outside, at the popular but not overcrowded beach, it could be easily classified as pristine. 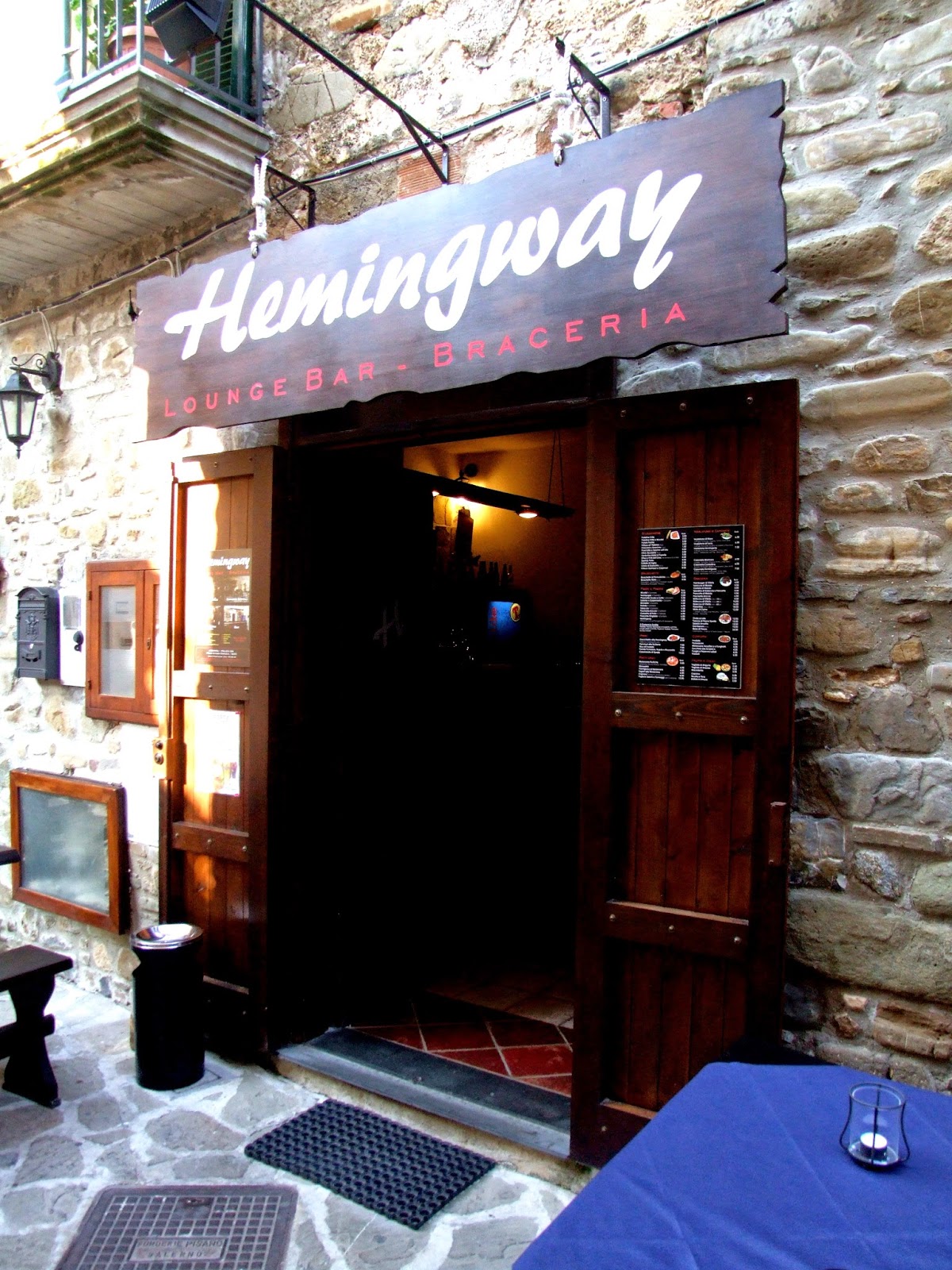 A high, medieval tower guards the harbour filled mainly with working fishing boats. An equally old church has clearly provided a spiritual haven for many generations of fishermen. Behind the harbour, we spent the afternoon exploring the narrow streets lined with old stone buildings, impressive villas, small piazzas and, of course, any number of tavernas and restaurants.  The locals were clearly in summer mode and the streets were alive with people socialising in the sunshine. We stocked up with some fresh produce and while headed back to the boat, were treated to a truly spectacular sunset over the Tyrrhenian Sea.

﻿
Regardless of the fact or fiction of the Hemmingway connection,  Acciaroli can rightfully lay claim to being a very inspiring and, thus far, unspoiled piece of Italian life. We loved it - and even got away without being arrested and or deported, always a bonus.

We're sorry the blog is currently a long way behind. We returned to Australia at the end of last European summer’s wanderings around the Med, and since then we have been extremely busy, catching up with friends and family, finishing and publishing our first book, ‘Stuff it. Let’s go sailing anyway’, mounting a very successful exhibition of Karen’s artwork plus buying and starting to sort a new boat to sail the western Pacific and South East Asia.  We’re now working at finalising the story of our adventures in the Med for this blog and getting it all back to current so keep checking back for new instalments.
To stay right up to date with what we’re up to these days and see lots more photos check out and 'like' our Dreamtime Sail Facebook page at Dreamtime Sail on Facebook