Bundaberg to Gary’s Anchorage – 70 miles using every sail in the wardrobe.


The weather forecasts indicated a strong south easterly blow was on its way up the coast which would arrive the following day and was likely to last a week. We could have stayed nice and secure in the comfort of the Port of Bundaberg Marina but why pay fees when you can be on the hook somewhere for free. We also wanted to be closer to Brisbane for the final run home once the bad weather blew past. We chose Gary’s Anchorage in the Great Sandy Straights as our bolt hole. We’d stayed there on the western side of Fraser Island a few times before and found it quite secure in all winds.
It lay over seventy nautical miles away so, even with an early departure from the marina, we were unsure if we’d make it all the way before sunset. The tide times were suitable with a mid afternoon high at the shallow pinch point of the Sheridan Flats. If we could get across Hervey Bay quickly enough we would have the last of the incoming current with us to the flats then be able to ride the outgoing tide down to Gary’s Anchorage. It was a great plan but we also had a bail out option if we were running behind. We would anchor  at the northern end of the straights off Bookar Island to shelter from predicted 25 knot north westerlies overnight before continuing on in the morning.

We cast off in the pre-dawn light which was a real achievement after our very late night watching the turtles nest at Mon Repos the previous evening. A modest northerly was forecast but conditions were very still as we left the marina. We made our way downstream raising the mainsail and mizzen in anticipation of finding some wind beyond the river mouth.

Once clear of the shallows off Burnett Heads we left the shipping channel and turned south east towards Fraser Island. We could see three sails spread across the water well ahead of us. So much for our start being early. These guys must have been up and away well before us. Unfortunately the wind was not strong enough to push us along at the speed we needed with such a long day hop ahead of us so we settled back motor-sailing across Hervey Bay. The apparent wind strength/angle wasn’t sufficient to keep the genoa filled but the staysail held nicely and, with full main and mizzen, we were able to maintain five and half to six knots at very low engine revs.


Mid morning the wind finally piped up to around 10 knots. Up went the asymmetric spinnaker and we were able to finally silence the engine. This had us zooming along very nicely making seven to eight knots and even better when it strengthened a little further. Remember, any two sailboats within sight of each other constitutes a race so we were delighted when by lunchtime we had passed all the boats in front of us. We love our spinnaker.

Getting pics of your boat under way is always difficult so when we are close enough to other boats under sail we usually try to get a few photos. We often end up in the same anchorage so it’s nice to be able to trade email addresses and swap photos of each others’ boats. We were very grateful to Rapscallion who got some great photos of Our Dreamtime from the leeward side looking beautiful in all her glory with the spinnaker flying.


To those reading this blog who are not sailors, we apologise because here comes a few paragraphs of sail speak. Sorry! Normal broadcasting will resume again immediately after.


As we passed between Big and Little Woody Islands, turning south to run along the inside of Fraser Island brought the wind directly behind us. As our asymmetric spinnaker won’t hold dead downwind we dropped it and set up to sail wing on wing with the genoa poled out. Of course our boat speed fell considerably without the spinnaker so before long Rob decided to try something he’d recently read about in an old sailing magazine he picked up at the marina. We poled the foot of the spinnaker low and a metre and half or so out the port side of the bow. We then found we could gybe the mainsail out to that side and the spinnaker held nice and full out to starboard. This set up had us making good speed again goosewinging directly downwind. Now we were even more in love with our kite.


The true wind speed was showing in the 15-18 knots region which is approaching where we’d normally be dropping the spinnaker for safety but the passage plan was also working. We caught the incoming tide giving our speed an added boost. We were clocking nine knots plus approaching Kingfisher Bay Resort. Our fast pace going with the breeze had the apparent wind speed across the deck down around the 10 knots mark so we left the spinnaker up as long as we could. Zooming along that quickly in a heavy cruising boat across sheltered, dead flat water is sailing nirvana.
We finally lowered the spinnaker and dropped it down the forward hatch into Kristian’s cabin as we approached the westerly turn around Bookar Island towards the flats. We normally motor through these narrow, shallow and winding sections of the Great Sandy Straights but as we had been having such a lovely sail and the wind was still a nice 15 knots or so, we elected to continue on with genoa, main and mizzen.


MISTAKE!!!!!! Five minutes after entering the narrow section the 25 knot north westerly predicted for that evening arrived early. There was very little room to turn into the wind to reef the mainsail or mizzen so we made do with quickly furling away the genoa and set the staysail in its place to try to balance the other sails a little. In the conditions we were very over powered making helming the boat a real handful but had little choice but to carry on. We can normally tack or gybe the boat on the auto-pilot with Karen looking after the main while Rob brings the mizzen across. Not now. Rob was way too busy strong arming the wheel to keep us off the surrounding sandbanks. As a result Karen was a very, very busy girl gybing both sails back and forward in the strong winds as we wound our way through the twisty bits.
When we finally did turn to wind and drop all sail just outside the entrance to Gary’s Anchorage, Rob looked at his watch and commented that it was a bit hectic through the flats but look how quick the 70 mile passage had been. Karen’s reply in very flat and even tones was ‘If you ever, ever suggest sailing through there again instead of motoring you will be doing it solo.’ Point taken.

So the good news. We were snugly anchored up in Gary’s Anchorage in plenty of time to freshen up with warm showers all around before enjoying well earned sundowner drinks and an absolutely brilliant sunset. None of us needed any rocking that night and all slept very, very well including a nice sleep in the following morning. 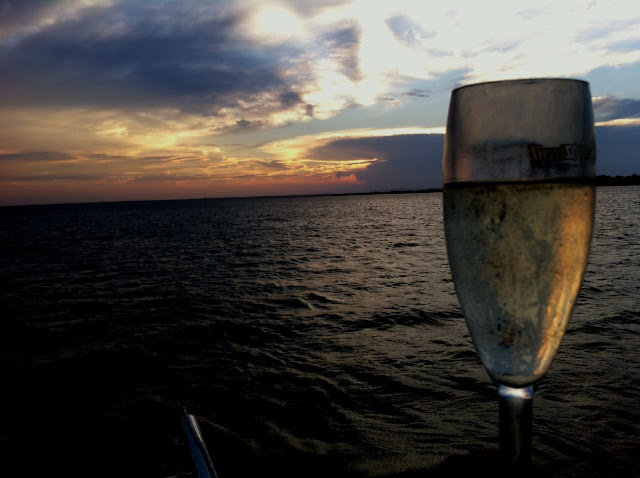