After our unbelievably calm evening anchored inside the lagoon at Fitzroy Reef, ten to twelve knots of westerly breeze sprang up during the early hours of the morning. By the time we arose, the previously glassed out water around us was covered in a small chop which, combined with the wind, put us off our plans of spending the day snorkelling more of this incredible reef.


We were far outside normal  phone service range so we downloaded the latest weather forecast via our new Iridium Go satellite communications. It indicated that this wind should swing more to the south west before dropping out late in the day with virtually windless conditions for the following day. A strong southerly change was on the way after that so we would need to be tucked away at Great Keppel Island by then. Oh the joy of getting up to date forecasts regardless of position.


Chris and Sally from Sea Whiskers and Garry from Chances came by in their dinghies to take a look and we all came to the same conclusion. A hop to an anchorage located against the reef at North West Island would let us explore another area and put us thirty miles closer to Great Keppel. As it was already after nine and we were at the top of the tide, all crews then set about getting underway.


The high tide meant we had more depth under us through the narrow entrance but with a small chop disturbing the surface it also meant the reef was harder to see under the water. Fortunately we were close enough to the slack for there to be minimal current running. As the tide drops the majority of the water in the huge lagoon has to flow out this small gap in the reef generating a very strong current which makes leaving at the wrong time far more hazardous.  We simply retraced the GPS track from our entry and were soon on our way.


Our course would take us through the channel between Wistari Reef and Heron Island and on to North West Island. We had thought the wind angle would allow us to sail but Murphy’s law struck again as the wind dropped and rather than swing to the south west it went  north west, straight onto the bow.
The engine stayed on giving us a bumpy ride. We bore off just enough to put some wind in our main and stay sail which steadied the boat a lot making things more comfortable. By the time we needed to come back on course to enter the channel we were well in the protection of the reefs and the sea had flattened.


There is a small harbour on Heron Island excavated out of the coral but the resort controls it and does not permit access to private boats other than in an emergency. We would have loved to have made a stop and explored the world famous island but there isn’t really any suitable anchorage outside the reef. The wreck sitting high out of the water on the reef near the harbour is a stark reminder of what can happen if you miscalculate around here.


We cleared the channel and continued on with the wind progressively dropping further. The largest coral cay island in the Capricorn/Mackay section of the Great Barrier Reef, North West Island is located on the western edge of a huge reef formation. It was sadly once the location of a turtle meat canning operation but is now a national park and a major hatchery for thousands of migrating sea birds. Our anchorage lay tucked in against the island’s fringing reef and is considered secure in south easterly winds of up to 30 knots. 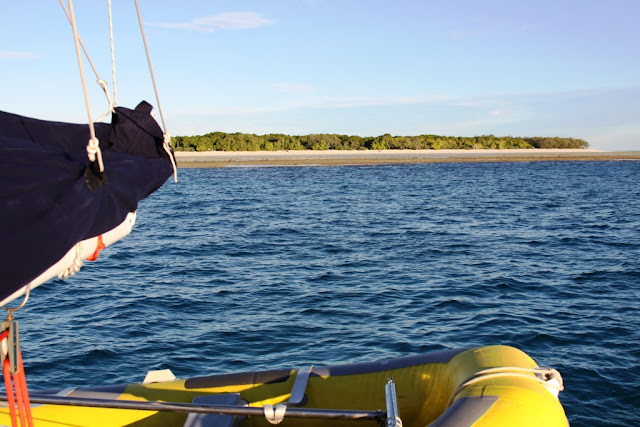 We were expecting less than five knots from the south west and that’s what we got as we dropped our anchor seven metres into the clear sand.  Like our experience at Fitzroy Reef, by sundown the wind had dropped out entirely and we were treated to yet another magnificent, ever evolving colour show that lasted long after the sun had dipped below the horizon. 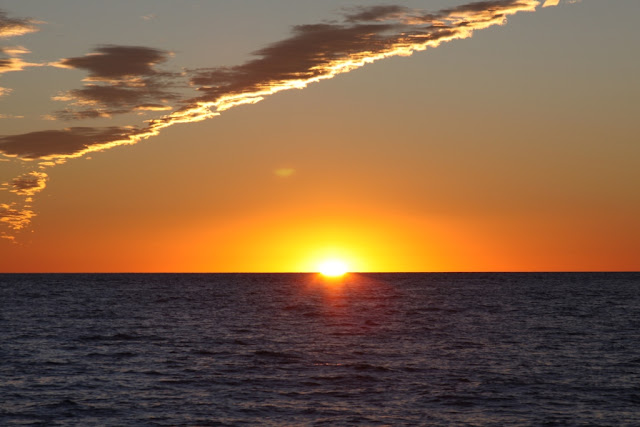 ﻿
﻿
After the night sky finally went dark, we retired below to enjoy a nice prawn pasta that Karen whipped up. Tonight was the second game in the annual State of Origin rugby series that pits our beloved Queensland Maroons against the evil forces of the New South Wales Blues. Queensland had won the opening encounter of the three game series and success tonight would wrap up our 10th series win in the last eleven years.
This far from the coast we found we had no phone or internet service so Rob was seriously considering calling our son via the Iridium Go Satellite system for progress reports. In an act of mad optimism he swung the TV out of its locker and switched it on 'just in case' we had any sort of reception. You can imagine our surprise when a crystal clear television picture appeared on the screen. As an anchorage, North West Island was certainly delivering tonight. Our Maroons then won a tight game to extend their winning ways and we went to bed as very happy Queenslanders.

We love to receive comments on our blog from readers. If you do leave a comment and you also have a blog, please leave a link as well. We'd like to click over for a visit and leave you a comment too.
To stay right up to date with what we’re up to  and see lots more photos check out and 'like' our Dreamtime Sail Facebook page at DreamtimeSail