We followed our previous day’s track on the chart plotter downstream in the pre-dawn light to clear the mouth of Island Head Creek before the lowest of the tide. We were surrounded by four other boats including our friends on Seabreeze and Howzat clearly with the same idea in mind. Sticking very close to our track made exiting the creek much less stressful than the entry had been. The theory being,  if we didn’t hit the bottom anywhere we went yesterday we shouldn’t hit it there today either.  We did see some readings in the two metre levels again inside the mouth but successfully cleared Island Head without bouncing off anything. We love a theory that works.


Again the seas just outside were quite rough and confused and we were very happy that our Leisurefurl in boom mainsail is so easy to raise from the safety of the cockpit. The mizzen can also be reached from the back of the cockpit so with those both raised we soon had the genoa unfurled and set course for Great Keppel Island 60 nautical miles to the south.


The coastline here is all part of the Australian Defence Force’s Shoalwater Bay Exercise Area and as such is completely uninhabited, unless the Army, Navy or Air Force are there blowing the place up again in which case we cruisers are forced to sail by well offshore.  The geology is quite dramatic with many small, rocky islands rising vertically out of the water to quite significant heights.  As soon as the sails had been trimmed and the boat was settled on course, Karen had her sketch pad our recreating a number of the more dramatic looking scenes along the way. 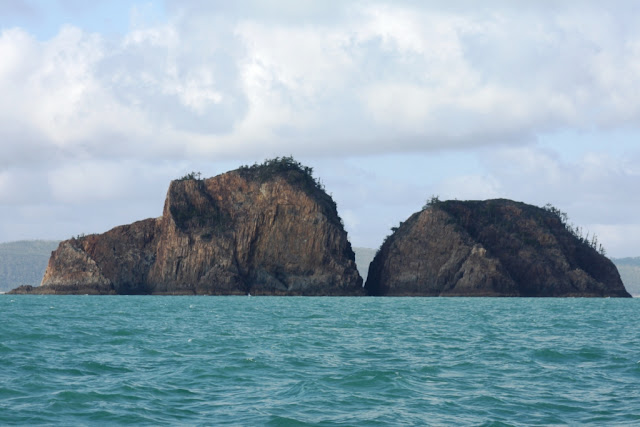 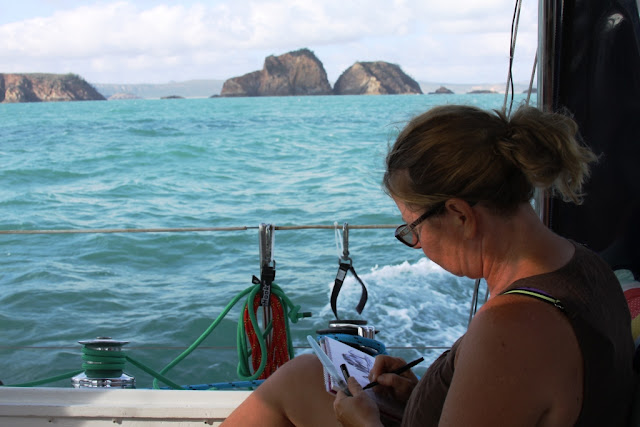 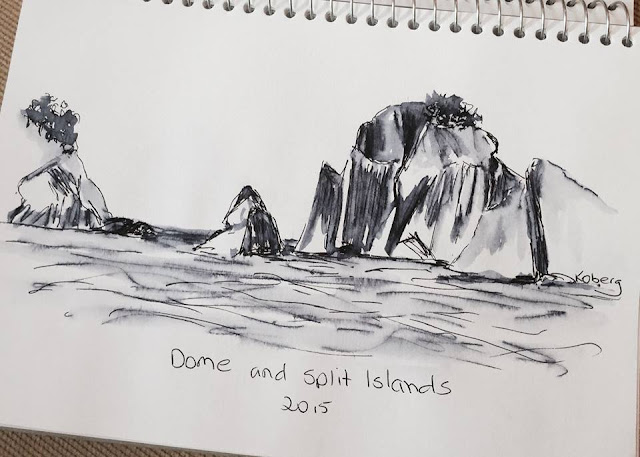 The modest wind blowing around ten knots from the Nor Nor East through the morning saw us edge away from the coast to maintain a workable sail angle so progress was comparatively slow. We gybed back and forwards a couple of times but eventually settled on a long run further offshore in attempt to keep the boat speed somewhere near respectable. The breeze  was forecast to strengthen later in the day so we were hoping to pick up the pace in the afternoon or we may be arriving at Keppel in the dark.


Well offshore from Cape Manifold we gybed again back towards the coast. The wind was picking up at last but also swinging around for a while before finally settling in the mid to high teens from almost due North.  With our destination now almost due South we poled out the genoa on the opposite side to the main and mizzen and began sailing wing on wing directly downwind consistently making better than seven knots.


With our sails well filled and Our Dreamtime charging along nicely as ever bigger swells rolled under our hull it was far from the perfect time to hear the ratchet on our game rod suddenly start screaming . We had hooked a large fish that was reeling line off at a scary rate while it was impossible to even slow down the boat let alone stop and back it up on the fish the way you would on a game boat.


Rob grabbed the rod and progressively increased the drag until the speed at which the line was disappearing slowed to a trickle. The fish managed another couple of decent runs but each time Rob was able to manage and then finally stop the loss of line. Eventually he was able to start retrieving line but whatever it was, this fish was not going to give up easily and would try to run again. The battle ebbed and flowed for a few minutes before the stern of the boat was picked up by a good sized swell which we surfed down the face of at nine knots or so putting too much strain on the line. Goodbye fish and goodbye favourite lure. Bugger. Fresh fish for dinner at Great Keppel Island would have been nice.


Mid afternoon the wind began to strengthen further and by the time we were approaching North Keppel Island we were seeing regular gusts over 20 knots. These conditions began to test Ben & Gerry. (The nick name for our new B&G Autopilot)  The big swells often swung the stern which presented much more of the mizzen and main to the wind overpowering the genoa. This pushed us off our dead downwind course. The Autopilot was then overwhelmed a number of times as it tried to correct finding  the weather helm too strong to overcome.


Reducing sail or even dropping the mizzen completely would have balanced the boat up more but  that would mean turning around into the wind and seas to reef and or drop. With the shelter of Great Keppel Island in sight just across the waters we decided to leave things as they were but with Rob taking over the helm from Ben & Gerry.


By the time we approached the passage between Middle and Miall Islands about an hour and a half later he was questioning  the wisdom that decision. The wind was now a steady 25 knots and gusting above that quite regularly. The swells were also standing up steeper and higher in the shallower water. This combination made hand steering physically hard work.


As he constantly worked the wheel back and forward countering the best efforts of wind and wave to send us off course, Karen had the camera out snapping photos of our friends David and Nerida having their own fun and games aboard Seabreeze in the spirited conditions. Marc meanwhile was sitting back engrossed in solving the cryptic crossword in that day’s London Times he’d just downloaded when we regained Wifi service after our days in black hole territory since we reached Digby Island. Rob’s comments about it being hard to get good crew seemed to fall on deaf ears all around.

Once in the lee of Middle Island, we were able to turn to wind in reasonably flat water and drop all sails with Rob letting out a huge sigh of relief as the helm resumed its normal feather light feel. We were then left with just a short motor around into the well protected bay at Long Beach on the southern side of Great Keppel.

This was always intended to be a shakedown cruise to learn our boat and we had definitely discovered some new limits. Our autopilot problems and experience hand steering in the strongish, downwind conditions convinced us that in future we would probably be better off leaving the mizzen sail in the bag when we sailed wing on wing if the wind was likely to get up.
Later that afternoon we hit the beach for sundowner drinks with David, Nerida and Rick where we compared tales of the days passage and told other tall stories. That’s what cruising is about isn’t it.


We love to receive comments on our blog from readers. If you do leave a comment and you also have a blog, please leave a link as well. We'd like to click over for a visit and leave you a comment too.
To stay right up to date with what we’re up to  and see lots more photos check out and 'like' our Dreamtime Sail Facebook page at Dreamtime Sail