Imagine strolling naked in the warm sun, hand in hand across a golden sand beach, slipping beneath  the surface of crystal clear, azure blue water to cool off as small waves lap the shore of your own uninhabited tropical island miles from any other human being. That, and so much more was what we delighted in experiencing at the amazing Hummocky Island, our first anchorage north of the Tropic of Capricorn.


We’d motored out of Pancake Creek in the pre-dawn light and raised the sails off Clew Point as the sun first began to peep over the horizon. A mild wind blowing from the East South East allowed us to turn North West and begin motor-sailing towards Cape Capricorn. Breakfast and coffee in the cockpit followed shortly after then we settled back for our fifty nautical mile passage. (90kilometres)


The breeze strengthened enough that we were able to turn the motor off before eight o’clock. The moment the noise of the diesel engine disappears the peacefulness of travelling under sail alone takes its place. Our course bypassed the industrial city and busy harbour of Gladstone but we did have to thread our way through the large number of large ships laying at anchor off the port. Other than that, all we had to do was tweak the sail trim now and then to suit the wind. 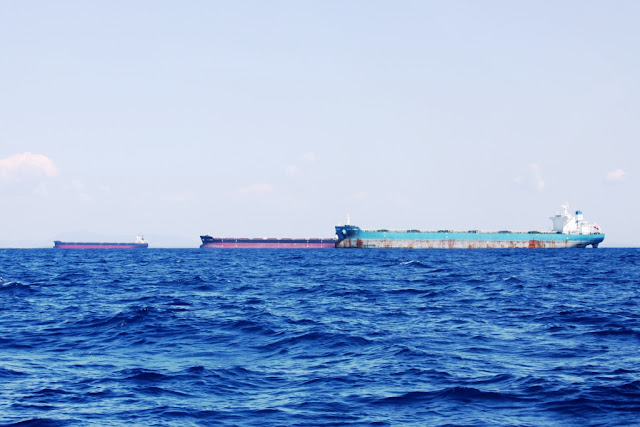 Unfortunately that wind began to drop late morning forcing us to once again motor-sail or risk not reaching our destination until after sunset. Arriving at an unfamiliar anchorage in the dark is something we avoid unless absolutely unavoidable. We like to be able to see any hazards and minimise risk.


We crossed the Tropic of Capricorn, the sun’s southern limit of declination at 23degrees 30 minutes just south of the tip of Cape Capricorn itself. We made a suitable offering to good old King Neptune, tipping some alcohol into the sea as we passed the line. We were now officially in the tropics at last.


Threading our way between Fairway and Ship Rocks to the South East we rounded the high cliffs of the Eastern headland, dropped our sails and entered the calm waters of the bay on the northern side of Hummocky Island, 18 miles south of Great Keppel. The further North we’ve travelled the bigger the tides so we carefully checked our tidal information, did our calculations and dropped the anchor close into the Eastern side of the bay in enough water to leave a metre under our keel on the low. 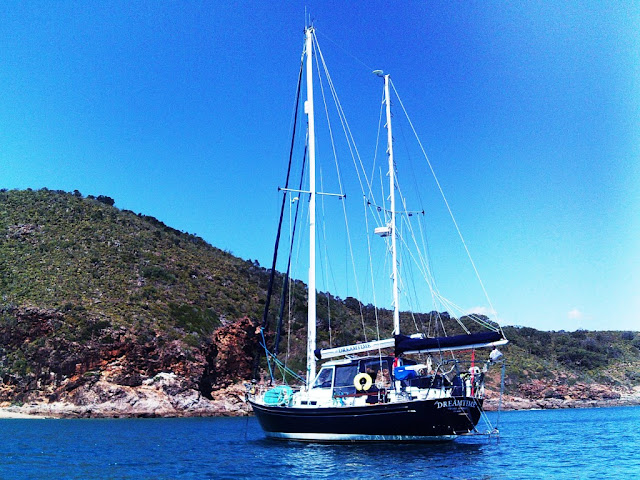 Looking around us at Hummocky Island reinforced to us that we were now truly in the tropics. It was stunningly beautiful with a glorious sand beach framed by high rock cliffs each side and dense foliage rising behind. We could clearly see our anchor buried in the clean sand six metres below the surface. The rocks lining the point were thick with oysters.  Best of all, we had the whole place to ourselves.


After completing our post passage chores and freshening up with nice hot showers it was time to celebrate our finally reaching the tropics. Right on cue, a near full moon appeared over the trees to welcome us and we popped a special bottle of champagne given to us by a good friend before we left to save for the right occasion. Thanks John, the Bollinger was outstanding. It went down very nicely in our new found serenity. Not to be out done by the moon, the sun then put on a dazzling display setting behind the western point to put a lovely full stop on our day.


Next morning we were engrossed by the sight of a number of humpback whales putting on a display of aerial acrobatics for us just beyond the island’s western point. We witnessed synchronised breaches with two and three whales leaping high out of the water at the same time before falling back generating huge splashes. Tail waving was also a popular trick as was slapping the water repeatedly with their huge fins. The show lasted almost an hour before the pod submerged and swam on. 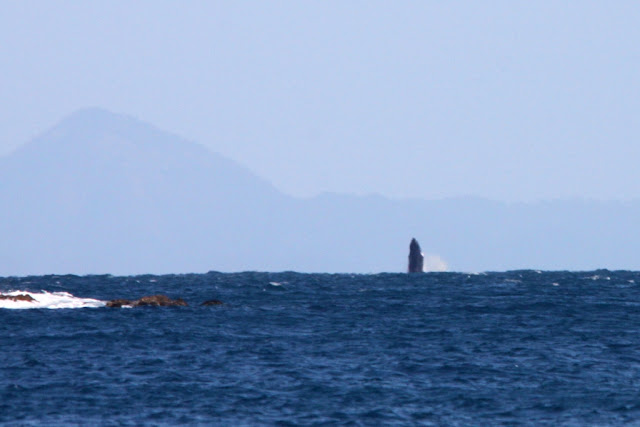 We then loaded the dinghy with food and drinks for the day and ventured ashore to the beach setting up our little camp in the shade of an overhanging tree. Clothing seemed totally redundant in the circumstances but we made sure we were well protected wearing our reef shoes, hats, sunglasses and liberal applications of sunscreen, particularly on those usually covered white bits. Then it was off to the rocks to gather some fresh oysters in the sunshine while the tide was low. Despite not being able to resist eating quite a few right on the spot, it really didn’t take long to collect a few dozen to go with our cheese and crackers. Very decadent. 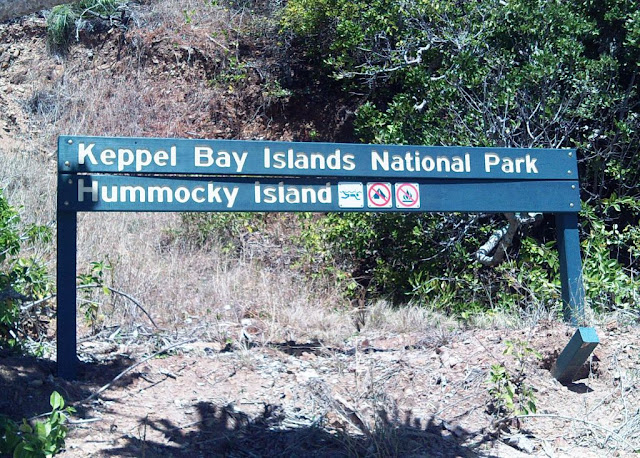 We then simply enjoyed the surroundings and our solitude. The weather was perfect with clear skies and gentle South Easterly breezes. The water was beautiful, as was the sounds of the abundant birdlife in the trees. Karen sketched, Rob read and the hours melted away. The day was, in every way, the most complete example of the romantic ideal of cruising the tropics on a yacht anyone could ever ask for. It certainly set a very high standard for all the days which follow to aspire to. 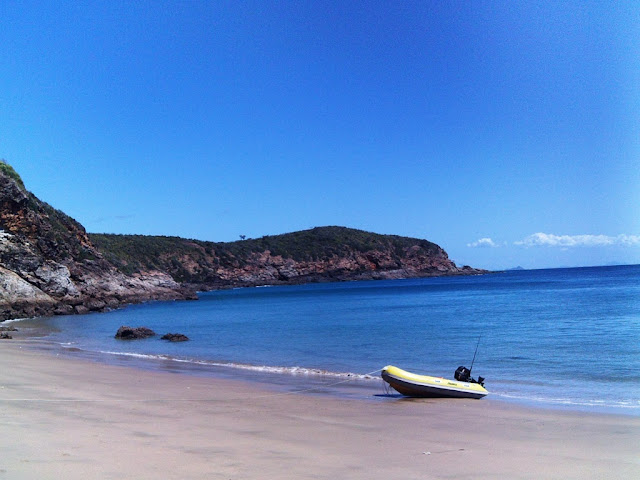 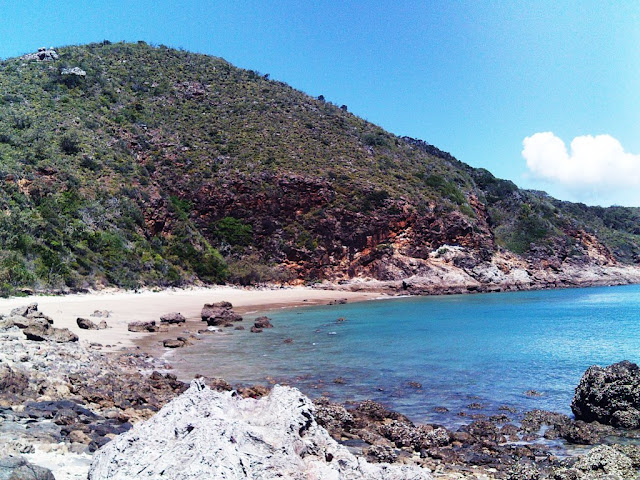 The wind was forecast to strengthen and move to the East the following morning which would see swell entering the bay making things uncomfortable. So sadly this was to be our only day on gorgeous Hummocky Island – this time. We will be back.

We’ve said all along that this was to be our shakedown cruise so here’s the report card for this chapter.

The weather. If it had co-operated we would have stayed at Hummocky for days.

What we did right.

Chose to stop at Hummocky Island rather than push on to the populated Great Keppel Island.

How we screwed up.

We did all our tidal calculations for anchoring based on the tides of the first night but didn’t look further to the low tide of the second evening which was actually much lower. There was no harm done but it was a lot closer than we would have liked. It won't happen again. We now check the range of EVERY tide to make sure we have plenty of water below the keel.