Ceuta – A little piece of Spain in North Africa


I think I have mentioned before, the most important thing to remember about cruising plans is that they are just plans, not a must follow to the minute schedule for strict adherence with no flexibility. I raise this again because our plans have changed again.
We arrived here in Ceuta on the North African coast on Thursday planning to stay until Monday morning before heading east. We had intended on lifting Alcheringa out of the water week after next in Almerimar on the Spanish coast for a hull wash, new coat of anti-fouling and to replace a seized seacock valve we haven’t been able to free up. Unfortunately the marina there informed us yesterday that they would not be able to do the work until after Easter.  However, we have discovered a very well equipped boat yard right here in Ceuta and after a chat with the British manager we have decided to get the work done where we are.
As a result we will now be spending an extra week in North Africa which we don’t expect to be too hard to take. The boat will now come out of the water on Monday morning and, all going well, we will disappear over the border for a couple of days in Morocco on Tuesday while the work is being done. Definitely sounds like a better idea than sitting around Almerimar while the boat’s out of the water anyway.
We spent Friday getting all this arranged, cleaning the boat down after our crossing from Gibraltar and discovering what’s where close by the marina. We dropped into a fishing store and discovered the fish around here must be extremely dangerous going by the range of automatic weapons on display freely available for sale. 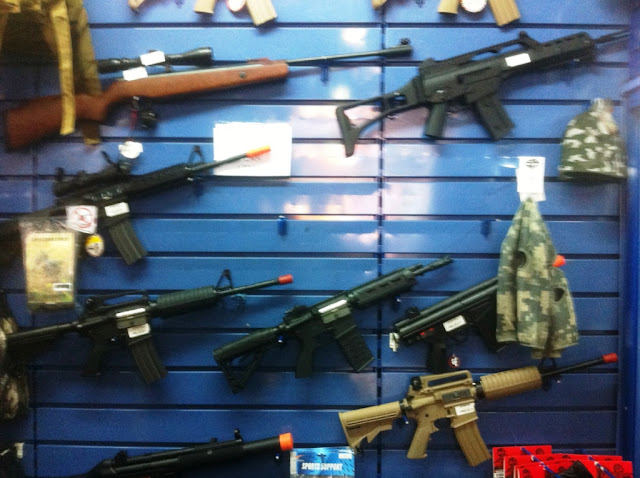 Of course we also needed to establish just which establishment in the vicinity looked good enough to warrant our business and discovered our most conveniently located ‘local’ yet in the form of ‘Café Madame Pots’ approximately 15 metres from the stern of the boat. Great friendly atmosphere, excellent coffee and a very nice bar with very cheap prices, what more could we ask for.
On Saturday we ventured a little further into Ceuta to explore its charms. Ceuta is a small peninsula of just 7.1 square miles (18.5k) whose strategic position on the southern shores of the Straits of Gibraltar  has made it an important commercial trade and military way-point for many cultures, beginning with the Carthaginians in the 5th century BC. It was not until the Romans took control of the region in AD 42 that the port city assumed an almost exclusive military purpose. It changed hands again approximately 400 years later, when Vandal tribes ousted the Romans and has been fought over by the Byzantines, Moors, Portuguese and Spanish ever since.
In July 1936, General Francisco Franco took command of the Spanish Army of Africa and rebelled against the Spanish republican government; his military uprising led to the Spanish Civil War. The troops were transported to mainland Spain in an airlift using transport aircraft supplied by Germany and Italy. Ceuta was one of the first casualties of the uprising. The citizens of Ceuta were repressed by the rebel nationalist forces led by General Franco, while at the same time the city came under fire from the air and sea forces of the republican government. Sometimes you just can’t win.
When Spain recognized the independence of Spanish Morocco in 1956, Ceuta was considered an integral part of the Spanish state remained under Spanish rule, but Morocco has disputed this point.
The government of Morocco has repeatedly called for Spain to transfer the sovereignty of Ceuta drawing comparisons with Spain's territorial claim to Gibraltar. Both the national government and local population of around 75,000 reject these claims by a large majority and of course the Spanish government insists it's a totally different case to that of Gibraltar.  We can't really see the difference but they can.
Ceuta’s architecture is an eclectic mix of styles but combine to make this a very attractive small city. It is well laid out with a number of attractive squares and the harbour front had been developed with extensive parkland and promenades. There’s the usual cathedral and churches but there are also a number of mosques as a significant proportion of the population are Islamic descendents of Berber heritage. Much of the historic fortifications still stand and the ‘Royal Walls’ with their navigable moat reaching right across the peninsula are particularly impressive and quite interesting to wander around. We discovered a military chapel within the thick walls which had been converted to a beautiful café/bar and decided it was a great spot for afternoon communion. Well we had the wine part of it anyway.
A quick trip to the supermarket saw us top up our food and drink supplies with enough for three main evening meals plus half a dozen bottles of wine and a couple of bottles of ridiculously cheap spirits producing a complete bill of 29 Euro ($37 Aus). Yep it’s good to be away from Gibraltar prices again.
After a fantastic meal of Corsican Chicken that Karen whipped up back on the boat, we headed back onto the streets later that evening  for Rob to get some after dark photos of the city and to join with the masses of people out and about. Teenagers were socialising in the squares and promenading along the waterfront, while the cafes, bars and restaurants all seemed to be very well patronised. The streets were also full of children happily running around as their parents  enjoyed a stroll in the city. It’s such a different atmosphere to anything we’ve experienced at home in Australia. 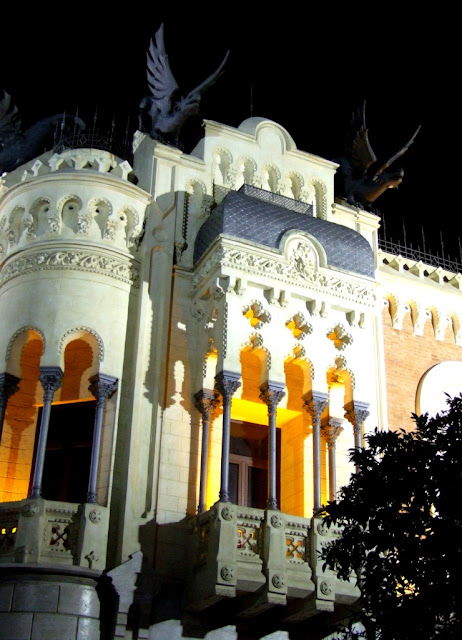 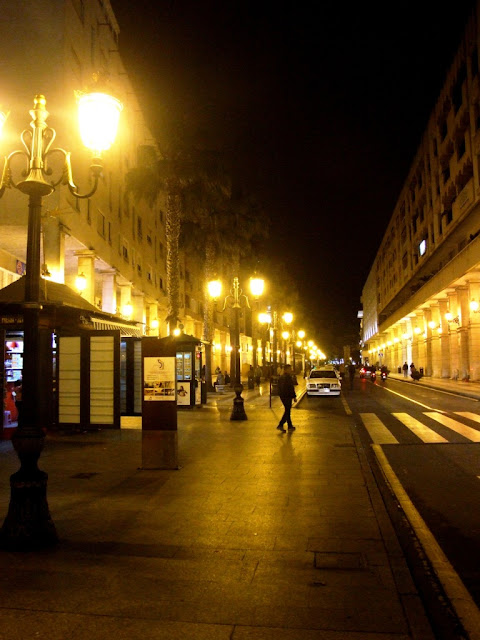 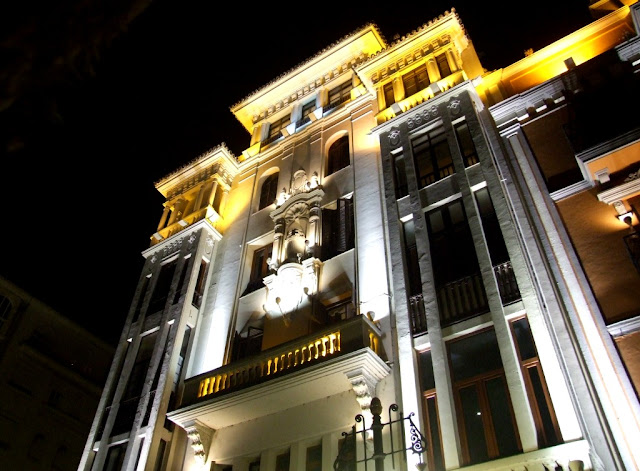