We left about 9.30 on Wednesday the 3rd and motored in almost zero wind around the spectacular Punta del Albir towards our next stop at Alicante.
The high cliffs of this cape were clearly thrust upwards in a massive movement of the earth’s crust tens, if not hundreds, of thousands of years ago exposing their many strata layers to view. The sea, wind and rain have been hard at work ever since wearing  the rock down into sand to return it to the Mediterranean.


Cruising along the base of the cliffs with the old lighthouse being the only visible sign of civilisation gives you the feeling of navigating some remote and unspoilt corner of the globe, far removed from the hurly burly of 21st century life.


That is until you clear the western point and the town of Benidorm shatters the illusion in the most evil way. Benidorm is the most graphic example of Spanish tourist development gone absolutely mad. Its never ending jumble of ugly high rise after even uglier high rise stretches from its beach infested with mainly obese white bodies rapidly turning bright red, all the way back into the hills well behind the coast. This is the town made famous in the UK and beyond as the setting for one of lowest points in television history, the reality series about Brits behaving badly abroad.


It brought to the screen the ‘reality’ of Benidorm as  the home of bar after bar filled to over flowing each summer with foul mouthed, drunken slobs exposing way too much sunburnt beer belly, loudly abusing the manager for not serving ‘proper’  fish and chips while at the same time trying to convince the cute, longsuffering waitress that she really would be mad not to accompany him back to his palatial apartment for a night of unbridled passion. After his silk smooth seduction attempt is rebuffed he’s last scene as the credits roll, heading for bed arm in arm with an equally drunk matron from Manchester who lost her dentures when she threw up in the garden bed. The sad news is the show wasn’t far from the truth.


Keeping well off the coast, the nearest we went to the place was sailing close by the attractive little Islote de Benidorm that is unfortunate enough to share its name with Spain’s Gomorrah.


Like many places on the Spanish Mediterranean coast, Alicante has a very good but expensive marina. We had stayed at it on Moksha back in April, but as the winds were predicted to remain very light we elected to anchor Alcheringa outside the harbour, just off the beach with a great view of the castle on the hill and where the price was far better. Free.


Rob had been busy catching up on the blog so, despite it already being a little late in the day, was keen to go ashore and get the latest chapter updated so he and Marc launched the dingy and headed for the shore while Karen relaxed on board enjoying a 'boy free' zone for a change.  On their return they assured her that they only chose the Ugly Coyote Bar in the marina because of its excellent wifi signal. The aesthetically pleasing waitresses had nothing to do with their choice. It was all for the ships blog after all. Karen couldn’t quite understand why, if the wifi was so good, did it take two hours  and four glasses of red to post the chapter. Well there were lots of photos to upload after all.

The wind may have stayed away but a reasonably sized swell made its way through to the beach all night. We would have been far more comfortable if there had been a bit of wind to keep us pointed into the swell but instead we tended to drift around beam on and rolled like crazy. We all rose next morning fairly tired but wanted to make the most of this very attractive town.  We’d only had time for a quick trip to the castle on our last brief stop here with Moksha and were keen to see more of the many historic features on offer that Karen had discovered on her google research the previous evening.

Marc was going to head up to the castle first. Karen almost let him embark on the same route as our exhausting climb to the top back in April but at the last minute her conscience got the better of her and she called him back and told him about the lift that went all the way to the top she’d found out about on the internet. No fair. Why shouldn’t he ‘enjoy’ the walk that we did? 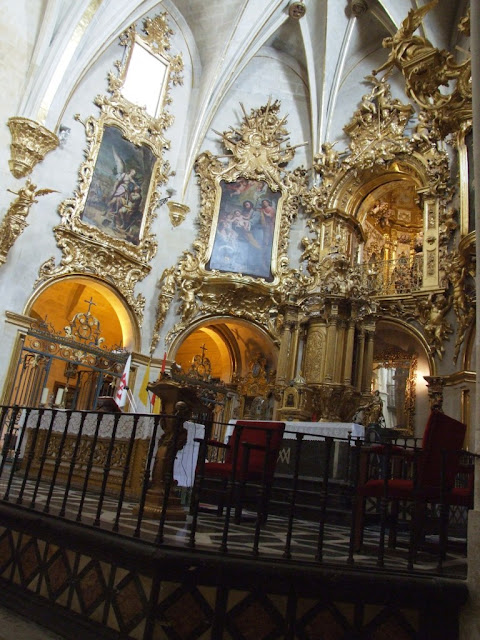 We embarked on our own cultural walking tour of Alicante, taking in the art gallery, and old church and then the town hall which was surprisingly a very cool place to visit with some great art and architecture. Next stop was the cathedral which like so many in Spain are surrounded by high buildings so you can’t really appreciate their exteriors however it was impressive enough inside.

Wandering the through old part of these towns is always a favourite with us. Narrow streets and tiny lanes lined with small shops, houses and old apartments often featuring ornate balconies or colourful window boxes. 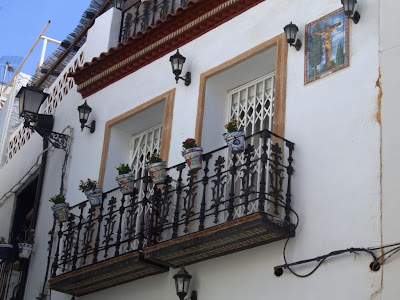 We were making our way up to the  Chapel Santa Cruz which was built into the ancient walls and Karen assured looked extremely interesting from what she’d read. The city's Easter Parade culminates here after the faithful have manouvred an incredibly heavy float through the impossibly narrow route to the top. So we wound our way up between the houses, up some stairs, up steep lanes, up more stairs followed by some more stairs and finally came to the tiny courtyard in front of the chapel just under the castle itself. Rob suggested he may have enjoyed his visit to the lovely Chapel Santa Cruz high, high, high above Alicante a bit more if it wasn’t all bloody locked up.


Back down, down, down we went and made our way back to the square in front of the town hall for a rest and bottle of vino blanco at one of the open air cafes. After regrouping it was Rob’s turn to pick the next stop on our search for culture and his choice was obvious and instant.  We really enjoyed the Volvo Ocean Race Museum located in the marina with a wide range of interactive audio-visual displays providing a very good insight into the history of the round the world races right from the original won by Robin Knox-Johnston to the stars of the current day.
It was then time to meet back up with Marc after his wanderings so it was just a short walk to the Ugly Coyote. Where else would we meet. Rob had yet another blog chapter to post.


When we returned to Alcheringa we found she was still rolling beam on to the swells. Not wanting to spend another uncomfortable night we lassoed one of the big buoys that mark the swim line off the beach and ran a line around it back to one of the winches. We were then able to winch it in tight to pull the stern around and hold the boat with her bow into the swell. We crossed fingers that an irate representative of the harbour master’s office wouldn’t suddenly appear and that it would all hold and give us a better night’s sleep before we continued our travels west along the coast.
Bingo. Much less roll through the night. We love a plan that works.