Calpe and Altea - Sailing the Costa del Blanco of Spain


If you want to get a bird’s eye view of Calpe, its white beaches that give this coast its name, and the surrounding countryside, then the way to do it is to climb the famous Penon D'Ifach, the huge rock headland dominating the landscape. It was high on Rob’s agenda on this stop as he didn’t get a chance to do it when we were here earlier in the year on Moksha.


Marc decided a gentle walking exploration of the town was more in order while Karen wisely decided the climb may not be advisable given the track to the top is described in Lonely Planet as very physical with the warning that you ‘take your life in your own hands.’


After a coffee stop at a beach front café we all headed off on our separate adventures with the plan to meet for lunch two hours later.


The going up the rock proved to be quite varied and ranged from easy paths lower down until a rough, unlit tunnel through to the seaward side is reached. There’s a sign in multiple languages at the entrance with the English text simply stating that ‘It is dangerous to go beyond this point’. Very reassuring. It’s very steep and the limestone has been polished to a slippery sheen by all the feet that have passed through over the years. The ropes strung on each side are needed to pull yourself up and onwards in a number of places.


Emerging into the light you’re greeted with a very narrow path of equally treacherous polished rock and need to hug the cliff face as you make your way across to where the trail becomes a little less frightening for a short while. The climb continues to be quite steep as you progress upwards and the path splits into various trails different people have blazed. It becomes necessary to stop and take a good look at what goes where before choosing a route. It’s all quite steep and by the time you eventually approach the top some rugged bolder hopping is required.  Grab ropes are very few and far between. Australian health and safety officers no doubt would have a nightmares if they ever saw this place.
However, if you survive to crest the top, WOW! If you aren’t already gasping for air from the climb the 360 degree views will definitely take your breath away. Sea views to the south, the Spanish coast stretching both east and west plus dramatic mountain ranges to the north. A definite, Oh my God moment. Rob found it easy to excuse the 20 minutes or so spent at the summit as required to take it all in but the reality is every minute of recovery time was needed before facing the equally challenging decent. Maybe a pair of sneakers that didn’t have totally worn out soles may have helped limit the amount of slip sliding away on the downward trek.

The up had taken 90 minutes. Add 20 minutes sucking in big breathes and he had all of ten minutes to make his luncheon appointment with Karen and Marc. Mmmm! That wasn’t going to happen. A quick ‘I’m going to be late’ text message had that covered. An hour later he emerged from the tunnel with another couple of kilometres to go but had a very good view of Alcheringa anchored out in the bay dancing very energetically up and down on her anchor chain as the wind was now blowing at 15+ knots straight in to the beach. Another text suggested to Marc and Karen that maybe it was time to meet back at the dingy and get out of dodge or face a very uncomfortable night bouncing around again. Having sat in the restaurant for an hour reading the menu while waiting for Rob to descend from the heavens this was not a proclamation that was all that well received but a quick look at the building swells hitting the beach soon had them on the move back to the dingy.

So half an hour later we were again upping anchor but this time it was just for a short, mid-afternoon move 8 miles across bay to Altea in the protection of the big cape Punta del Albir. Comfortably in time for sundowners, we were re-anchored just off the beach where it was both very beautiful and very calm.

Next morning we took the dingy in to the beach and set off on a long walk along the sea front to the old town. This part of the coast provides a pleasant contrast to high-rises and over development that has marred much of the Spanish Mediterranean Coasts and we quite enjoyed our brisk stroll.


We then climbed up through the steep lanes and narrow streets to reach the big church on the hill that dominates all views of the bay. The church is fronted by a delightful square lined with cafes that we soon discovered were all priced for the Northern European tourist market. As usual, we were required to drop the obligatory gold coin in the box at the door to enter the church. Rob still struggles with that concept. After all, the churches of the world aren’t exactly doing great business these days and charging at the door is unlikely to encourage new clients. 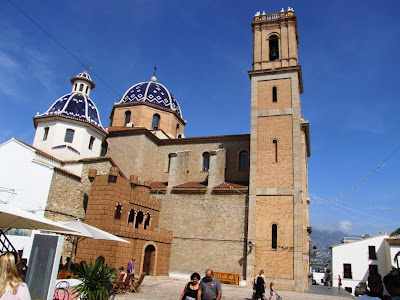 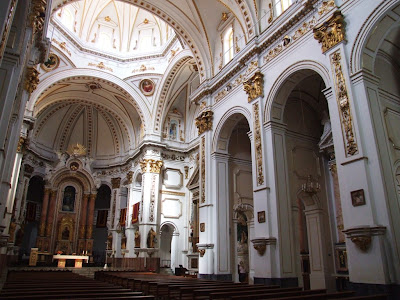 After viewing more beautifully decorated altars, idols and some magnificent art we wound our way down through more delightful cobblestone streets devoid of motor vehicles and discovered the Cellar Bar. It was hot. We’d walked a long way and we needed some rehydration plus it offered free WIFI and Rob had been lugging his lap top around all day waiting to upload the latest chapter of our travels. The appropriate blog sacrifice was soon offered up to the gods of the cyberworld  while we consumed 2 beers, 2 wines and 4 tapas all for a grand total of 5.50 Euro ($6.85). We had a hard time keeping a straight face as we paid the bill. How can anyone be making money at that?


Our next task was choosing one of the many beach front café/restaurants to have lunch at. In the end we settled on a huge bowl of steamed mussels each accompanied by lashings of fresh crispy bread all washed down with the obligatory bottle of vino tinto (red wine) for the price of a Big Mac Meal at home in Australia.  This was developing into a very good day.


We then embarked on our ‘great march’ mark two to return the five kilometres back to the beach  where Alcheringa was bobbing gently in thankfully still very calm seas just a hundred metres from the sand.


Some people have asked how we get any exercise cooped up on a 13.2 metre long yacht. Well apart from cranking winches, pulling on lines and constantly working muscles to balance ourselves to the constant movement of the boat when underway, if you think back on our activities in this chapter of the blog you’ll get an insight into our fitness regime. Other than the very, very occasional taxi ride, we walk everywhere.  We haven’t actually driven a car since being in the UK in early June. Hopefully this will keep us fit enough to sail the globe for many years to come.