On Monday morning Rob played the role of the alarm clock grouch and was up early putting the kettle on and rousing Karen and Marc out of bed. By now he’s well aware that there’s no chance of getting any productive input out of either of his crew mates until they’ve had at least one strong, morning coffee and preferably two so the fastest way to get the boat underway is to have the cups poured as they exit their cabins.

We’d identified a few potential anchorages along the east coast of Mallorca but until we saw exactly how protected from the easterly winds predicted for that evening we weren’t exactly sure how many miles up the coast we were going to have to go in the day. As a result we had the anchor up and were underway in the half light of the predawn despite the protestations of two tired meerkats who rather have still been curled up in their burrows.


We motor around the light house on the south east tip of Mallorca just after sun up and then pointed the bow north up the east coast. There are many lighthouses marking the headlands along the way along this coast, most of which is lined with sheer cliffs rising out of the sea that have been battered by waves for centuries. There are however a number of small calas or bays and a couple of larger harbours.


Unfortunately a number of the better harbours don’t have any options for anchoring and you must use the expensive marinas which doesn’t suit our cruising style or budget. As a result we’d chosen from our pilot guide one of the small bays amost half way up the coast, Cala Magraner as our first option for the night. We arrived after lunch and carefully made our way into the bay between the high cliffs. It was a narrow but very beautiful place well sheltered from the expected winds that night but there were five boats already anchored. We performed a couple of very slow, tight circuits and decided we’d move on. There was room for us to anchor but not with the amount of swing room we prefer to have for safety overnight and although it was very likely some if not most of the boats would head home by sunset we just didn’t want to be caught in an unsafe position if they didn’t.


Our option B was the larger harbour of Porto Petro a few miles north which did offer one anchorage area apart from the marina. As we exited Cala Magraner we decided at the last minute to poke our nose in the next bay along,  Cala Barcas, and just have a look. What a great idea. This was a wider bay than Magraner but because of the high cliffs at the entrance we were confident it should be well protected through the night. Although there were plenty of smaller boats out on the water it was clear they wouldn’t be staying and we were able to anchor with good room around us anyway. 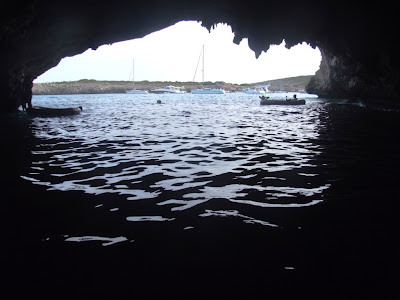 The bay was totally undeveloped with just a walking track in from the road well behind. There were no cafes, bars or the near obligatory sunbed hire operation but only one enterprising couple selling cold drinks and baguettes from under a canvas awning tied to a rock. Despite this it was still very busy on the beach with a lot of people simply having a good time. A massive sea cliff complete with a very large cave stretched along the northern side of the cala which we had a great time snorkelling along and into. Great care had to be taken with your timing entering and exiting the cave though as it was extremely popular with rock climbers and cliff jumpers. 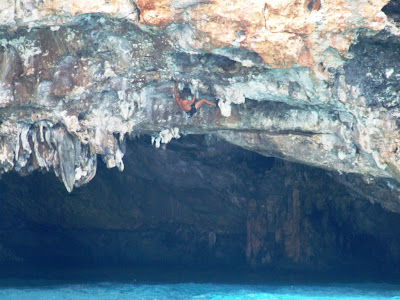 It really was a fantastic spot to spend the afternoon and night and another case when a second option can turn out definitely being for the best. As the sunset most but not all of the people departed. We discovered an interesting little community of alternative lifestylers (what we in Australia call ferrels) had set up camp on the beaches and soon had their fires burning high and serenaded us with bloody bongo drums half the night.

Well after sunrise next morning the beach was littered with sleeping bodies wrapped in blankets and just a single soul showing signs of life meditating on the waters edge. After having his sleep seriously impaired with the bongo drums Rob was keen to test out our fog horn as payback but Karen felt that would be a little too anti-social. 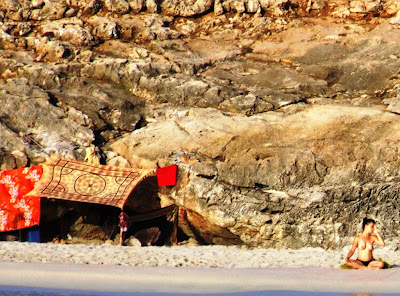 The evening’s predicted wind had failed to materialise and the day had dawned with glassy flat seas so unfortunately we were once again reliant on burning fossil fuels for forward motion rather than the sails. We had a fairly uneventful trip up the rest of the coast until performing our first rescue at sea, sort of. We were nearly a mile offshore passing by a very wide bay lined with large, high-rise resorts when Karen spotted something strange in the water ahead. Quickly the binoculars came out to assist with the identification of said floating object. No question about it. The poor thing had been blown out from one of the resort beaches and was at serious risk of being lost at sea. We sprang into our man overboard procedures to render immediate assistance. With much skill and heroism we had that air mattress safely aboard within minutes. 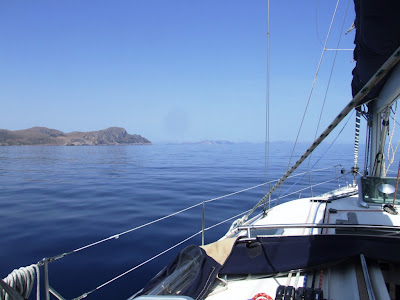 As we motored around the high cape of the north eastern corner of the island the stillness was suddenly broken by a just mild breeze at our backs but after two days of motoring weren’t going to waste it. Out came the asymmetric spinnaker and up she went. The silence was glorious as the engine went off and the breeze pushed us along at a modest three to four knots. Sheer heaven – for twenty minutes then it all disappeared as quickly as it came and we were left to pack it all away again and restart the cast iron topsail (engine). 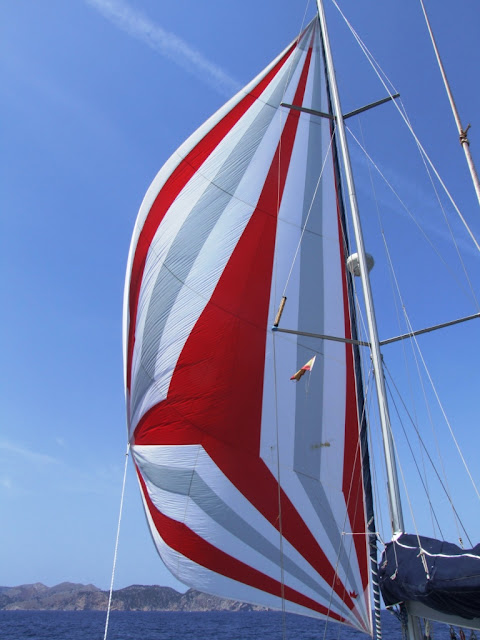 We soon anchored in Cala Figuera, a long, narrow inlet surrounded by towering cliffs with a nice little beach at the head.
Once more we were all settled in with plenty of time for some great snorkelling in perfect clear water exploring along the sea cliffs, caves and underwater stone archways we were able to swim through. We were finding it hard to believe but each anchorage we arrived at on our circumnavigation of Mallorca seemed to be even better than the last.