After a very busy day in port we left Palma on Tuesday morning. As our crewmate, Marc, had flown off to London for a few days, we were having our very first ever sail totally on our own. Rob handled the lines and Karen helmed the boat off the dock, through the harbour and out into the bay. With a 12 to 15 knot easterly blowing we’d decided to head back to the shelter of Santa Ponsa for our first stop.

The wind was blowing from right behind us so we tacked out off the coast then went wing on wing with the mainsail out the starboard side, the genoa out the port and ran dead down wind. Unfortunately we don’t have a spinnaker pole on Alcheringa yet but even without poling out the headsail it held beautifully in the moderate breeze all the way across the bay to Punta de Cala Figuera, the cape on the south west corner of Mallorca.


It was another clear, sunny day and a good opportunity to work on tanning our white bits although Karen insisted a keen lookout was maintained so she could cover up whenever a boat closed within half a mile.

We rounded the lighthouse on the cape and then had a nice broad reach flying the asymmetric spinnaker along the west coast back up to Santa Ponsa. We had no dramas this time and were able to anchor in almost the exact spot we’d been only a few days before. It was as nice a day’s sailing as we could ever ask for and a real confidence builder handling  the boat two up.


We went ashore for the afternoon and had a wander around a few more of the streets and enjoyed a nice cheap early dinner ashore. Karen was also a pretty happy girl having found a beauticians and was able to get an appointment for the important job of getting her legs waxed first up the following morning. This would still give us plenty of time to get further up the coast to our next stop.


We had a very peaceful night until the nightclubs emptied out about 6.00 and the streets became alive with drunk Irish and Brit tourists. Fortunately no wars broke out but if we hear one more loud, drunken rendition of ‘We are the Champions’ we may not be responsible for our actions.


After breakfast Karen duly got de-furred and then we headed out to sail up the west coast to San Telmo. Unlike the day before, this time the wind was very unco-operative. It was right on the nose as we left the anchorage then as we turned so did it. We motored across the large bay with the thought that we’d be able to sail once we rounded the point. The bloody wind turned as we turned again. Realising it was out to get us we gave up on the idea of sailing and motored our way the short distance up to San Telmo.


Like Formentera, San Telmo has restricted anchoring in areas of sea grass and a number of moorings which have to be pre-booked. Not wanting a repeat of our run in with the anchor nazi, this time we’d actually gone on line and had booked one of the moorings. When we arrived we wondered how we’d find mooring 8B amongst the bay full of floating plastic balls and started idling around trying to spot the numbers. Then we spied a sight to instil fear and dread into our very beings. Speeding from the shore towards us was exactly the same type of RIB (Rigid Inflatable boat) as driven by our jackbooted nemesis on Formentera. Not again.


But this time the government official had obviously been trained in a different place. He really could not have been more helpful. He guided us over to our mooring and waited to see if we needed help to get organised.  Picking up moorings is not exactly new to Karen as it’s a skill she learned on her parents’ game fishing charter boat long before high school and as Rob slowly nudged the bow onto the upwind side of the floating buoy she very quickly pulled it on board with the boat hook. Our attendant made us feel very good about ourselves as he even complimented us on the boat handling and mooring pickup.


Later when Rob went for a snorkel to make sure we were happy with the strength of the mooring we found out why. The attendant obviously witnesses many failed attempts. The sea bed was littered with boat hooks people had obviously dropped trying to pick up the mooring buoy. Pity they were fourteen metres down and way too deep for Rob without scuba otherwise we’d be boasting a very nice collection now. We then watched as the man we soon dubbed the Anchor Angel in contrast to the Anchor Nazi, went up to arriving boats that didn’t have moorings booked, explained the regulations to them and then guided them to where they could anchor legally and safely away from the sea grass area. Now that was more like it.


San Telmo, or Sant Elmo, depending on which book or sign you read, is a very beautiful spot with more of the crystal clear water we’ve got used to. We went  for a great snorkel one and a half kilometres all the way around a small island in the middle of the bay and then had a nice dinner and sun downer drinks for two on board.


It was the first time we’d had Alcheringa on a mooring and considering small swell running and slight breeze it actually provided us with a very comfortable night. Each morning since Marc had returned to the UK we had emailed him the Navionics track of where we’d sailed the previous day so he could see where we were and got all the track info such as distance travelled, average speed, highest speed etc.. After our first day on the mooring Karen emailed him the track.  It showed a series of lines that all merged together to form a large dot centred on the mooring. Incredibly we’d actually got up to 2.5knots across the ground at one stage as we swung with the wind and current. Marc got a giggle out of it anyway.


We had a quiet second morning on the mooring and Rob and finally got some blogging done. Mid afternoon we headed ashore for a look around the town but ran out of fuel in the outboard about two thirds of the way in. Bugger! Rob had been sure there was plenty left in the tank. Yeah right!


So after paddling the rest of the way in we found the town extremely nice. There was only one small resort on the southern end of the beach and the main street was all paved and lined with nice cafes, shops, a great bakery and some even better gelato stores. It was also a vehicle restricted area, very few cars making it very pedestrian friendly. 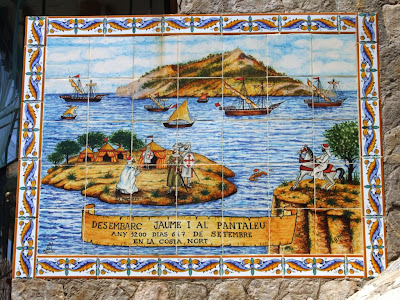 We came across a beautiful mosaic commemorating King Jaimie 1st of Aragon arriving with his fleet here in the 1200’s  on his way to drive the Moors out of Mallorca. Hang on isn’t this a groundhog day moment. Hadn’t we seen a monument commemorating the same thing at Santa Ponsa? A proud local café owner explained that the King may have landed his troops at Santa Ponsa but San Telmo was definitely his first landfall on Mallorca. He anchored here for a few days and then moved down the coast to get serious. Makes sense. This was a great spot for some R&R before waging war after all.


We wandered around trying to buy some petrol but unfortunately the fuel station was in the main town a few kilometres inland so we had to paddle back out to the boat moored about 300 metres offshore against the wind. Bugger! Bugger! With much effort we made about two thirds of the distance before our Anchor Angel arrived with his rib and towed us the rest of way. He’d left us to it until then because he thought we had everything under control but as the wind got stronger he saw we were actually being blown backwards towards the beach again.


You can only stay on the moorings for two nights and we had planned to sail on further than San Telmo but next morning there was no wind so we decided to just move the boat in close to the beach and anchor in a patch of sand near the swim line. There’s very little anchorage space and it’s usually filled quickly with the influx of smaller pleasure boats each morning so we moved early before day trippers arrived and had the pick of the place. 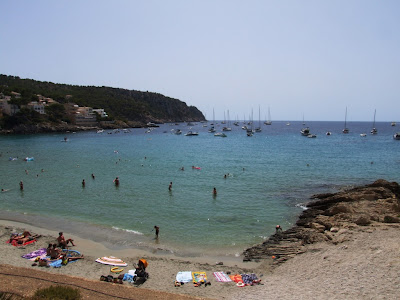 It was so nice here in fact that we ended up staying another couple of very enjoyable days in San Telmo doing not a lot other than swimming, snorkelling and soaking up the Mediterranean sun with a book..


On Sunday morning we set off to sail back to Cala Portals, the nice little bay we stayed in when we first left Palma. As the wind was predicted to swing to the north, it would be a well protected spot  to sit out a few more days waiting for Marc to return. There was no wind to begin with but then it picked up and we had a great day light airs sailing around the coast. It’s great when there’s no rush and we can just make the most of what breeze there is.


We arrived after many of the day boats had departed and dropped anchor right in close to one of the beaches. Yes OK. It was the nude beach packed with naked Spaniards of all ages, shapes and sizes but we chose it because it was the most protected from the wind and swell. Really! 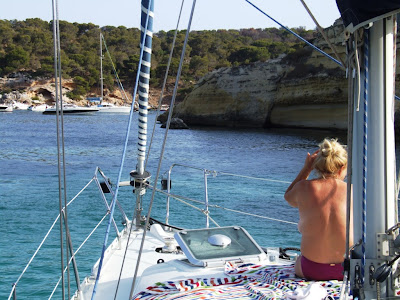 We never troubled the anchor winch again for four glorious days of skinny dipping, blogging, reading, working on our all over tans and watching the daily parade of visitors arrive by boat and down the cliff paths to the beaches. Each evening after the bay emptied of vessels and people we enjoyed the solitude and just being us on Alcheringa with nice food and local wines.  Life afloat is good.