Back to bloody Palma, yet once more.


Wednesday morning we went back into La Lonja Marina in Palma yet again and our theory that Alcheringa had a homing device constantly bringing her back here grew in strength. This time moored right next to the marina office where not surprisingly the wfi was much better than we had previously over on the next finger where we had always been before.


With August gone Europe had at last returned to work. Finally the long running saga of the VHF radio came to a conclusion with the MMSI number changed to ours and the unit refitted in its spot above the nav table. We also bought and had fitted a new battery charger so at least we no longer needed to run our engine when in port to keep the batteries alive.


On Thursday the insurance assessor visited the boat to have a look at the damage from our clash with a charter catamaran in the storm (See the earlier chapter Ambushed by the storm gods in Santa Ponsa). He proved extremely helpful and organised the guys from Audax boatyard, where we’d hauled Alcheringa out for her survey, to come to the boat and provide a quote. If you haven't read the story of how Alcheringa was damaged click back to the chapter here http://dreamtimesail.blogspot.com.es/2012/10/ambushed-by-storm-gods-in-santa-ponsa.html 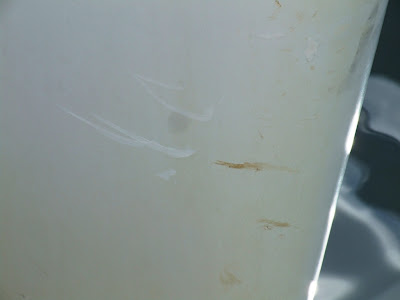 The bad news was the outboard uneconomic to repair. It would need a new carburettor at 800+ Euro (What a rip) as well as other expensive parts plus labour compared to 1000 euro for a new 2.5 Yamaha. Ouch went the credit card but we now have a shiny new outboard. Yay! The insurance better come good.


While all this was happening we made the most of the wfi in the marina and chatted with family and a number of friends back in Australia. It was going to take a few days to arrange insurance approval for the repairs and get the work booked in so rather than staying in the marina packed with charterers again we decided we’d clear out on Saturday and return to Cala Portals until the boatyard was ready for us.

Given a choice of being in a beautiful sun drenched bay or pay to be tied up to a wharf it was a very, very easy decision.