October 16 - 22,  2012
Westwood ho, ever westwood. With a constant eye on the weather, Tuesday morning saw us again moving on. We still had plenty of time up our sleeves before we were due to take up winter residence at the Queensway Quay Marina in Gibraltar, but the forecasts showed there were a few days of high winds with some rain coming so we were off across the large bay and around the next cape to a large marina at Almerimar. We’d had plenty of people recommend it to us as being very big, well equipped and very cheap so it sounded the perfect spot for us to sit out a blow for a few days. The marina’s reputation was confirmed when Rob rang to make a booking and was told that no reservation was needed and to just radio them on approach. Not wanting any surprises when we went to pay he then asked what it would cost for our 13.2 metre boat. ‘Not much. Wait I see. …. Between 11 and 12 Euro’, came the reply. That’s less than $14.60 a night so we were liking this place already.

We had very little wind in the early part of the day so after avoiding the big ferries making their way in and out of Almeria, we motored for a couple of hours first up. This part of the Spanish Coast has a flat plain squeezed between the sea and high ranges behind on which a very large proportion of Europe’s fresh food is grown in massive green houses that dominate the landscape. Not a view that is particularly inspiring, particularly when you’re chugging past with the canvas furled.


We did get a bit of a sail in the late morning and into the early afternoon before the wind again fell away. We had earlier discussed hauling out the cruising chute but considering the short distance we had to go and the wind being forecast to die anyway, Marc put it best, 'Couldn't be arsed'. We hate motoring and, unless we’re pushed for time to reach a port in daylight, we try to sail regardless. However, Rob has written Rule 1.99 into the Alcheringa operating manual which reads, ‘Whilst the craft shall be propelled by use of sails in all possible instances, the motor shall be engaged instantly the boat speed falls to a figure of 1.99 knots or less’. Most cruisers seem to draw the line at around 4 knots so we’ll have to see how long this one lasts before being amended upwards. 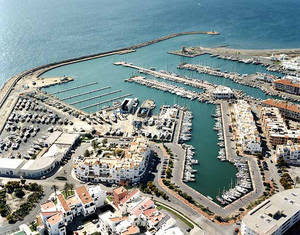 Our progress may have been slow but we had plenty of daylight up our sleeve and we made it to less than two miles from the breakwater at Almeria when Rule 1.99 finally kicked in. We were told told over the radio to tie up at the fuel dock beside the control tower to do check in procedures. This is similar to checking into a hotel but you also MUST provide a copy of the boat's registration and insurance certificate. No insurance, no berth.  As we approached with fenders out and lines ready they waved us off and directed us straight to our berth which turned out to be deep down the long central spine between rows of condominiums. It turned out the office was about to close for siesta so they didn’t want to bother with us until after four when they came back. So much for the insurance certificate or no berth. This is Spain.


Over the ensuing week we quite enjoyed our Almerima experience. The marina facilities were quite good, although the showers could have definitely been hotter.  Our berth was about as protected from any nasty weather as you could get and, as we discovered when we went exploring, only metres from cafes, bars, boutiques, laundromat, bakery, and what we found to be the cheapest supermarket we’ve come across in Europe. Also within the complex are two chandlery shops (including one run by Brits so no language issues), a sail maker, and well equipped, well priced boat yard.  There were many, many boats here that had been winterised and left till next season but there was also a reasonable number of people staying onboard for the winter and expat Brits living in apartments.  There are even quite nice beaches either side of the marina and a huge golf complex very close by.


The cheap prices encouraged us to sample a number of the food establishments around the marina but we soon found a favourite. Mario’s Sports Bar had friendly Spanish staff with good English, excellent free WIFI complete with power points beside some of the tables to keep our devices charged, PLUS free tapas with every drink. The range and size of the tapas was incredible, not to mention the quality. Mario’s quickly became our Almerima local where we’d set ourselves up with laptop and IPads  and keep up with the world. Staying still for a week meant Rob made some serious inroads on the blog and was uploading a chapter almost every day. By the time we had three or four wines, well priced at a couple of Euros each and gorged ourselves on Mario’s tapas we usually didn’t need dinner. (OK some days we might have had five or six.)


The Almerima complex is a fairly large however the majority of the apartments were empty and a large number had clearly never been occupied. It had obviously been developed during Spain’s huge construction boom that went way over the top. With supply outstripping demand by something like ten to one long before the GFC, when the crunch came everything stopped and prices tumbled. We saw a real estate agent’s banner on one balcony advertising the two bedroom, corner apartment as a repossession now available for 39,000 Euro ($47,700). Locals told us that you could do better than that by dealing directly with the banks. They have so many repossessed properties on their books they’ll take any offer that is close to what is owing. For some apartment that figure can be way above the now depressed current market but we were assured there were many absolute bargains around. It was far from good news for those expat Brits here that had bought near the top of the market as a few bemoaned to us. It probably explains why some of the expats that were clearly very regular regulars in the Brit bars around the marina were far from barrels of joy and in Australia would have qualified for the ‘Whingeing Pom’ tag. It was also one of the reasons why we preferred Mario’s.


As nice as the marina is, it’s built on a piece of coast with very little around it. We did actually consider changing our plans and staying here for the winter break but despite Gibraltar being a slightly more expensive marina we felt there would be much more to do there to keep us occupied through our long layup. Four months is a long time and we may well go stir crazy in Almerima.


So when the weather settled down from the howling westerlies that had been blowing we knew it would be time to move on. We weren’t going to miss the opportunity to take advantage of the cheap supermarket though and filled just about every inch of storage space we have. We got a few funny looks when we turned up at the checkout with three overflowing trolleys, especially when we’d been through with two loaded to the top half an hour earlier.


For more about our travels and lots more photos check out and 'like' our Dreamtime Sail facebook page at
http://www.facebook.com/DreamtimeSail?ref=hl