We cast off from the fuel dock at Garrucha with a full tank of diesel which was a very good thing as we again had to  motor sail  along the coast to San Jose as the wind gods still didn’t want to play the game. We did put the mainsail up and got a little bit of a lift out of what breeze there was but with just over forty miles to cover trying to go by sail alone would have never got us close within daylight hours. We were getting a bit tired of the sound of the engine but that’s life.


We saw a few flying fish along the way which was nice. They’ve been few and far between in the Med and it’s always very entertaining watching how far they can glide over the waves before splashing down.


We also spotted a huge, development onshore that had been very obviously stalled for quite some time and now well and truly plastered with a huge ‘Ilegal Hotel’ sign that covered a number of floors. It was out in the middle of nowhere and daubed with all sorts of graffiti including one sign saying  ‘DEMOLICIAN  - YA’. We’ve heard all sorts of tales of buildings going up without anyform of planning approvals and could only guess there was an interesting story behind this one too. We’d loved to have known the facts but given the size of the massive resort it’s a fair bet to say some bank somewhere that financed it has taken a serious hit to their balance sheet.


We rounded the headland and entered the shelter of the bay at San Jose in the late afternoon. It was a very attractive little spot with an interesting looking town stretching away behind the beach. There was a small marina but as we expected conditions to stay reasonably calm for the night we elected to anchor outside near the beach. As we began to relax with sundowners in the cockpit we counted 34 small boats come out of the marina in a one hour time space and headed all over the bay fishing. We couldn’t believe so many boats could fit behind the breakwaters in the tiny marina but it was obviously a bit bigger than it looked. About 8.30pm someone must have sounded a dinner bell because all of a sudden they were all coming back in at once creating some serious peak hour traffic at the harbour entrance.


On Sunday we had planned to have a look around the town but after checking the forecasts we decided this may not be a good place to be in the 15 to 20 knot south-westerlies predicted for the evening. It was time to go so San Jose went on the list of places to stop at on the way back east next year. Up came the  anchor and we set sail to Almeria. Yep. We actually got the white bits up and had a fantastic sail around the cliffs of Cabo de Gata and then right across the big bay all the way to just off Almeria itself. The wind strengthened and turned through the afternoon and we were able to go with it only needing to tack out from shore at the very end.  With the wind now sneaking up above 20 knots we were getting a bit overpowered. We could have reefed the main to reduce sail but as we were only a mile from the harbour elected to simply drop it and motor the rest of the way in.


Almeria is a very large commercial port with a lot of big shipping, particularly large ferries. There’s a marina just outside the inner harbour but when we rang them asking for a berth they at first said OK then a minute later decided they suddenly had no room. This was despite us being directly outside the entrance looking at empty berths inside.  Apparently they primarily cater for permanent berth holders and aren’t too keen on casual visitors. We must not have seemed important enough for them.


By now the wind was gusting in the 25 to 30 knot zone with quite a lumpy sea so we had no desire to be heading back out in it. No anchoring is permitted in the inner harbour but we decided there was room between the inner breakwater and the marina so we simply dropped anchor there, made sure we were well hooked in and let out plenty of chain. We were very happy to be behind the protection of the main, big breakwater. but even so, a fair size swell was finding its way around its end making things a little less comfortable than the marina would have been but such is life. We were dancing around a bit on the end of the chain but at least we were safe and this was free. We just hoped no one came along and told us to move on. 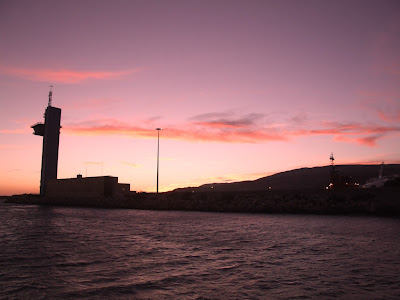 Fortunately the wind dropped out a little after midnight and Monday morning dawned nice and calm with clear blue skies. It was time for a day ashore checking out the city.  First stop was the Vodafone shop to get Marc and Karen’s internet data topped up. Marc goes into severe withdrawals and may be found in the foetal position whimpering if he can’t download his London papers each morning  while Karen’s IPad has all our weather forecast apps on it so this was definite priority.


We then wandered the streets and checked out the excellent fresh food, meat and seafood markets in the city centre before settling in for lunch at a very cool old restaurant/bar. Eventually Karen managed to get us out the door and off on an ABC tour (Another Bloody Castle).   Her tourist  guide  said that next to the Alhambra in Granada, the Alcazaba of Almería is one of the main castles in the south of Spain. It was constructed in the X century by the Califa Abderramán III. It offered shelter to 20,000 people at one time so we had to have a look.
It was a fair walk through the streets, past the cathedral, up the lanes all guided by Karen’s IPad’s maps to get to the base of the hill. Here we found a sign proclaiming the castle open 10.00am to 8.00pm on weekdays. Cool. It was only 2.30. We could see a set of closed doors ahead so deduced that the entrance must be up the steep road that ran beside the castle and off we went. 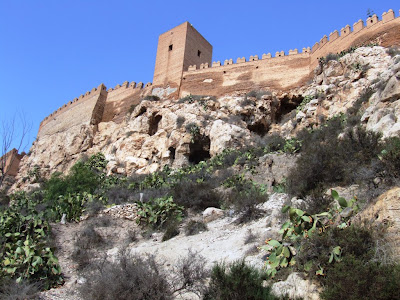 Reaching the top we discovered another set of locked doors so after a short break to get our breath back we set off back down to the bottom where we now found the doors open. A bit weird but what the heck. In we walk and straight to the ticket window manned by a man in uniform who we ask for three tickets. ‘No tickets’ he says. We immediately think it must be free but our illusion was shattered when he followed his opening statement up with. ‘Is closed’. It was now five past three. Go figure. So much for the sign outside proclaiming opening hours till Eight PM. Oh that’s right. This is Spain.


Sergeant-Major Karen, then marched us back through the streets down into the old town where the troops mutinied and headed to a cafe for a bottle of wine. As we were finishing our tipple we noticed some very ominous looking dark clouds appearing over the ranges so high tailed it back to the boat in case the approaching thunder produced any nastiness.  On our return we found another yacht had joined us in our little anchoring spot and we immediately started calculating chain lengths and swing room making sure we had clearance. Our wild experience in Santa Ponsa on Mallorca was still fresh in our minds so we were more than happy as the storm rolled by to the west without as much as a spot of rain falling on us. Another bullet dodged.