Aguilas and Garrucha – Sailing the Costa de Blanco of Spain

Aguilas and Garrucha  – Sailing the Costa de Blanco of Spain


We left Cartagena on Thursday morning and surprise, surprise, the wind strength and direction was still not playing the game so we once again had to motor our way west along the coast. Our destination was the fishing port of Aguilas which appeared to offer a well protected area to anchor inside the harbour.
Not long after clearing the heads at Cartagena, the Spanish Navy decided to do a cruise by. We’re not sure whether they were doing anything specific or just wanted a closer at our boat so we just waved and kept on our merry way. 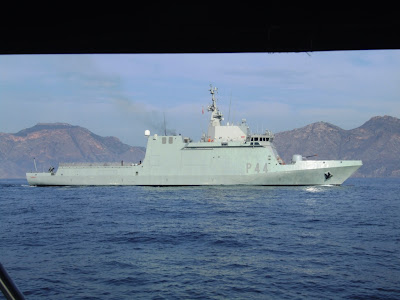 It was late afternoon by the time we reached Aguilas and were quickly disappointed to find the area in the outer harbour we planned to anchor in completely filled with small boats on moorings. We didn’t really want to anchor anywhere outside the harbour as there was a reasonable swell running along the coast so we went looking to see if there was anywhere in the inner harbour we might be able to tie up. We spotted three yachts moored on the town wall next to the fishing fleet’s wharf with a nice empty space that looked just fine for us.
We then spent fifteen minutes unsuccessfully trying to call up the harbour master on the radio for permission to moor before deciding this might be one of those times it’s better to ask for forgiveness rather than permission. We backed into the space and tied up figuring someone would turn up at the boat eventually to either tell us we couldn’t stay there or to collect payment.


Through the rest of the afternoon the fishing fleet progressively returned to port and unloaded but no one seemed too interested in us and we were totally left alone. We went for a walk over to the fish market and watched the day’s catch being auctioned high tech style. There were all sorts of seafood including prawns, large and small fish, squid and octopus with everything loaded into big plastic trays that were moved through on a conveyor of rollers to the centre of the market. One by one the trays went onto a set of scales. The weight along with a CCTV image of the tray’s contents were shown on a huge flatscreen in front of the buyers who all had a small hand unit similar in size to a TV remote.


The buyers punched in their bids and the winning price and buyer number was flashed on screen and a ticket with those details printed out and dropped in the tray. It was then picked up and placed on that buyer’s pallet for collection at the end of the auction. By then the bidding was underway on the next tray with not a word said. It was strange seeing the whole auction happen in complete silence but quite interesting to watch from the overhead viewing area.


Next morning Marc decided he wasn’t feeling all that energetic so he stayed with the boat while we went for a walk into the nearby town centre. The old part of Aguilas is at the base of a very high rock headland topped by the obligatory castle. It is very picturesque with streets lined by many old buildings including some with strong Moorish influence. There’s also a fantastic town square filled with gardens and sculptures and surrounded by outdoor cafes. We found it very busy with lots of people everywhere but almost all the shops were closed which had us a little baffled. 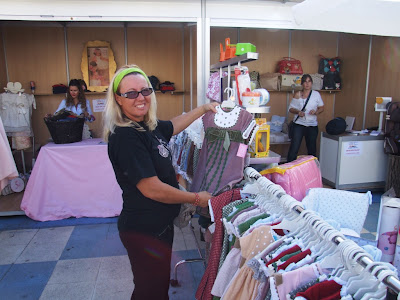 There was a great outdoor market happening and Karen couldn’t resist the little girl’s fashions. Granddaughter Lyla now has a package on its way back to Australia. When we finally stopped in a café for a coffee there was a big parade in Madrid being shown on TV and we discovered October 12th is Spain’s National Day and as such a holiday. That explained that. 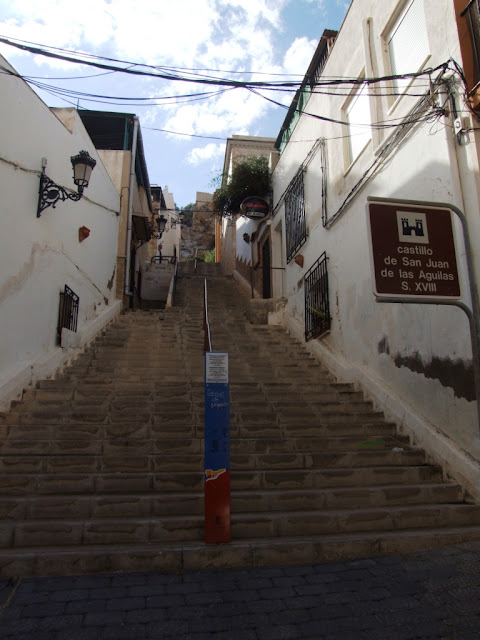 We walked up the  steps then almost as steep road to the castle de San Juan de las Aguilas with our fingers crossed that it wouldn’t also be closed for the holiday. We could see a lift near the end of the road that went the last four stories or so up to the tower itself but sure enough, when we huffed and puffed our way to the door it was, like many things in Spain, ‘broken’. 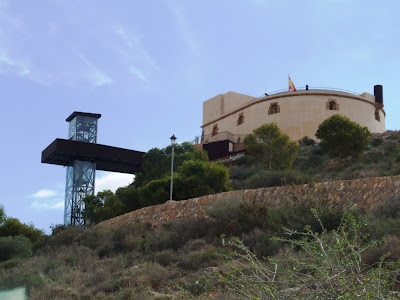 The stairs provided a good work out to keep our exercise regime on track that’s for sure. After paying our couple of Euros each we were able to take in the awesome views up and down the coast and over the nearby countryside. They were very impressive but the castle itself is very much a recent renovation special with little of the original structure left to be seen. It did have a number of historical displays throughout plus a glass floored box that protruded out over the cliff which was almost enough to freak Karen out. It’s a long way down to the water and rocks below. All in all the castle was certainly worth both the price of admission and the climb. 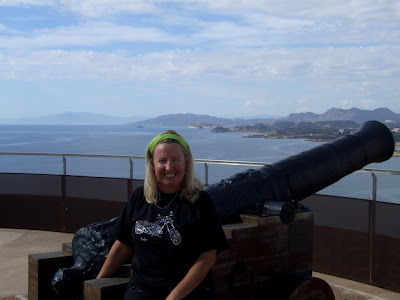 We made our way back down to the boat and had lunch aboard before casting off after a very nice and free stay on the town wall.  We were now moving a little further west to Garrucha. There was very little wind so again the sails never saw daylight on the short hop. We had chosen Garrucha as the pilot guide book showed it as having a well protected harbour with plenty of anchoring room inside if you didn’t want to use the small marina itself.
Weren’t we in for a surprise when we rounded the breakwater and discovered the whole harbour full of new marina pontoons. So much for anchoring. We were going to have to pay marina fees because it was way too late to be heading off anywhere else. We couldn’t raise anyone on either the radio or phone number provided so tied up on the fuel dock planning to go and find the office. No sooner were the lines on than a guy came down the pontoon and indicated in very broken English that there was no room and we had to go. We pointed across to all the sparkly new, virtually empty pontoons and asked about mooring there but he said, ‘Different marina. Government. No room here. You go.’ So as confused as we were we had no choice but to indicate that OK we’d go and he headed  away back up the pontoon.
We had no contact listing for the new marina but decided with dark thunder clouds now rolling over the hills we’d move over there, tie up and see what happened. Just as we were about to throw the ropes off, our marina man returned and pointed to the approaching storm and saying ‘Bad. One night you stay here. Go in the morning.’ That was fine by us so for the princely sum of 17 Euros ($21)we spent the night tied up on the fuel dock in pole position to fill up with diesel in the morning and move on.


Fortunately the storm rolled on by without dumping on us and we went off to explore the town and see if we could find out what the story was with the new, very nice looking marina in case we decided to stay here a day or two. The usual practice in Spain is that the government constructs the marinas and then leases the management rights to companies such a Real Nautico and a handful of others. We were able to find out that this marina had just been built but had not yet been leased. In the interim it was being run from the local government office and the good news was that it was very cheap. The bad news was the office was closed for the Spanish National Day holiday and wouldn’t be opening again until Monday. If we wanted to stay we could move over there and just squat on one of the pontoons but we’d have to climb the gates whenever we wanted to go ashore as with the office closed we couldn’t get a key anywhere. Good old government efficiency for you.


The town of Garrucha itself was yet another fishing port that had been overrun with hurriedly thrown up  tourist developments in the Eighties and Nineties which were by now all looking a bit tired and in need of some TLC. Very tacky really.  A check of the latest forecast and cruising guide showed there was a suitable anchorage available further west that should be nice and sheltered the following night so it was an easy decision to move on next morning.