The Mediterranean Sea was living up to its reputation of either having too much wind or not enough to sail so on Tuesday we were up nice and early to head further along the coast to Cartagena, unfortunately utilising the motor again. A bonus of rising early was a spectacular sunrise over the lighthouse on Cabo del Palos that produced a constantly moving tableau of colour over about 30 minutes.  Very nice, but somehow lost on Karen and Marc who would much rather have stayed in bed and just seen Rob’s photos later. 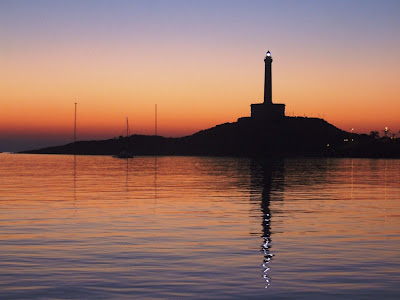 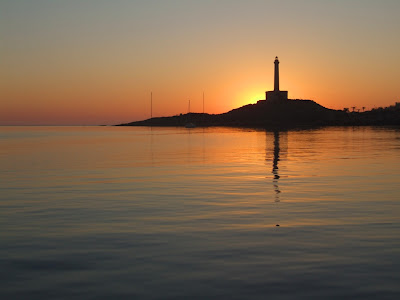 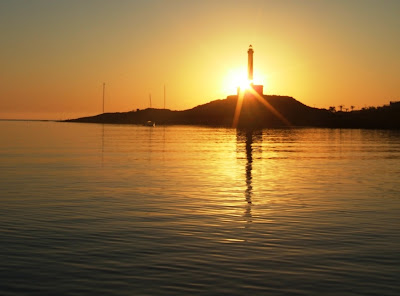 We had a fairly uneventful slog against a reasonable sized swell along the coast but did pass a massive fish farming set up in one of the bays that provided some interest.


The large natural harbour of Cartagena has been a big attraction to civilisations dating back thousands of years and has seen battles for control of this strategic site rage through the millennia. It was a major centre of Hannibal’s Carthagean  Empire and the Romans later built a major trading port and town on the site. Like most of the Spanish Mediterranean coast, Cartagena was controlled at different times back and forwards by the Moors and Christians. As recently as the Spanish Civil War in the 1930s, the Republican loyal port was the target of a massive bombing campaign by Franco’s allies, Nazi Germany and Fascist Italy.


It is now Spain’s major Naval port in the Mediterranean and we followed a large war ship into the harbour being very careful to stay out of its way. Anchoring is not permitted anywhere in the entire bay so we had no choice but to moor in one of the port’s two marinas. Having visited here on Moksha back in April we were familiar with Real Club de Regattas and had phoned ahead to make our booking. As we entered the harbour proper we radioed  on Channel 9 to get directions on where we were to tie up and were instantly answered by the opposition marina Moor directing us further into the bay to their establishment. We said thanks for the directions, picked up the mobile and phoned ‘our’ marina who apologised and said they’d been trying to reply via VHF but the opposition had got on the transmit button faster. Competition for clients must be tough here. At just under 40 Euros ($49) a night for our 43 footer we wouldn't call it cheap but it is a lot better than the 153 ($190) we'd paid for a hell hole marina at San Antonio on Ibisa. 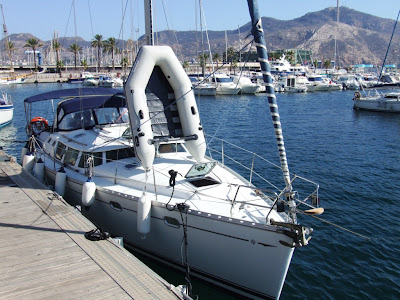 We were directed in and soon found ourselves tied up against the actual town wall in almost the identical spot we had been with Moksha back in April. As when we were with Moksha,  Karen headed off to the Laundromat with piles of washing while the boys got stuck into making the most of unlimited fresh water with a major bow to stern clean up job on the boat. Rob even took each of the fenders off one by one and gave them a big scrub up just as he had done six months ago. We were left with a very spic and span boat attracting plenty of admiring glances from tourists and locals alike as they promenaded past.  It did all feel a little ground hog dayish and brought back memories of our departure as crew on the big Shipman 72 and the start of our path to buying Alcheringa.


Wednesday was dedicated to being a tourist day as we did a museum crawl starting with an excellent Spanish Civil War museum located in an air raid bunker that had been excavated into the solid rock behind the harbour. It contained the usual historic artefacts but also had a range of excellent audio visual presentations with ordinary people who had lived through the intense bombing  the town was subjected to telling their stories of how they had got on with their lives during the conflict.

One old timer told the tale of the city’s most effective defence from the early night raids that marked the start of the aerial assault. A massive grid of lights was set up in empty fields just outside the town and when the bombers were on their way the power to the town was cut off and all the lights in the field illuminated. Night after night the fascists bombed an empty field. Unfortunately in the face of no opposing aircraft and very ineffectual anti-aircraft fire they soon switched to extremely destructive daylight raids. It was the very first aerial campaign in history directed at a civilian population and cost many, many lives.


From there we went to the top of the hill overlooking the harbour and the La Conception Castle. Here the city has made the most of the remains of a castle that dates back to the Moorish era with a museum that takes visitors through the complete history of Cartagena in a mix of the original structure and integrated new build. The views from the top are extremely impressive and well worth the visit alone.


Next we descended into the main town centre and took in the Roman era museum and linked Roman Theatre.  Here visitors enter opposite the stunning town hall building and make their way through a series of display rooms spread over a number of levels and emerge through a tunnel into the Roman amphitheatre itself. It is extremely well done and one of the most impressive attractions we have visited in Spain, probably only topped by the amazing Alhambra in Grenada. 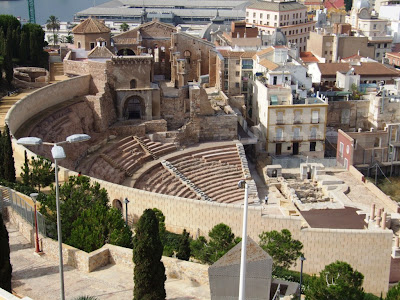 We’d had a very full, very interesting, and very enjoyable culture filled day. Cartagena did a marvellous job of rebuilding with soul after the carnage of the civil war and is now working extremely smart and hard to position itself well as a major heritage tourist destination set far apart from the usual, ugly high rise slums of much of the Costa del Blanco and Costa del Sol.


However, there’s only so much culture a body can take so rather than the excellent regional fare offered at many wonderful Cartagena restaurants that we’d enjoyed the previous night, this evening we dined in style at a fantastic Hot Dog stand in the old town. The deluxe deal even came with a beer along with the best, and only, hot dogs we’ve eaten in all of Spain. 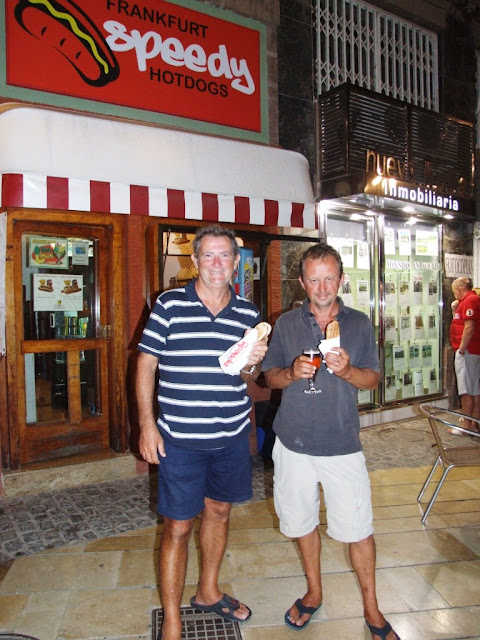