While the weather was staying mild rather than wild, our plan was to continue day hopping in no particular hurry along the Spanish coast towards Gibraltar. We now had the rest of October to cover only a few hundred miles so we were out to make as many stops as we could while the sun shone but prepared to hole up somewhere safe for a while if the weather turned nasty.


From Alicante our next stop was only a couple of hours sail away at Torreveijo, not far from where we had stayed for a while in our friend Sally’s apartment in late April at the end of our road tripping around southern Spain.


Our Friday sail to Torrevieja turned into another motor for much of the morning as weather forecast grib files we’d downloaded proved totally wrong in both wind strength and direction. Thankfully we were able to get the sails out for a couple of hours in the middle of the day putting us in a much happier frame of mind  as we entered through the large breakwaters of the harbour.


Torrevieja is one of the few totally secure anchorages on the this section of the Spanish coast. Although it features two large marinas there is also plenty of room to anchor in the outer harbour well protected behind the walls. Alcheringa was soon resting quietly, oh so very nice and smooth and we were all looking forward to replenishing the sleep bank after the rolly polly of Alicante.


As we settled back in the cockpit to relax after our trip Karen spied something happening on the Belgian yacht anchored in front of us that almost made her spill the G and T. She was questioning her own eyes and had to seek the boys confirmation that she was really seeing what she thought she was seeing. Now we’ve got very used to naked bodies all over the beaches here in the Med and yachties showering on deck is common place, at times even in marinas, so by now we sort of just go with the flow. However this was a first.  As a low howling noise reached across the short distance between the boats, we faced our first ever case of legs high in the air, bonking on deck in broad daylight. We’d love to be able to report that the couple looked like Venus and Adonis but unfortunately they were more like naked versions of Mr and Mrs Michelin going at it very energetically and vocally. We quickly decided we would be moving the boat in near the beach in the morning and well away from our Belgian neighbours in case of possible encore performances.


Late that afternoon we watched a very nice yacht approach the entrance to the harbour, turn into the wind just outside before dropping its mainsail very quickly and completing their turn through the breakwaters. Rob commented on how smoothly their whole process had been despite just two people being aboard. Then as the yacht drew closer he realised he recognised the boat.


She was Distant Shores 2 which is sailed by Canadians Paul and Sheryl Shard who produce a television series about their cruising life. They’ve been sailing two up since the mid-nineties and it shows. We had obtained DVDs of their first five series and watched them all when we were at home planning to begin our own cruising adventures. Their first couple of series covered their time sailing the Mediterranean on their earlier boat Two Step and had proved very informative and quite useful to us even now. After giving them plenty of time to get settled into the marina, we took the dingy over and introduced ourselves. They were both most welcoming and we had a good long chat about cruising, television and future plans. They also were heading for Gibraltar but only as a staging stop before making their way down to the Canaries and then on to the Caribbean with the Atlantic Rally for Cruisers. You can find out more about the Shards and their excellent TV Series ‘Distant Shores’ at www.distantshores.ca or their facebook page.


Next morning we were preparing to up anchor and move in close to the beach away from our Belgian bonkers when Paul and Sheryl swung by our boat on their way out of harbour to say goodbye and wish us well on our travels which was a nice touch.


We did move the boat and then went in to shore and had lunch with Sally’s mum Joan and her friend, also Joan. Being a local, Joan certainly knows all the best places to eat. 7.90 Euro for a very large three course meal makes it no surprise that so many Brits retire here. We’ve been told there’s also many Brit pensioners who take advantage of very cheap off season apartment rentals here because it’s cheaper for them to fly over with a low cost airline and stay in Spain for the winter than to pay for the heating at home. After lunch we took Joans one and two out to the boat for a cuppa so they could have a look over her and had a very pleasant afternoon.


Sunday October 7th saw unreformed petrol head, Rob, up at 4.00am following the Bathurst 1000 race (Australia’s equivalent to the Daytona 500) via the internet on Karen’s IPad. There was no online broadcast but only a lap by lap text update on the V8 Supercars site that had him hitting the refresh button with great regularity to get the latest news and positions. That might explain where all the 3G download disappeared to. What some people will do to get their fix.


After his favourites, the Triple 8 racing team, had claimed first and third on the podium we went in to a marina café and enjoyed a 3.80 euro big breakfast and took advantage of their wifi to skype the family for much of the morning. The whole clan were at our daughter Yasmin’s house to celebrate her younger sister, Felicity’s, 25th birthday. We worked our way through kids, grandkids and Karen’s parents chatting for ages. After finally saying all our goodbyes we headed back to the boat feeling decidedly homesick.


After lunch we made our way a short hop west along the coast and anchored off the beach at Puerto Thomas Maestre.  Here a one and half mile long canal connects the Mediterranean with Mar Menor, an extraordinary inland sea 12 miles long and 6 miles wide, about 20 by 10 kilometres. It’s separated from the Med by a narrow strip of sand, La Manga, which has been well and truly over developed with high rise apartments and resort. Most of the water is five to six metres deep with five islands dotted throughout and Mar Menor even features a Naval Air Wing base at San Javier Harbour in the north west corner. There’s a lifting road bridge over the canal with set opening times just twice a day and our plan was to head in to spend a day or so exploring this unusual piece of water. We’re sure most cruisers simply sail on by so we thought it would be cool to go in and have a look at something very different.


Our overnight stop waiting to enter Mar Menor was a very nice calm anchorage off a deserted beach completely lined with very new, very empty high rises. There was not a single light on in any of the buildings after sunset. From what we’ve seen so far the occupancy rate of holiday accommodation in Spain must be well less than five percent. Almost everything is empty. We did enjoy another great sunset though. 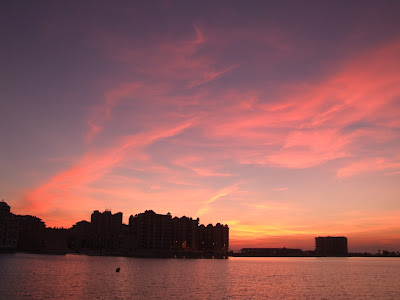 As the lifting bridge was scheduled to open at 11.00, after breakfast on Monday morning the anchor came up at 10.30am to give us time to get around the breakwater and in through the canal to Mar Menor. The channel in the canal is supposedly dredged to four metres but three or a bit less in places proved to be closer to the mark so we were taking things fairly carefully. As we approached the very swoopy, modern looking bridge right on 11.00 hours there was absolutely no sign of movement. We checked the exact time on Rob’s IPhone and made sure we weren’t early but as we idled very slowly closer there was still no sign of life. Our pilot guide book listed VHF Channel 9 as a contact for the bridge operator so we called it up asking for access and received a speedy reply in broken English, ‘English sailboat, bridge broken. Don’t know open today, maybe tonight, maybe tomorrow.’


Fantastic. Only in Spain. We thanked him for the information, performed a careful u-turn in the very narrow channel and disappointedly retraced our steps back out of the canal. OK! Time for a plan B, except this time we hadn’t thought about a plan B because Mar Menor was totally sheltered regardless. A quick check of our pilot guide and we motored eleven miles west and anchored in another nice calm spot  just off the beach in the lee of Cabo de Palos.


The outboard was soon on the dingy and we were away to explore the town which proved to be a  little gem. It featured a small harbour and marina catering mainly for local fishing and dive boats. An Italian passenger liner had been torpedoed nearby in World War One and then ran for shore before sinking in shallow water just off the coast. It has since become a very popular dive site supporting a healthy local industry.


We had really been looking forward to sailing Alcheringa on the inland sea of Mar Menor but consoled ourselves with a nice lunch overlooking the harbour entrance. On our way back to the boat we also stocked up with goodies from a great little bakery. Good food and drink helps you get over all sorts of life’s disappointments.