Sailing by Hinchenbrook to Orpheus Island


After a week at Dunk Island it was definitely time to get underway again. We had two options. We could go south via the Hinchinbrook Channel  or sail down the seaward side of the island. The plus for the channel was that everyone we have spoken to who has been through it says it’s absolutely beautiful. The negatives we’d been advised of were swarms of mosquitoes and sand flies which make life uncomfortable when anchored at night and the presence of many large crocodiles so no swimming or crabbing as the crocs break pots up to steal the bait. 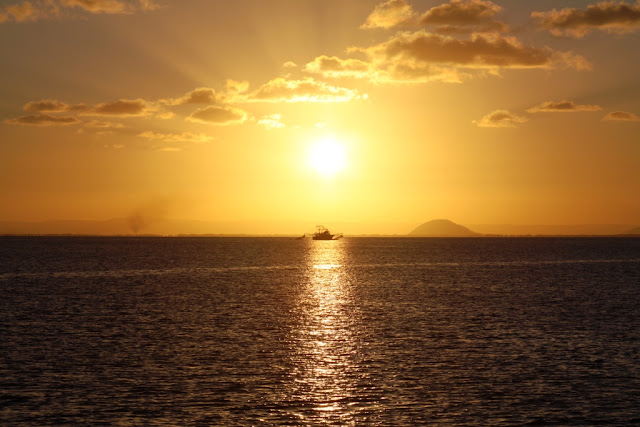 Given it was forecast to be a warm, windless night, the prospect of spending the evening locked below to avoid being eaten alive by bugs wasn’t very appealing so we elected to take the seaward route and make a stop at Zoe Bay on Hinchenbrook Island where we’d read there is a National Parks walk to a waterfall and rock pool. Once more we had a Plan B which involved continuing straight on to Orpheus Island if conditions proved unsuitable at the anchorage in Zoe Bay.


The wind was quite light from the east as we cleared the western end of Dunk Island making progress under sail alone impossible. However, motoring on our course there was just enough apparent wind angle for us to fill the main and stay sails which provided a more comfortable and fuel efficient ride.


We skirted by Bedarra Island to have a look at the now closed Bedarra Hideaway Resort. Rob had done some work there many years ago in its heyday as a very expensive, exclusive resort and was keen to see how it had fared in Cyclone Yazi. The jetty had been washed away but from our distance the buildings all looked to be fine so its non-operational status may have more to do with the economics of changing holiday consumer demand.


On the other side of Bedarra Island there are a handful of luxurious private residences. As we made our way past one of the island’s occupants arrived home in his helicopter. What a life.

Approaching the northern end of Hinchenbrook Island the true height of its impressive mountains becomes more and more apparent. The Island is a true "wilderness area," wild and rugged with soaring mountainous peaks. Its highest mountain is Mount Bowen, 1121 metres (or 3,678 feet) above sea level. The entire island is a World Heritage listed National Park with internationally renowned walks including the 32 km (20 mi) long Thorsborne Trail along the east coast taking in its varied topography from high peaks to mangrove swamps. 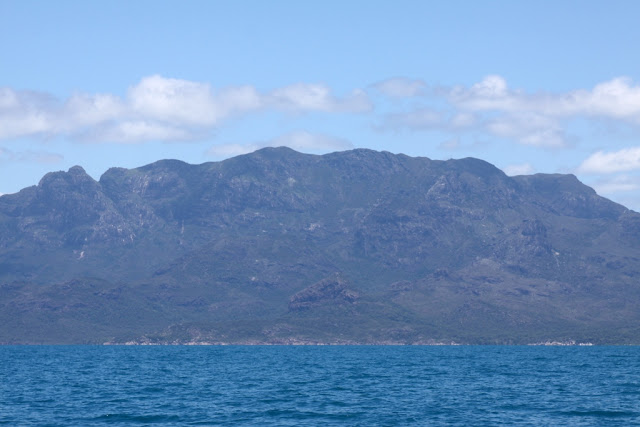 Unfortunately a reasonably sized easterly swell persisted as we approached Zoe Bay which we decided would make anchoring off its east facing beach quite uncomfortable so we reluctantly elected to activate Plan B and continue past to Orpheus Island.


On the way to Orpheus we skirted the western shoreline of Pelorus Island just to its north in a last ditch effort to catch a fish before entering the conservation green zone at Orpheus. True to recent form it was a wasted effort. The fish seem to know where the green zones are. Within moments of us reeling in our lines and entering  the conservation area, the water ahead of the boat boiled with tuna chopping into a school of bait fish much to our frustration.


After clearing the southern end of Hinchinbrook Island we sailed past he Lucinda bulk sugar terminal which boasts the longest service jetty in the Southern Hemisphere. At 5.76 kilometres long, supported by more than 660 concrete and steel pylons with its length actually following the curved contour of the earth. Sugar takes 22 minutes to travel along the conveyor from the on-shore storage to the shiploader.

We picked up one of the Great Barrier Reef Marine Park moorings in Orpheus Island’s  Pioneer Bay. We rarely use moorings as we prefer to trust our own anchor and chain than wonder what may be hiding under a mooring ball but the GBRMP moorings are very strong and well maintained so we have no hesitation taking advantage of them when available. 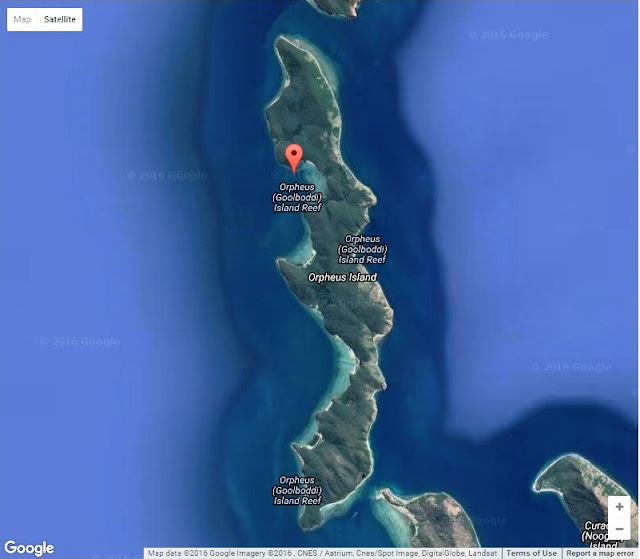 The wind blew 20 knots from the east the next day so we stayed put and got some exercise paddling all over the bay at low tide having another good look at all the lovely coral, giant clams and fish to be found here. Unfortunately after paddling over to the fantastic reef area packed with an unbelievable concentration of giant clams Rob discovered the memory card was full in the waterproof camera so no photos. Doh!

Have a look at the blog of our previous visit to this beautiful bay to see plenty of above and underwater photos HERE.