Kent Island in the North Barnards – An unexpected delight.


Unfortunately the moderate northerly wind of the previous two days disappeared overnight leaving us raising our anchor at Cape Grafton’s Wide Bay in the very still pre-dawn light for our next jump southward. We had a Plan A and B in place as we began motoring over the glassy waters. If the conditions were suitable when we got there, we planned to anchor 20 nautical miles away at Russell Island. If the anchorage didn’t look suitable we would keep going to Mourilyan Harbour another 22 miles further on. Our early start would ensure we had ample time if we found Plan B was required.

It was a very uneventful run down to High Island, a very attractive example of the heavily vegetated continental islands found off the North Queensland coast. It’s shoreline is a mix of huge granite boulders and palm lined sand beaches. There is an anchorage on the north western corner which would be OK in mild south easterly conditions but was not for us as 10-15 knots of northerly was predicted to come back in during the afternoon. We found the anchorage at Russell Island was a bit too well populated with local recreational boats for us so we activated Plan B and continued past towards Mourilyan Harbour. 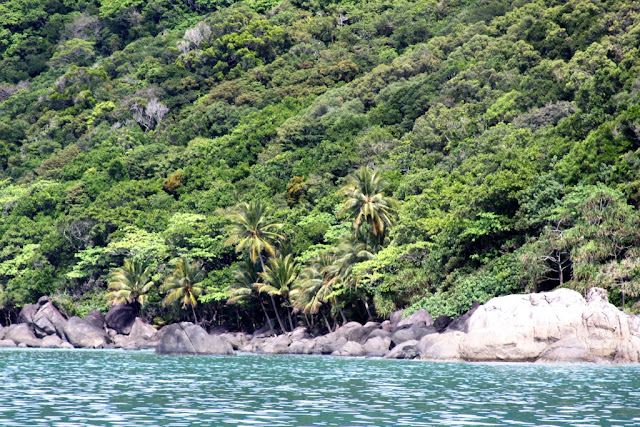 After droning along all morning under motor, the predicted breeze arrived when we were within ten miles of the entrance to the Harbour. It was so nice to shut the engine down and sail on a gentle square reach along the coast. We were enjoying it so much we had a another look at the charts and cruising guide and decided to ditch Plan B and move on to the newly formulated Plan C.  The North Barnard group of islands lay about 12 miles further south than Mourilyan Harbour. While Alan Lucas only talks of an anchorage suitable for modest south- easterlies in his book, ‘Cruising the Coral Coast’, by the charts it looked like the southern side of Kent Island should provide suitable depths and adequate shelter from the northerly for us to spend the night in comfort. The extra miles also gave us another couple of hours of very pleasant sailing.

We rounded the island and edged carefully in towards the southern shore with a very close eye on the depth gauge and were able to anchor in 8 metres of water just off the fringing reef. The high island provided plenty of cover from the breeze while we were far enough from the island’s eastern tip for the small swelling rolling around it not to reach us. Satisfied we were hooked in securely and had enough swing room to stay away from the coral we now had time to properly take in our surroundings.

At risk of over using a well worn phrase, we found we were sitting in another tropical paradise. The North Barnard Islands are beautiful. Amongst the islands in view a number of small beaches were in sight while the western end of Kent Island features a large, golden sand spit stretching towards its neighbour, Jessie Island on which we could see a number of sea caves well worth exploring. The islands are metamorphic rock outcrops whose rocky slopes are densely cloaked in rainforest, with diversity increasing with the size of the island. Mangroves fringe parts of the islands and coastal plants border the shores. The forested slopes of Kent Island rise steeply from the sea to a height of around 95 metres. A small lighthouse was built on it in 1897. The Barnard Island Group National Park is part of the 'sea country' of the local Mamu Aboriginal people. 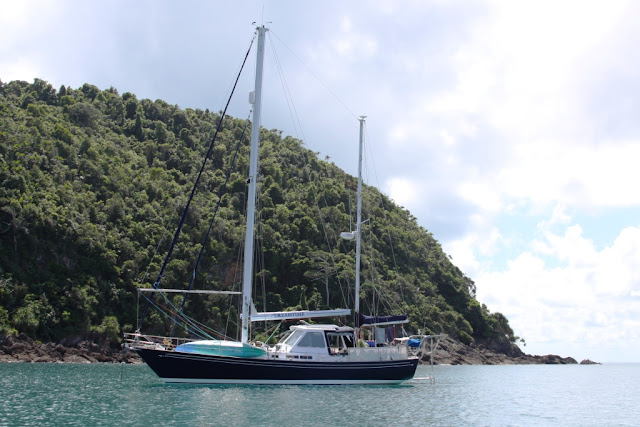 It took us about twenty seconds to decide on our third change of plan for the day. Rather than just an overnight stay here before moving on, we were both very keen to spend the following day enjoying this unexpected delight. Having the flexibility to change plans at will without the need to stick to a rigid schedule is essential if you want to be able to take advantage of these surprise discoveries and truly enjoy the experience.


After a very comfortable night we dropped the dinghy off its davits and began exploring the North Barnards. First stop was Jessie Island with its sea caves.  We landed ashore with crystal clear water lapping the small beach comprised of a mix of sand and broken coral. Karen was quickly combing through the masses of shells washed ashore. Pandanas trees clung to rocks down to the waterline while above, impenetrable vegetation cloaked the upper island.  The caves faced the south east trades and were stacked high with coral and shells driven before big seas. 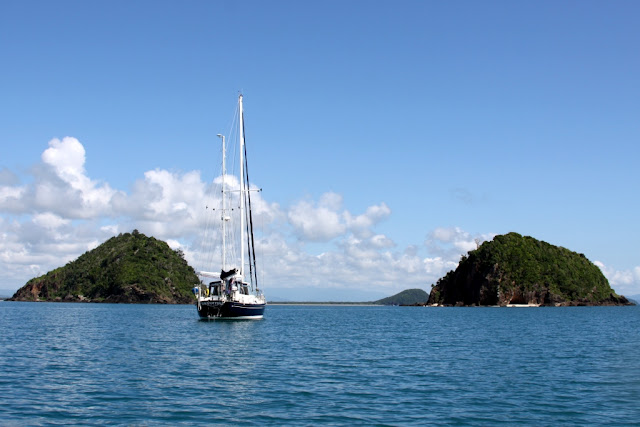 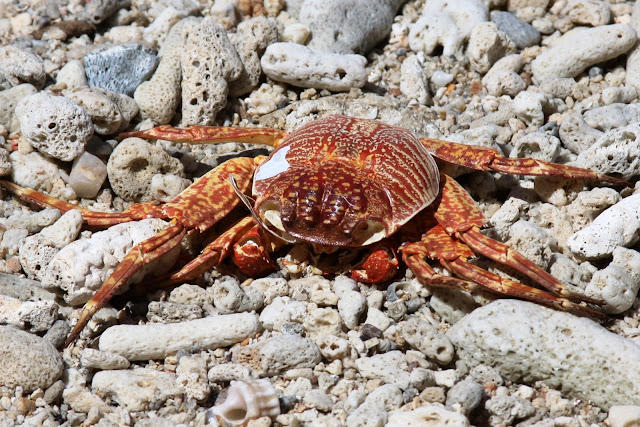 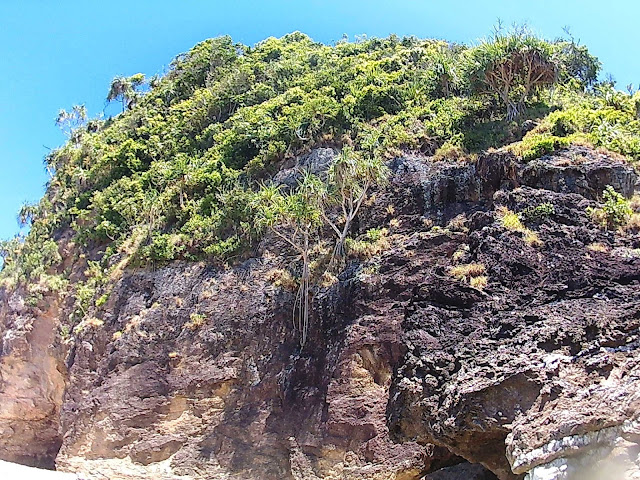 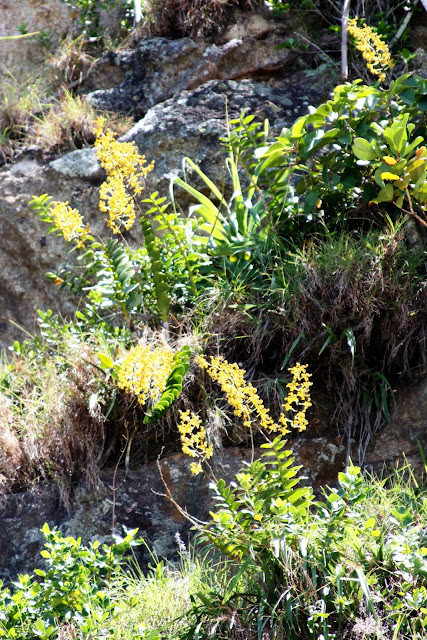 Over the millennia three openings have been eroded  through volcanic rock at water level at one end of the beach through which the small northerly swells were surging through before rebounding off the rear face of the cave in a splash of bubbles. Karen discovered the action of the water created a natural spa which she happily immersed herself in before finding a nearby rock was perfectly shaped as an in water recliner. Isn’t nature wonderful. 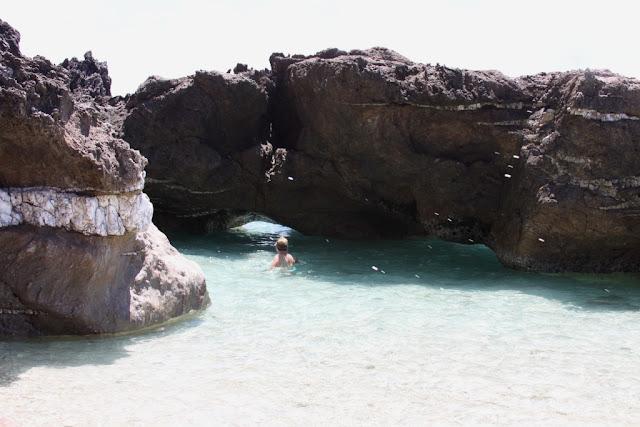 After enjoying all that Jessie Island had to offer we toured around between it and Hutchison Island in the dinghy having a good look at both islands before landing on the sand spit on Kent and having a nice wander around and a great chat with some locals camping on the island who are regular visitors. 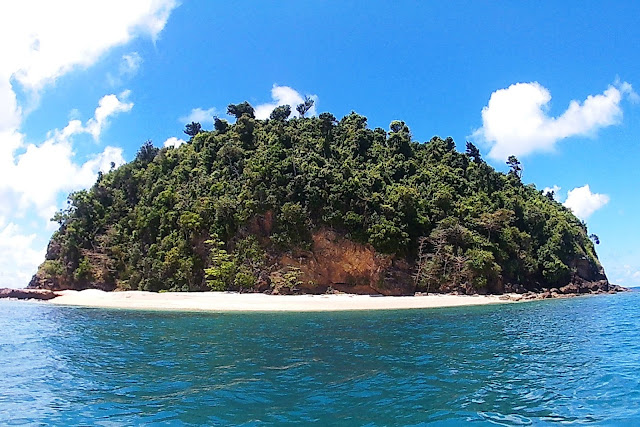 Then it was back to the boat for a bit of bottom fishing followed by sundowners. Our day the North Barnards was fantastic and a totally unexpected treat. With a 20 knot south-easter predicted to arrive late the next day, staying longer was unfortunately not an option but we are so glad we got the time here that we did. We love it when a plan works. Even when it’s Plan C.