As we had to wait until after three in the afternoon for the tide to come in and give us enough depth of water to get out of our berth at the Reef Marina in Port Douglas it was fairly late by the time we reached our overnight stop at Low Isles. All three public moorings were occupied so we went a fair way into the anchorage and dropped the hook in 4.5 metres over good sand. We then kicked back and enjoyed the sunset.


We planned a reasonably early start the following morning as we intended to overnight somewhere in the passage between Tongue and Batt Reefs. The forecast sub five knot winds were perfect for spending some time at the outer Great Barrier Reef. Rob had downloaded a lot of Google Earth imagery of the area and overlaid it on our Open CPN chart program. It was then a case of looking along the reef edges for likely looking spots which may be suitable to anchor. We identified three or four possible areas along the edge of Batt Reef that we would have a look at when we got out there.


Batt Reef gained worldwide notoriety on 4 September 2006. The Crocodile Hunter, Steve Irwin was on location on the reef taking part in the production of the documentary series Ocean's Deadliest. During a lull in filming caused by inclement weather, Irwin decided to snorkel in shallow waters while being filmed in an effort to provide footage for his daughter's television programme. While swimming in chest-deep water, he approached a stingray with an approximate span of two metres (6.5 ft) from the rear, in order to film it swimming away. According to the other cameraman in the water with him, “All of a sudden [the stingray] propped on its front and started stabbing wildly with its tail. Hundreds of strikes in a few seconds”.
The barb pierced Irwin’s heart. The stingray's behaviour appeared to have been a defensive response to being boxed in. Crew members aboard Irwin's boat administered CPR and rushed him to Low Isles where medical staff unfortunately pronounced him dead at the scene.


Steve Irwin’s death shocked people both here and abroad. Having firsthand experience when Karen was struck in the ankle by just a small stingray we believe the venom injected by multiple strikes to the torso by a two metre specimen may not have been survivable regardless of the injury to his heart. We absolutely love seeing stingrays gracefully gliding through the water but we definitely give them a very wide berth these days.


Wind and sea were both dead calm when we weighed anchor. The moment we were out of the Low Isles conservation green zone the trawling lines went in the water as we were very hopeful of picking up some nice fish around the reefs. A little over an hour later we entered the wide passage and began running along the edge of Batt Reef in search of a fish and an anchorage. The first potential spot we had identified in the satellite images looked like a good sized lagoon with a reasonably wide entrance through the coral from the deeper water of the passage.


We have fast become big fans of the Google Earth – Open CPN combination as we would have never found our intended anchorage without it. Despite motoring slowly reasonably close to the reef edge there was no way we could pick the entrance by eye. Instead we relied on using the Open CPN to navigate to a position directly off the entrance then turned 90 degrees and carefully made our approach with Rob on lookout duty up front relaying info by radio back to Karen on the helm.  Sure enough, from his position as high as possible on the bow he could then identify the coral heads to port and starboard exactly where they should be.
We edged inside the lagoon which was easily the size of a couple of football fields and found a sandy spot to drop the anchor in seven metres of water. After making sure we were well hooked in the first order of business was to drop the dinghy and do a quick check in all directions around the boat to make sure there were no hidden surprises for us close by. There was a ring of four coral bombies about 30 metres around our stern which only looked about a metre below the surface as the water was so clear. It wasn’t until Rob put on a face mask and had a proper look that he could see they were at least three metres down and not a concern. We now had our own private, well sheltered anchorage on the outer reef with not another boat in sight. It was perfect.
Even better, Batt Reef is a yellow zone so recreational fishing is permitted. We were disappointed we’d struck out with our lures on the way over so quickly had the rods out chasing whatever may be around the coral outcrops by the boat. We landed three nice plate sized sweetlip and a parrot fish but our biggest catch had to go back. Rob was very excited to also land a good sized fish that we weren’t immediately able to identify. A check of our fish chart showed it was most likely a ‘Paddle Tail’ which are totally protected so after a quick photo opportunity back in the water it went.

The rest of the afternoon was spent snorkelling around enjoying the amazing underwater delights of the reef. Once more we did see the extensive coral bleaching that the northern reefs have suffered due to the extreme weather events of the last couple of years but there was more than enough healthy growth areas interspersed to keep Rob busy with the underwater camera. We can only hope the reefs are able to regenerate and we see the ratio of bleached to unbleached coral reverse over time. We were also constantly surrounded by an abundance of brightly coloured fish of all shapes and sizes and saw a number of giant clams. We did spot a shy turtle in the distance which unfortunately sped off pretty quickly without posing for the camera. 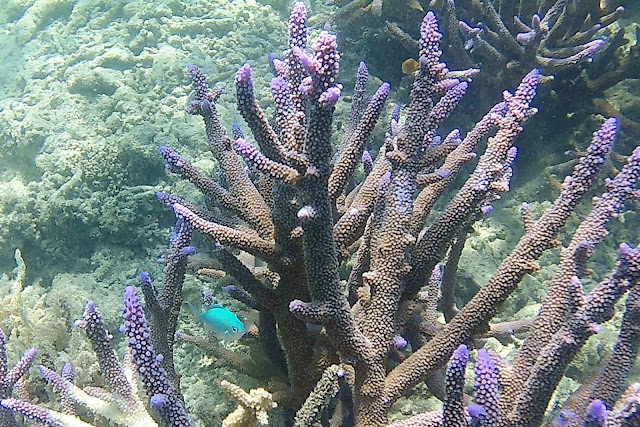 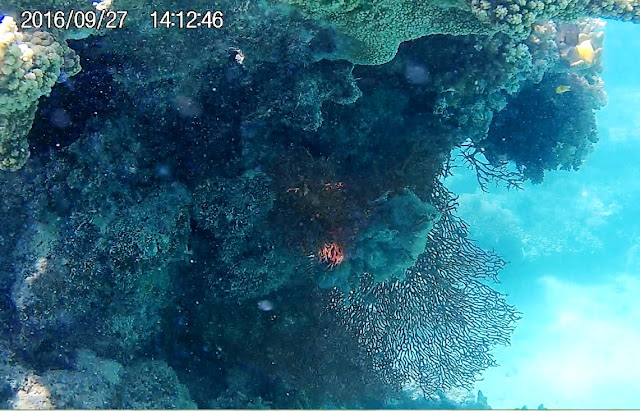 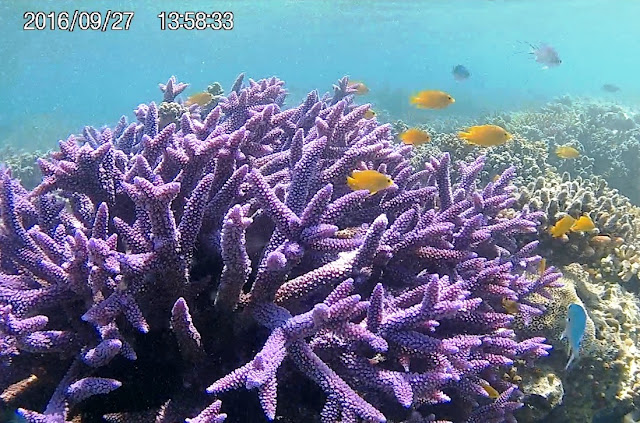 Later while sitting on the stern with a glass of cold bubbles experiencing an amazing sunset, we agreed this was the sort of place we could happily stay as long as the weather let us but, with light northerlies predicted for the next few days, the time had come for us to begin making our way south.  We have a lot of the Queensland coast to cover before the start of the cyclone season so Batt Reef was to be a one night stand – this time.