In the Whitsundays at last – Shaw Island

21 October 2015
After days and days of south easterlies, the wind was finally forecast to swing to a north easterly so it was definitely time to leave our cosy spot on Brampton Island’s northern shore and move on. We decided to sail to an anchorage on the southern side of Thomas Island which looked good on the charts and enjoyed good reviews in both of our cruising guide books we were carrying.
We made an early start to the trip to make the most of the wind before the northerly change came through. As Brampton grew smaller over the stern railing, the breeze persisted from the South East in the 10-12 knot range giving us a fairly gentle downwind sail.
We spotted a catamaran a mile or so east of us sailing south and our AIS revealed it to be friends from our time on the Indonesian Rally in 2011, Colin and his son Alex on Splashdown. We had hoped to catch up with them in Airlie Beach but now they were taking advantage of the predicted break in the ever persistent south-easterlies to run for home on the Gold Coast. We were able to have a good chat on the radio though as we sailed by each other.
By the time we rounded Tinsmith and Linne Islands there was still no sign of the predicted wind shift so we elected to change our destination to Shaw Island further to the north. There are anchorages both sides of its western end in the bay of Burning Point or in Billbob Bay which would provide us safe options whether the wind stayed south easterly or did in fact swing north.
It had been quite an uneventful sail on relatively smooth seas. The sail trim needed very little attention and Ben & Gerry (our B&G autopilot) were doing a great job of steering the boat. We were very relaxed in the cockpit watching the world slowly float by when the sound of the ratchet on our fishing rod screamed loudly for a few seconds.
We were both at the stern very quickly peering out towards our trailed lure where a dark shadow in the water appeared to be lazily following behind stalking it. Rob grabbed the fishing rod out of its holder and eased out some line to drop the lure back towards the lurking shape. It also dropped back. He then reeled in some line and as the lure moved forward the shadow kept station about a metre or two behind again. The lure was alternatively eased then retrieved another two or three times as the game continued until suddenly the ratchet screamed as the line ran hard. The fish had taken the lure and was off.
As Rob slowly wound on the resistance a fair bit of line ran out before the reel started to hold it. The moment he tried to wind some back in the previously unidentified fish revealed itself emerging high out of the water and tail walking across the surface ready to fight for its freedom. We’d hooked a good sized sailfish. Ever the game fisherman’s daughter determined to try to land the catch, Karen screamed “How the hell do I back the boat up on the fish under sail?”
The short answer is “You can’t,” but it was all a moot point as our sailfish made short work of our tackle and busted free seconds later. Retrieving the line we found the swivel had broken. Rob suggested that it was probably for the best as trying to land an angry sailfish on our high stern without one of us getting impaled on its bill may have been a risky exercise. Karen would have none of that maintaining if we’d got it to the boat she’d have “landed the bastard.” Knowing her determination she probably would have. Excitement over, we resumed our near horizontal positions in the cockpit and continued our otherwise sedate passage to Shaw Island.
There was still no sign of any wind shift as we approached the island’s western extremity so we sailed around Burning Point and anchored in very calm waters of its bay. We were now officially in the Whitsunday Islands at last. 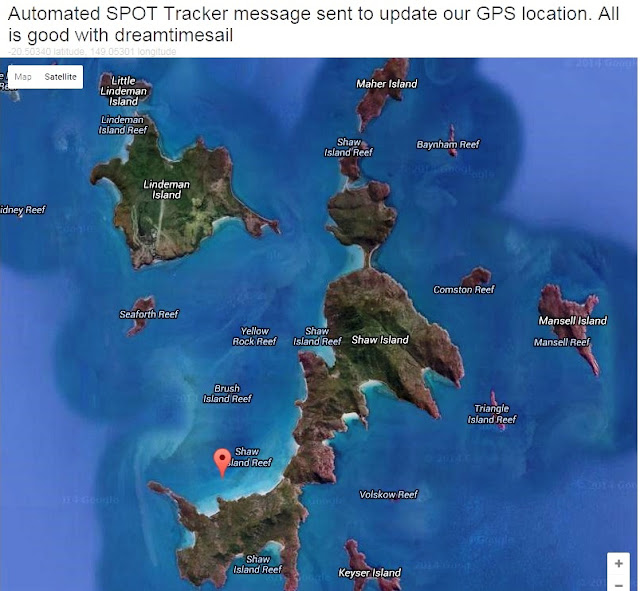