Airlie Beach - Where it all began.


The final step in our return to the Whitsunday Islands was a 10 mile sail around from Shute Harbour to Airlie Beach. This was where we had met 33 years ago during the week of the famous Airlie Beach Fun Race. An event contested by hundreds of yachts of all shapes and sizes from trailer sailors to Sydney-Hobart boats and even old pearl luggers all aiming to win the coveted line honours prize, a bottle of rum. Of course the miss figurehead title was also hotly contested by buxom young ladies. Rob sailed on a 24 footer while Karen made a slow trip around the bay aboard the lugger Dahlia. Little did we realise our chance meeting would lead to three decades of marriage so far and our family of three children and five grandchildren.


We were last in the Whitsundays five years ago for the start of our life changing move to become full time cruisers. We had passed through town on our way to spending a week doing our first RYA course sailing from Hamilton Island. Rounding Mandalay Point and seeing the changes that had occurred in Karen’s old home town in the relatively short intervening period was quite an eye opener. 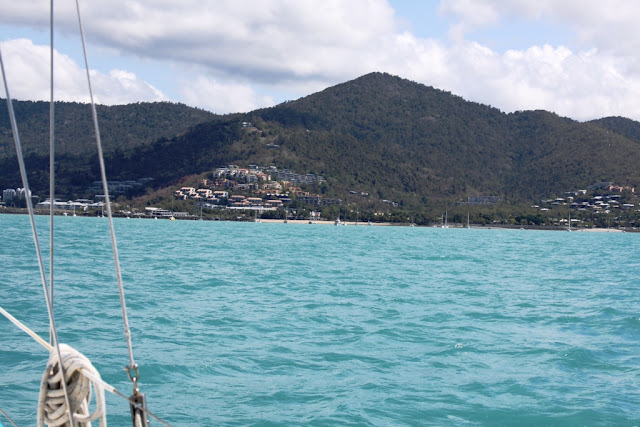 We anchored in the bay not too far from the Whitsunday Sailing Club on the point where our calculations told us we would be sitting in 2.6 metres of water at the lowest approaching tide. There was still about a 10 knot northerly blowing which made the anchorage a bit bumpy but we expected it to drop out during the night.


The anchorage at Airlie Beach isn’t anywhere you want to be if the wind pipes up much over 15 knots from the north west through north east as it can get quite uncomfortable. Any stronger than 20 and it can be dangerous. The holding is OK but not great and more boats have been lost here to strong northerlies than actual cyclones. A graphic reminder of this fact sat smashed on the rock wall behind us.

We were later told this classic timber ketch had been sailed all the way from the UK before dragging anchor and coming to grief in a strong northerly blow a few weeks prior to our arrival. Rumour had it that the live aboard owner was not insured and had done a runner rather than face the costs of the wreck’s removal. It was such a sad sight and sadder tale.


After arriving we spent a quiet afternoon onboard then really enjoyed the view ashore after sunset. The lights of the apartment buildings terraced up the steep hills behind Airlie Beach provide an unusual vista compared to the rest of the mostly flat Queensland coast. It honestly reminded us of the lights of the Italy’s Amalfi Coast we had enjoyed on Alcheringa in 2013.
The following morning we took the dingy into shore at the sailing club’s dock where we paid for temporary membership to be able to use all their facilities including the dock itself, showers, laundry etc and of course the excellent bar/restaurant.

Wandering the main street of Airlie Beach we were amazed at how much the place had changed. Five years previously, we hadn’t been all that impressed with the new Airlie. Now however, everything seemed right. The boardwalk around to Abbel Point Marina is fantastic, the new Port of Airlie Marina will clearly be a great addition to the town, the shops, cafes and bars all seemed vibrant and the swimming lagoon on the foreshore was well populated with people enjoying the sunshine. The whole place had a very good atmosphere.
After doing plenty of exploring we returned to the sailing club and freshened up with long hot showers. What a delight. Then it was upstairs for a very nice $15 steak lunch and a bottle of wine. We were in for a small surprise when we went to return to the boat. Our dinghy was sitting amongst a small fleet of ribs at the dock high and dry in the mud. So it was back to the bar for another bottle of vino while we waited for the tide to come in. Such is life!


We spent another three days anchored off Airlie Beach commuting in and out to the Whitsunday Sailing Club’s sometimes floating dock in our dinghy. We swam in the lagoon, wandered around revisiting old haunts including have a drink at the spot we first met and generally just had a good time ashore.


After all. Cruising is not just about the sailing but rather also enjoying the places you visit.