You can still get wrecked on Great Keppel Island

We planned to spend just two nights at Great Keppel Island. Plans change. Ten days after arriving we very reluctantly raised our anchor and left this slice of heaven. It wasn’t ‘Goodbye’ however but rather ‘See you later’ because we will definitely be back. 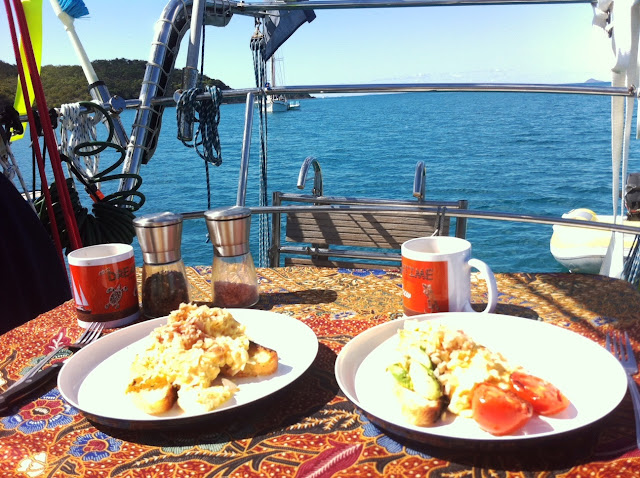 On our first morning at the anchorage in Fisherman’s Bay we went above to have our coffee and eggs on sourdough in the sunshine to find our boat surrounded by good size whiting clearly visible in the crystal water. We made short work of both cups and plates and soon had hooks baited and in the water. A nice feed of these small but very tasty fish was soon aboard for later.


We spent the rest of Monday morning exploring Shelving and Monkey Beaches around the point in our two man kayak before returning to the boat for our lunch of barbecued whiting.

In the afternoon we took the dinghy into the beach and checked out the small settlement in Fisherman’s Bay, including the pub at the Keppel Island Hideaway budget resort of course.

Our original plan had been to leave for Port Clinton next morning for another one day stop before pushing further North to the Percy Group of islands on the Thursday. Unfortunately, the updated forecast indicated gale force winds in Southern Queensland and 30 knot winds right along the Central Coast building from Thursday evening until at Sunday. All the advice we had told us that the Percys was not somewhere you wanted to ride out a strong wind warning as the anchorages are not very well protected from the swell. Reluctantly we decided to delay our departure until after the predicted blow.

We also got our first taste of ‘The Keppel Shuffle’ with most of the boats in Fisherman’s Bay, including us, moving around to anchor off Second or Svendsen’s Beach in readiness for the strong South Easters on the way. Those that didn’t shuffle, headed for the Keppel Bay Marina on the mainland at Rosslyn Bay.

So our Tuesday and Wednesday consisted of more kayaking, fishing, reading, a bit of blogging for Rob, sketching for Karen, eating, drinking and relaxing in the sunshine. All a bit hard to take really.

We’d been in constant touch with our Manly Harbour neighbours and good friends Bob and Lyn on the ketch Whoosh who had made it up to the Whitsundays ahead of us. We had hoped to rendezvous with them up there but due our delays in Bundaberg that was no longer going to happen. They were now making their way back southwards as Bob is soon to have to return to all cruisers hated four letter word, work. Our rendezvous would now take place at Great Keppel where they also planned to shelter until the predicted strong winds abate.
Mid afternoon on Thursday we spied Woosh approaching Svendsen’s Bay so we prepared an appropriate welcome with much waving and fog horn blowing to the bemusement of all others in the anchorage. We had a great sundowners session later on with nibbles, pizzas on the bbq, bubbles and beers.  We all had such a good time catching up with each other’s adventures we resolved to repeat the process on the morrow but start earlier with a BBQ lunch on Second Beach. 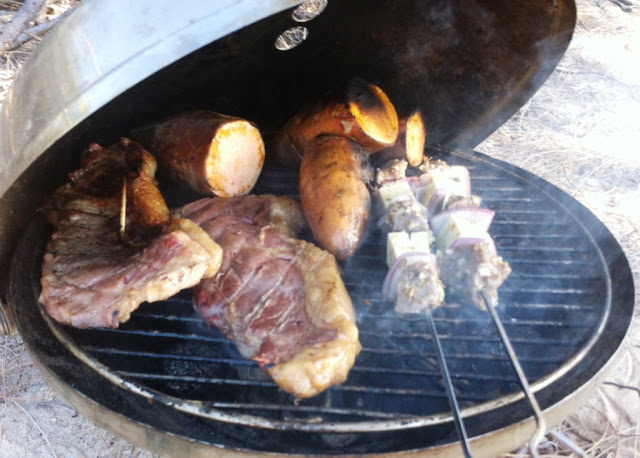 Long lunch was followed by a change of venue and sundowners with a number of other cruisers on the Svendsen’s Beach. More good craic. 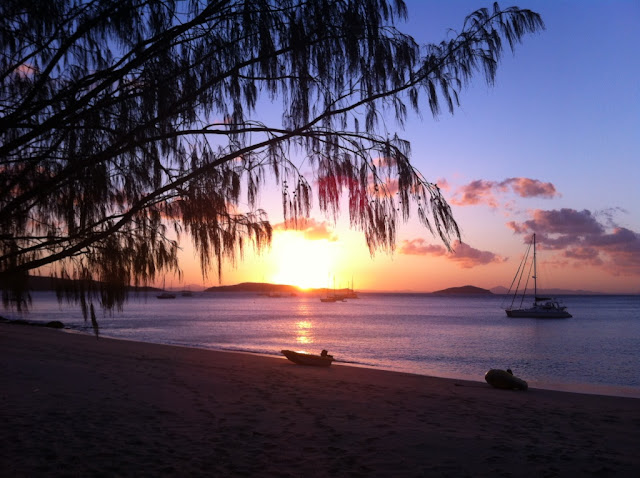 The wind had seemed reasonably moderate through Thursday evening and even Friday during the day but did pipe up that night gusting well into the twenties despite us being protected by the island’s high hills.

The wind continued to blow on Saturday as predicted but that didn’t stop the intrepid Whoosh and Our Dreamtime crews from embarking on a passage from Svendsen’s across the bays past Second and Leake’s Beaches to round Putney Point to The Spit in our dinghies. The purpose of this windswept ride over the waves? Lunch at the Hideaway Pub of course.  After a very convivial meal it was time to head back to our boats for a brief rest before another edition of cruiser sundowners on the beach.

The shallow water in Putney Bay in front of the Pub was well protected from any swell or chop and with the wind blowing on our backs the temptation to open up the throttles on the outboards proved too much for Rob and Bob.  It was smiles all around as we streaked across the flat water to the point. Rounding the rocks to Leake’s Beach we quickly ran into the evidence as to why a strong wind warning was in place as we punched into the wind and chop. Water was splashing everywhere as we bounced from wave to wave. Despite copping the worst of the spray up front, the bow riding girls proved to be largely ineffective in shielding the two throttle jockeys behind, both also now drenched but determined to give no quarter. All good fun but safe to say, all four dinghy dashers required a change of clothes and a lay down before heading ashore again for sundowners. As always with sailors, much talk revolved around the weather. When would it ease enough to move on? Who was planning to go where and when to make the most of conditions. What was widely agreed on was that, if you have to be stuck somewhere sheltering from wind, Great Keppel is a pretty damned good place to do it.

Sunday morning we returned to Svendsen’s Beach in the dinghy where Karen settled in to paint some of the scenery in watercolour while Rob opted for some bushwalking on the appropriately named ‘Rob’s Walk’. The climb to the top of the island was quite steep but the track is very well marked and clearly well looked after with attractive signs guiding the way and even rest stops on the highest points where you can sit, catch your breath and enjoy the vista. The views were magnificent. The wind had dropped into the high teens and the waters on the North side of the island were so calm while a looking to the South or East from the high vantage point revealed a seascape of high swells smashing onto the rocks. 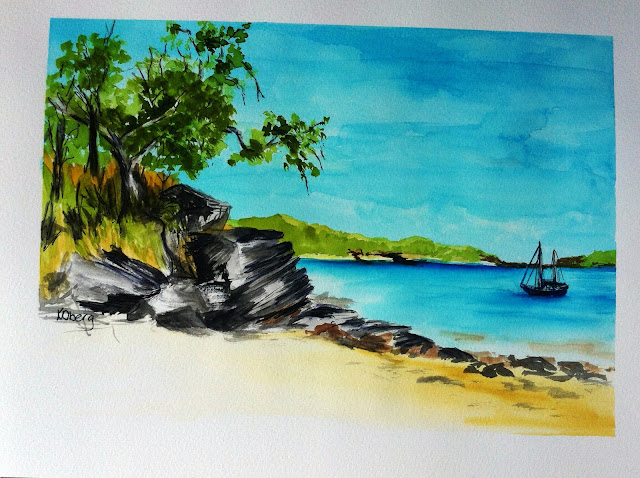 On the high tide that afternoon the Our Dreamtime and Whoosh dinghies were pressed back into service for another, but far less spirited adventure. Behind Leake Beach lays a vast salt flat and mangrove area drained by Leake Creek which flows into the sea at the Eastern end of the beach. The whole area dries at low tide but fills with the high. We’d been told there was an old shearer’s shed in there and we were off to explore. 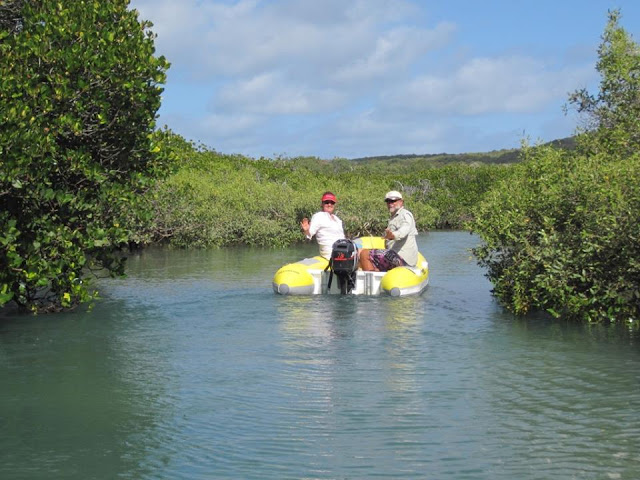 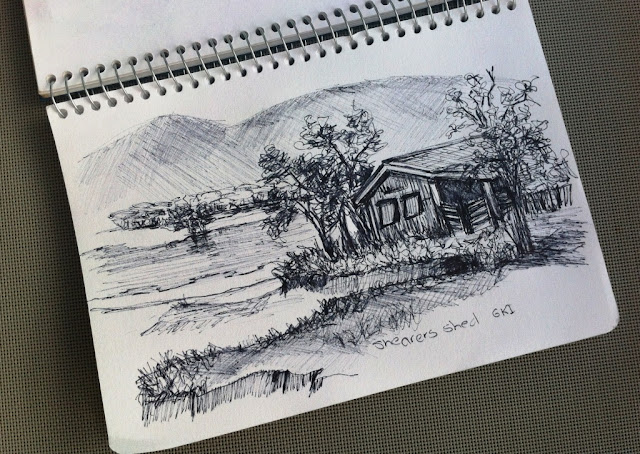 Rather than going ashore for sundowners again that night, we enjoyed a quieter time on board Our Dreamtime with Bob and Lyn. The forecast showed more strong South Easterlies due by Thursday so they were pushing on southwards at sunrise in the morning. They were keen to make it to Gladstone before being stuck for a while again. We’d really enjoyed their company at Keppel but could fully understand their eagerness to get underway again.
As much as we were enjoying the island, we were also keen to move on. However we were facing the same scenario as the previous week. If we took advantage of the couple of days easing in the wind to go north, we’d reach the Percy Islands just in time for another three day bout of thirty knot winds.

So we resolved to head over to the Keppel Bay Marina on Wednesday, sit out the high winds on Thursday, Friday and Saturday and then start North on Sunday. In the meantime all we could do was more kayaking, fishing, reading, a bit of blogging for Rob, sketching for Karen, bush walking, eating, drinking and relaxing in the sunshine. All a bit hard to take really. 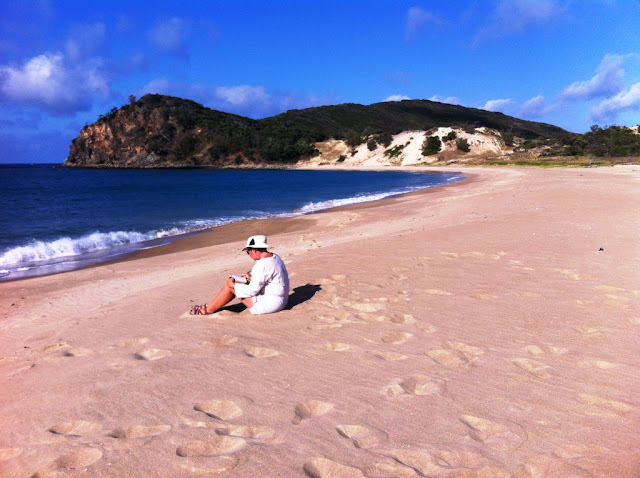 Back in the Seventies, when Great Barrier Reef Island family holidays were all the rage in Australia, the Great Keppel Island resort broke the mould and targeted the trendy, under thirties market with a sexy new advertising campaign. The island was pitched as the party island with TV adverts featuring sexy girls dashing off the golden sand beach into the crystal blues waters wearing no more than skimpy bikini bottoms with the slogan “Get Wrecked on Great Keppel Island,” plastered across the screen  It proved extremely successful marketing with the young singles flocking to the resort. Before long, an ‘I got wrecked on Great Keppel Island’ T-Shirt was about the coolest piece of clothing you could be seen wearing. Fast forward to today and the majority of resorts, including Great Keppel, have been closed as the thirst for overseas travel driven by cheap airfares has taken over.

The major resort may be mothballed but the island is still very much alive with a number of holiday homes, a budget resort complete with pub, a small retail outlet and even a pizzeria. Better still, it is all very uncrowded while the island’s breathtaking natural beauty is largely unsullied. We hadn’t planned to spend ten days here sheltering on and off from high winds but if we’d had to wait double that amount of time, we can’t help feeling it would have been far from bad. You can still get wrecked on Great Keppel Island. We did.