Another uninhabited tropical paradise all to ourselves - Hexham Island.


We awoke shortly after sunrise to the sound of chicks squawking loudly in their nest high on a rock outcrop directly behind Our Dreamtime’s stern. The brood was raucously letting their mother know they were hungry and ready for more food. What we hadn’t heard was every other boat in the anchorage upping anchor in the pre-dawn and beginning their run south over the waters we’d covered the previous day. We were alone at Hexham Island. Once more we had a private tropical paradise all to ourselves and we were going to make the most of it. The coffee was soon brewing and a quick breakfast prepared and enjoyed in the sunshine on the stern as we planned our day in paradise.


We were then soon on our way into Hexham’s golden sand beach in the dinghy.  Karen set up camp under a shady tree ready for a morning of sketching while Rob donned his hiking boots for a walk to the top of the island to see the views. Most of the island is covered in forest with lots of pine trees. There are no trails. It would be very tough going in any of the treed areas of the island due to the thick underbrush but the western end is far more open with a covering of half metre high grass. Like its neighbours we passed the day before, Hexham Island shows the scars inflicted by Cyclone Marcia nine months previous. There are many broken and downed pine trees still evident and greenery is a bit sparse on those standing . As nature does though, the foliage is recovering and the cyclone will be a dim memory in the island’s long history before long. 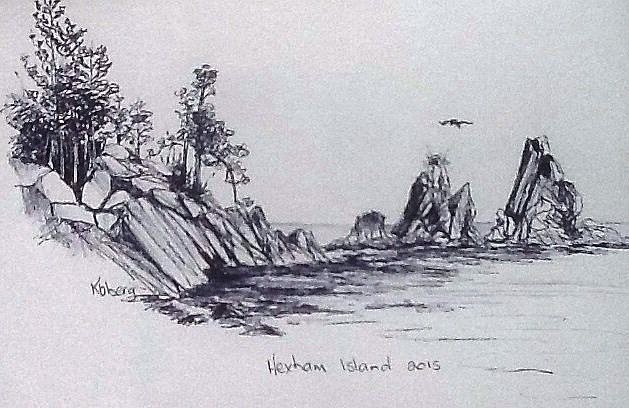 ﻿
﻿
The walk up the rocky, grassed slopes required a fair bit of care with every step placement. It was reasonably slow going but the views over the bay and surrounding islands were magnificent. 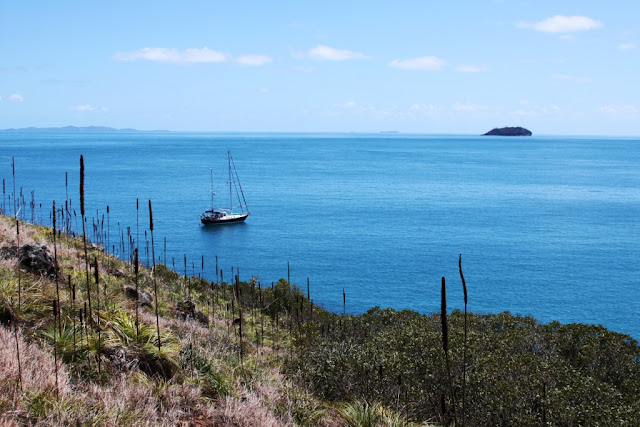 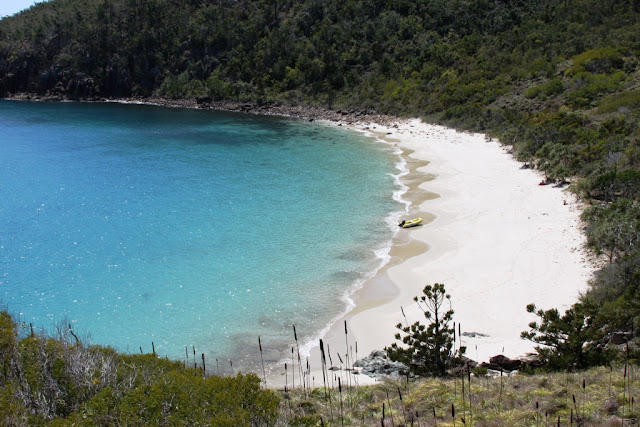 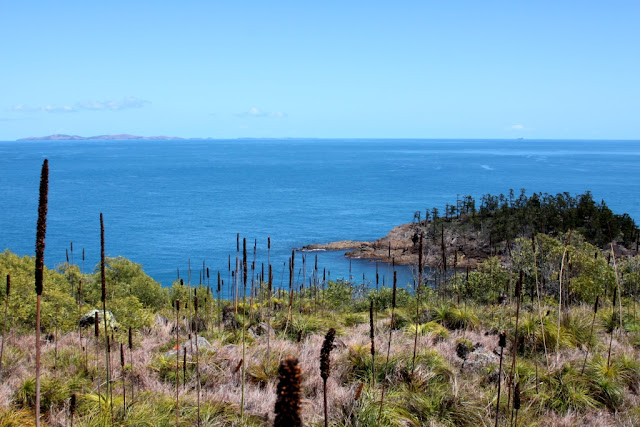 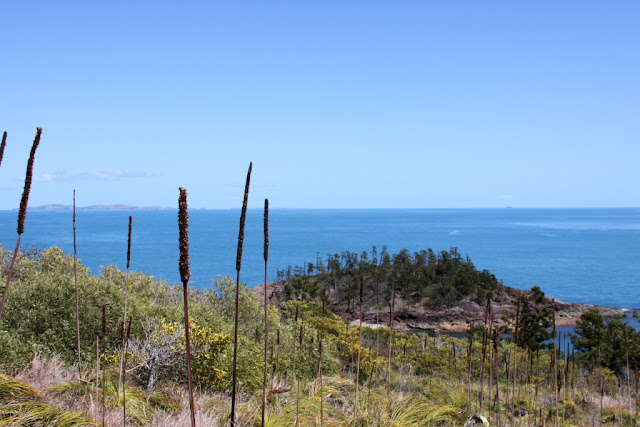 It was fantastic just sitting on a large rock at the top for half an hour and soaking it all in before commencing the tricky descent. Next a shorter but equally scrambling climb at the eastern end beckoned for some photos from the other angle. Once more the view made the effort well worthwhile.


On returning to the beach all the hiking gear was quickly shed for a refreshing soak in the bay’s crystal waters. We then dried off in the shade of our little campsite with a nice bottle of bubbles and some appropriate snacks. This private island business has a lot going for it. 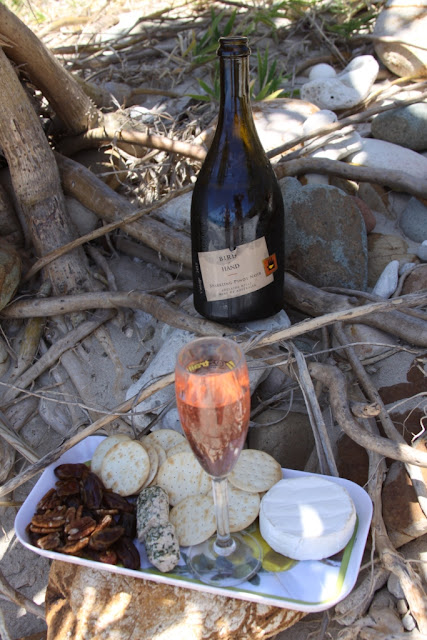 Mid afternoon sails began appearing of boats headed for the bay to anchor for the night so we made our way back to the boat after some exploring of the island’s coastline in the dinghy. 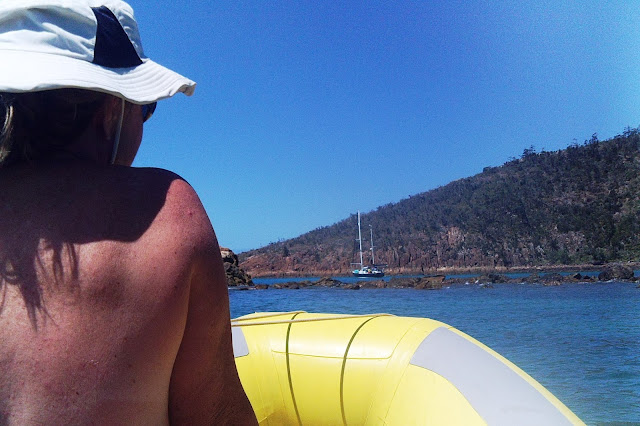 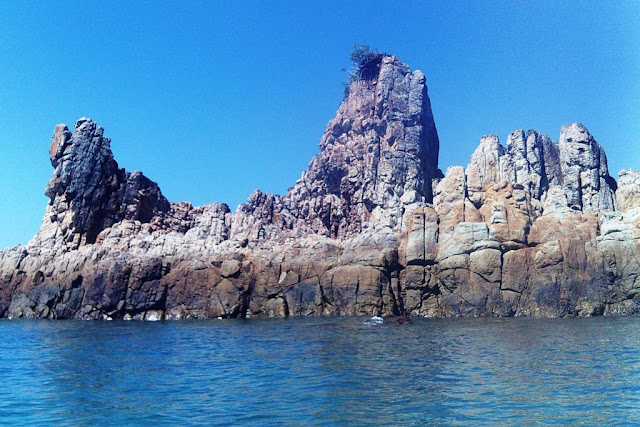 By the time we were treated to another spectacular sunset there were four other boats anchored  peacefully around us.  Our magical day had firmly put Hexham Island well up our favourite places list.

We try to be fairly easy going cruisers. Naturally some things other boaties do can be irritating but there’s a very good reason to keep those irritations to yourself.  Out on the water, you never know if that skipper you just gave a mouthful about anchoring to close to you with his noisy generator today may just be the person you need to help save your skin in an emergency tomorrow.


One thing really does get up our nose though. Many of Australia’s Great Barrier Reef Islands are protected National Parks. They are places of great natural beauty with wildlife insulated from many dangers including the threat of physical harm or disease from domestic pets. By law dogs are not permitted on these islands.


Despite this, we see many sailors who cruise with dogs on board dinghy them to the beach to do their business. Most are very responsible, keep their dogs below the high water mark then bag and remove their droppings thereby minimising any risk to the environment or native fauna. We have been dog owners all our lives and, for a period of time, showed and bred thoroughbred Airedale Terriers, so we are far from pet haters.


Unfortunately some boating pet owners are a long way from being either responsible or considerate. The powerboat that interrupted our morning at Hexham Island stopped for one reason only. They eased in close to the beach then let their two dogs loose before backing off into better depth. The dogs both took dumps then raced around the beach barking up a storm chasing birds for about twenty minutes while their owners drifted in the bay. They then took their boat back in close and called the dogs out into the water, hauled them aboard and high tailed out of there to continue on their day trip. WHY THE HELL take dogs on a day trip to National Park areas and, if you have to take a dog ashore, how hard is it to take any mess with you and dump it offshore later. Rant over. 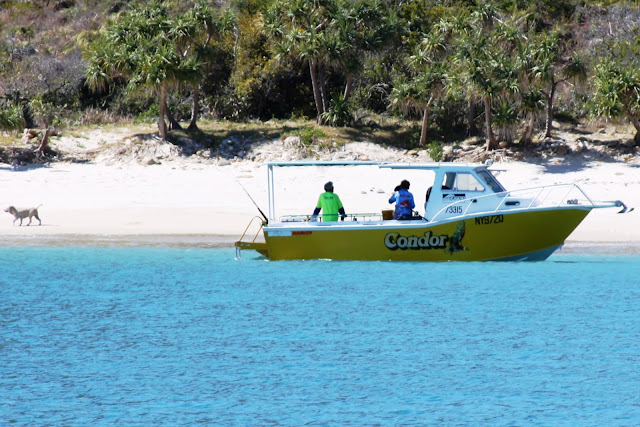