After two very nice nights in Cala Grazio we were on the move again. Right from the start of our planning for the Med we’d decided we would avoid staying in marinas as much as possible. Not only is it much nicer to be anchored in a lovely bay somewhere, but marinas in this part of the world have a reputation for being very expensive. We want to spend our meagre funds on cruising, not making marina owners even more wealthy.


Unfortunately a visit to a marina every now and then is a necessary evil as we have to fill our tanks with water. Although not at a critical level, we were running a little low by now and as we wanted to find somewhere to get the non-starting outboard fixed we decided to head into the marina in San Antonio for just Monday night. We planned to get the most out of of our time in port by topping up our water, putting the outboard in for repair, doing our washing, having some long hot showers, replenishing our fresh food supplies and making the most of the marina’s wfi to skype family and friends. With this great plan in place we motored the short distance around the point and arrived in San Antonio harbour by 9.30am only to be told over the radio  that we’d have to wait to be called into the marina and it would not be before mid-day. We found a spot amongst the masses of moored boats and anchored to wait, kissing goodbye to the productive morning we’d planned.


Almost all marinas here feature stern-to mooring often referred to as ‘Med Mooring’. We were a little nervous about this as we’d never actually done one yet. Sitting in the bay waiting we had plenty of time to plan our steps but unfortunately also plenty of time to worry about what could go wrong. In the end we weren’t called in until after one o’clock and found we’d been allocated a very tight spot with almost no swing room to get in between a big motorboat and another yacht. Yikes! This was going to get interesting.


It may not have been totally pretty, but we were able to manoeuvre Alcheringa into her berth with no damage to any craft or crew. We could now put a tick in the Med mooring box but the nerves were a little frazzled by it all.


With the boat now securely squeezed into her place on the finger we then headed for the office to check in only to find it closed for Siesta from 1.30 to 6.00pm. Great. No wfi password, no key to the amenities block, no one to ask for directions to find an outboard mechanic so all our plans for a super efficient marina stop were now totally out of the window. What next?


We weren’t very happy sailors when we returned to the boat and became even less so when a huge ferry berthed on the other side of the wharf directly behind our stern and almost blew us off the finger when it reversed its engines to stop. Thankfully there were a lot of fenders between the boats because we were all crashing and bashing together from the wake. The ferry was loaded to the gills with holiday makers cars and at least twenty semi trailers which made for extremely long and noisy unloading procedures.


We headed out of the marina in search of an outboard mechanic and a supermarket to try to salvage something out of the day. One of the yacht charter companies along the water front said they’d be happy to have their mechanic look at our outboard when he came in the next day. As our next intended stop was an anchorage just a couple of miles away we decided it would be no real problem to come back in on the Wednesday and pick it up. Marc and Rob then got a good workout taking turns lugging the engine the half mile or so from the boat. While Karen headed off to the supermarket the boys dropped in to a ship chandlery and discovered a whole new world of good stuff to drool over. They were able to source the right spare bulbs we needed for the masthead anchor light and also bought an inverter to step up 12 volt to 220 so Rob could use his laptop on board. Unfortunately though there were no spark plug spanners to be found to replace the one laying in the bottom of Cala Grazio.


When the marina office did finally open there was a line up of crews waiting to check in so it was well after seven by the time we finally provided copies of the boats papers, insurance certificate, and our passports. When we asked for the wfi password we were told we could have it but the signal doesn’t reach to our side of the marina. We then asked about laundry and were told it was leased to a service and was only available to marina guests on Wednesdays. We could however pay an exorbitant fee to have our laundry done but the service had a 48 hour turn around.


Fantastic, can’t get in till mid-afternoon despite vacant berths around the place but MUST be out before Noon, office closed, no key for amenities until after 7.00pm, blown, bashed and crashed every few hours by the wake from huge ferries, no wfi, no laundry and how much did we have to pay for the pleasure of one night in Club Nautico San Antonio? How about 153 Euro ($190). What a rip off. The clincher though was being handed a customer satisfaction survey to fill in as we left the office.  Our advice to other cruisers,  Avoid this place like the plague!


We did finally get our hot showers though and then walked into town to get some dinner at one of the many cafes. After sunset the streets, lanes and bars of San Antonio fill with predominantly loud, young British tourists getting a skinful before they head to the big clubs such as Pacha, Eden and Es Paradis that don’t open until late but go to dawn. Now we saw glimpses of the Ibiza we’d heard about. This place was very Triple B, Brits behaving badly, all brought to you by low airfares, very low cost booze, very, very low cut clubbing outfits, and many extremely low IQ individuals parading in t-shirts emblazoned with the likes of Shit that happens in Ibiza stays in Ibiza and Fuck me I’m famous in Ibiza. No doubt their Mum’s are very proud of them. 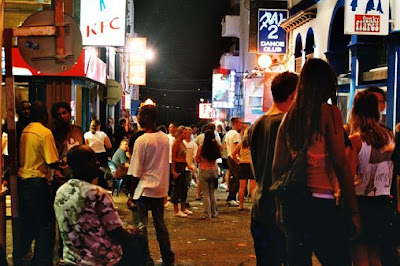 It really is not a very attractive place and we couldn’t wait to get out of there.