Ibiza City - Our first case of theft from the boat


We managed to get up early for our short hop up to Ibiza City on the east coast. Again there was no wind so it was just a case of motoring on over. The main harbour at Ibiza City is full of very high priced marinas with no room at all to anchor out. We decided we’d try our luck just around the northern point in the next bay, Cala Talamanca, rather than pay HUGE marina fees. We actually expected it to be crowded with boats but were very surprised when we arrived to find the large bay fairly sparsely populated and had no trouble anchoring fairly close to the shore. 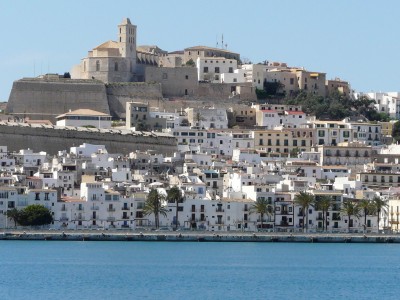 Being a bay in a major city, the water was nowhere as nice as we’d got used to but was still easily clear enough for Rob to snorkel and check the anchor set. Satisfied all was secure we took the dingy in to the beach then walked over the point and right around the marinas and port to visit the old walled town part of the city. It was extremely hot with no breeze at all to provide any relief and long before we actually reached the walls of the old town we’d already decided a taxi would be in order for the trip back later. We had lunch at a quiet little bar just outside the old walls and watched the world go by while we recovered after the hot walk.
Ibiza City existed as a significant settlement long before Roman times but although the current Old City only dates back to the 1600s it is packed with interest and charm. It covers all sides of the high headland on the southern side of the harbour and is well protected behind huge stone defensive walls. Crossing the moat and entering through the town gate gave us a real sense of the old world. From there it was up, up and up the narrow but steep streets and fairly hard work. Behind the high walls the day’s heat seemed greatly amplified. It was well worth the effort however we did pull up short of making it all the way to the big church right at the top. Rehydration was a priority and after a couple of hours wandering around in the heat, the much cooler harbour side bars were calling loudly.

Ibiza City is the epicentre of the club scene that the island is so well known for but during the day it’s much quieter as the holidaying clubbers are either sleeping the previous night’s activities off in their rooms or have headed out of town to the nearby beaches.


The place was certainly close to Marc’s heart though. He had come here as a 39 year old for what he described as one last, big blow out before turning old (40) and had been one of those clubbers sleeping all day and raving all night. Walking the streets of Ibiza City again stirred many happy memories for him. He was sorely tempted to hit the clubs again that night just for old times’ sake but, by the time we actually got back to the boat, the day’s exertions reminded him that he really wasn’t 39 anymore and of course there was another major hurdle, ‘What would I wear?’ Apparently the Helly Hansen sailing shorts his locker is full of aren’t exactly de rigueur in Pacha.
On our return to Alcheringa we were really disappointed to discover our first loss through theft whilst in the Med. We always lock up whenever we leave the boat even though we had previously encountered no sign of problems anywhere on our travels. Unfortunately, here, Rob had left his mask and snorkel hanging on the stern safety rail to dry after diving to check the anchor when we came in and they disappeared while we were ashore. They were his good set he uses scuba diving and far from cheap so he was very  unimpressed. The thought that someone had been on our boat was also very disconcerting.

The disappointing thing is that most thefts from yachts in the Med are actually perpetrated by other yachties. A former skipper of ours had even told us of a supposedly well known saying amongst English cruisers, 'We British equip our yachts to go cruising. The French go cruising to equip their yachts.' Apologies to our Franco friends. We personally are not so sure about the acuracy of that statement but regardless, we now leave nothing on deck whenever we leave the boat.
We had planned to spend a couple of days in the city but a low swell swept around the point into the bay all night causing the boat to roll quite uncomfortably making sleep a very interrupted affair. Next morning we decided we’d grab a few fresh food supplies from the nearby supermarket and head further up the coast to hopefully to a more comfortable anchorage before saying goodbye to Ibiza . After our extended period of windless weather, the forecasts now indicated that we may get a sailing breeze good enough to take us back across the sixty miles to Mallorca the next day but the wind was likely to be short lived. It was now or never if we wanted to sail.
With the galley reprovisioned we motored on up the coast and made as short stop in a marina at Puerto de Sta Eulalia to visit the fuel dock and fill up our 200 litre diesel tank and then moved on to nice little bay between steep headlands, Cala Boix. We arrived in plenty of time to enjoy a good snorkel around the rocky cliffs and into the beach which was comprised of very dark sand. It was obviously some sort of mineral base and we watched many people sit along the waters edge and literally  coat themselves in a thick layer of the wet sand. They would then let it bake on in the sun before washing off in the sea.

A moderate wind blew through the night but came straight over the cliffs so we were well protected from any swell and enjoyed a well needed sleep because we were heading to sea early in the morning.