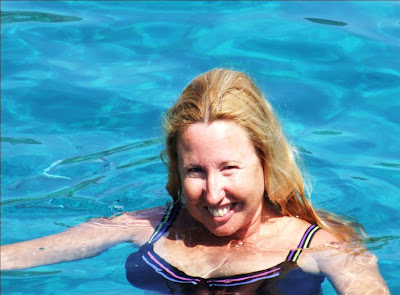 After three very enjoyable days at Cala Portinatx it was time to move on but where to? We’d originally only planned to be away from Palma for about seven to ten days, but that was a week ago. So far we’d only been to one bay on Ibiza and we were definitely not ready to sail away back to Mallorca. No rush. What the hell. Palma would still be there next month so we resolved to circumnavigate Ibiza and take in the neighbouring island of Formentera in the process. 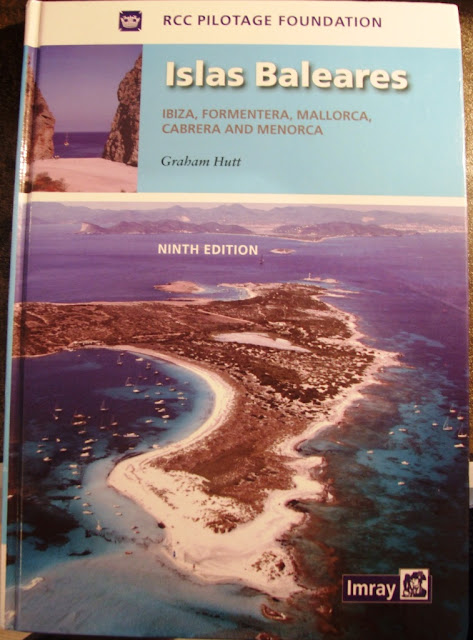 Now any cruiser will tell you that one of the most important pieces of equipment on board is the cruising or pilot guide for the area you’re sailing. These publications provide all sorts of useful information on subjects  from customs and immigration procedures, historical background down to where to find a supermarket and absolutely everything in between. Most importantly they list just about every conceivable anchorage on the relevant coasts with detailed maps, photos and descriptions of what’s there, how protected it is from what wind directions, where to anchor in how much water and numerous other tips. 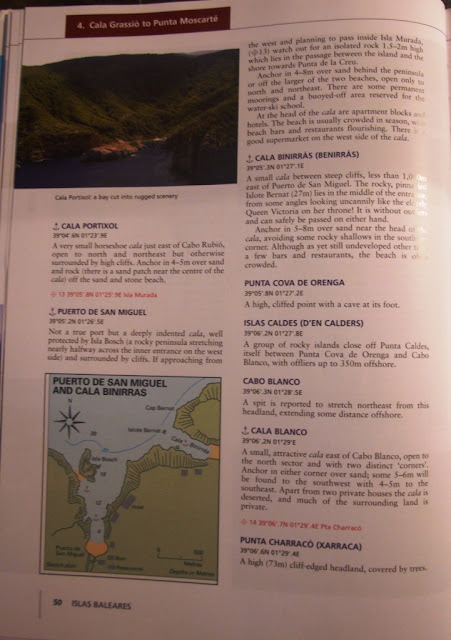 In our case we found the Imray guide by Graham Hunt of the ‘Islas Balearas’ absolutely invaluable. Consulting it to find our next stop we discovered the anchorage at Cala Binarras looked very well protected from the prevailing North Easterly breezes. It was a long, narrow inlet between steep cliffs open only to the west which was guarded by a high rock pinnacle rising out of the middle of the entrance. There was little development other than a few restaurents behind the beach at the end of the inlet. Yep that sounds good. Lets put it in the chart plotter and see how far we have to go.


OK so at just five nautical miles down the coast our passage that morning was not going to rival any Atlantic Crossing but why sail past somewhere nice just to clock up miles. There was almost zero knots of wind and what little there was blew from directly astern so we never even unzipped the sail bag. We need to run the engine a couple of hours a day to charge out batteries anyway so at least we were moving while our 75 horse Yanmar did its thing. 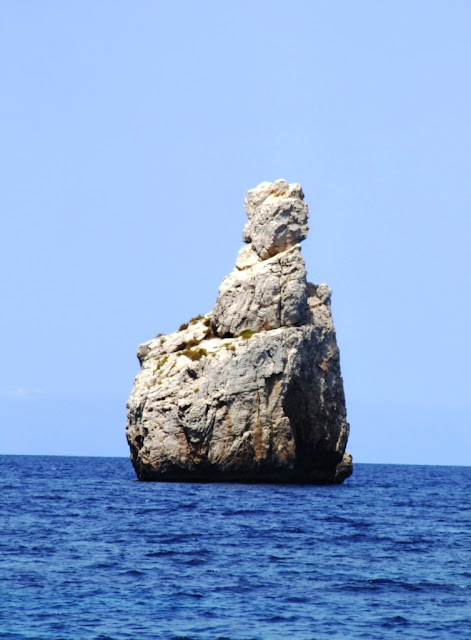 Almost as soon as we left Cala Portinatx we found ourselves rounding the high rock walls of Cape Bernat and spotted the impressive Islote Bernat rising out of the water in the middle of the bay. From some angles it actually resembles a statue of the elderly Queen Victoria on her throne. We motored past into the inlet flanked by high cliffs and found only a handful of yachts already moored. We’d just started to mosey around to pick a suitable spot to drop our anchor when the boat nearest the beach started pulling theirs up to leave. Perfect timing. It’s like being in the right place at the right time to score that parking spot right by the shopping centre door on a Saturday morning. As he left we slid into place and dropped us. Lovely 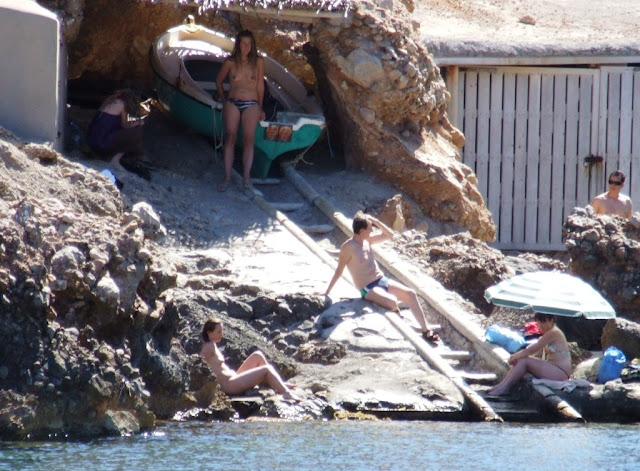 The place was certainly popular with day visitors packing the full length of the beach while the rocks lining the sides of the bay appeared the favourite perch for those working on their all over tans. . Marc and Rob were again kept visually entertained by the number of naked young ladies on the rocks but although she wasn’t not saying too much, Karen also seemed to appreciate some of the buff young Spaniards on display. We could see a string of beach front café/bars but there were no resorts visible from the water at all. It was very nice to be away from apartment blocks for a change.


It wasn’t long before we were in the water snorkelling across the bay to explore some sea caves we’d spotted on the far side. There appeared to be two deep caves side by side. Swimming into the right hand cave we were surprised at how much the water temperature dropped once out of the sunlight and by the total change in the colour of the marine growth. Outside in the bay all the seaweeds etc were fairly bland shades of brown but soon as we entered the cave we were surrounded by a world of bright pinks. We were able to swim about fifteen metres right to the back of the cave where we discovered it linked to its partner. Diving down we found that we were in fact in a single cave but the central roof reached down to about a metre beneath the surface creating the illusion of twin caves. We could snorkel under the dividing overhang from side to side. It really was great fun and not like anything we’d experienced in Australia. We really do need to get a waterproof camera.


By the time we returned to the boat we were surprised to find we’d been snorkelling for over two hours. After such a good workout we’d also developed a pretty good appetite. Marc joined us for a trip ashore to check out the cafes where we enjoyed some local Spanish fare and large jug of refreshing  Sangria.


Back onboard that evening mother nature turned on another outstanding light show as the sun dipped over the horizon in a blazing display of reds, oranges, yellows and pinks. The sunsets just seem to get better all the time. 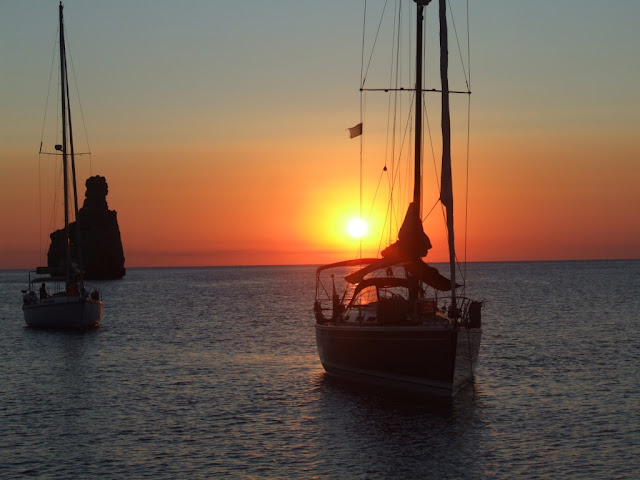 Friday July 20th was a very special day for us as we celebrated our 27th wedding anniversary with a morning swim then snorkelling along the base of the cliffs before cracking a bottle of Cava (Spanish Champagne) with lunch aboard. 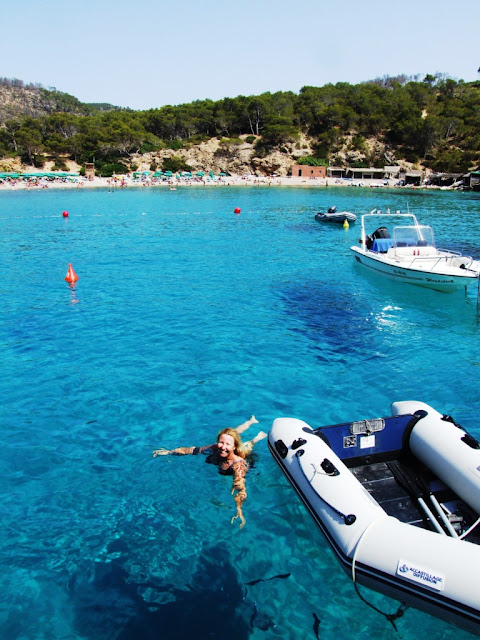 We then capped it all off with more of the same at the best restaurant ashore accompanied by a massive seafood paella. As we struggled to do justice to the huge pan of delicious food, we noticed that the beach had again filled from end to end with people, apparently assembled to watch the sunset. In the centre of the beach a bonfire was lit surrounded by a dreadlocked troops of bongo drum playing, fire eating, belly dancing ferals.


Once again the sky turned all hues of colour as the sun descended. As it approached the horizon  the hub bub of conversation on the beach became subdued. Even the bongo drums were rested and by the time its rim appeared to touch the sea the beach was virtually silent. Finally the last remnant of the burning globe dropped below the horizon and in unison the whole place broke out in enthusiastic applause. How weird. We just looked at each other in amazement. People, the sun went down. It was nice but it's been doing it for millions of years you know. Get a grip. The clapping was so loud and prolonged we almost expected old Sol to reappear for a curtain call. Then the bongo drums started again which appeared to be the signal for all the non-ferals to go home.

It’s one anniversary we definitely won’t forget in a hurry.


We love to receive comments on our blog from readers. If you do leave a comment and you also have a blog, please leave a link as well. We'd like to click over for a visit and leave you a comment too.
To stay right up to date with what we’re up to  and see lots more photos check out and 'like' our Dreamtime Sail Facebook page at DreamtimeSail