With Alcheringa fully provisioned with fuel, food, water and, of course, wine, we finally left the La Lonja Marina at Palma on the morning of Friday July 13 and headed out into Palma bay for the first time with just the three of us on board our boat. There was no containing the smiles all around as we all savoured the moment.

Now many superstitious people will say you should never start a voyage on a Friday and for some the very  thought of Friday the 13th would of have them staying firmly tied to the dock. We however were very keen to get away from the marina before all the charter boats started arriving back in from about lunchtime. It may have been nice and quiet during the week but Friday and Saturdays are absolute bedlam.


We decided we wouldn’t technically be starting a voyage on a Friday if all we did was move a short 14 nautical miles west along the coast to a little bay called Cala Portals or Porto Vels. For some reason nearly every anchorage on Mallorca listed in the cruising guide has two names. We’ve have no idea why. There’s even more than one way to spell the island itself with official paper work we saw going with Mallorca while many signs and books etc had it as Majorca. Either way it’s pronounced May-Yorker so go figure.


We did experience one small hiccup as we were making our way through the harbour and about to leave port when Rob turned on our chart plotter to enter the our short route into the system. It was a Raymarine brand which we were familiar with using on previous boats we'd crewed on so we hadn't paid it much attention until this point when we suddenly discovered its language was naturally set on Spanish. AGH!! As Rob's Spanish language skills don't stretch far beyond 'Dos vinos tintos por favor' (Two red wines please), there was a mad scramble to dig out the operating manual and find out where in the menu we could change the language settings to English.


Conditions were perfect for our first time out with the breeze light but more than enough for us to sail along nicely downwind towards our first anchorage. We all took turns on the helm and revelled at simply being on the water in our own boat. Sailing peacefully past bays packed with big resorts and all the hurly burly that goes with them was a fantastic way to unwind after the past month’s dramas buying the boat.


We furled away the genoa and dropped the mainsail just outside the high cliff headlands that protect Cala Portals and motored in towards what was a fairly busy anchorage for a Friday. We were able to find a secure spot to drop the anchor in four metres of water with a nice sand bottom. We were a little close to a couple of small powerboats but we correctly assumed they would disappear by sunset leaving us with plenty of room to swing around during the night.


Cala Portals is a small but very beautiful bay with nice clear water surrounded by high rock cliffs on all sides. Inside the headlands it splits into three fingers with great beaches at the end of each. A very small boat harbour was tucked into the Eastern side of the bay. It was backed by some apartments stretching up the hill and a row of luxury houses along the cliff top. The rest of the bay however featured no development other than small cafes behind each of the three beaches. It really was as nice a first anchorage as we could of possibly hoped for. 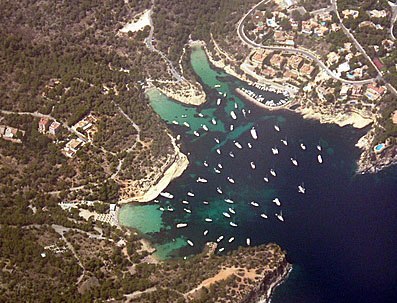 One thing we noticed very quickly was that either Spain’s economic woes were worse than we thought and the majority of people can no longer afford bathing suits or sunlovers in the Med simply don’t bother with them. We learned that apparently the centre beach is a designated nudist beach but, to be honest, all of Cala Portals seemed to be very clothes optional. Karen was particularly bemused by the number of males that had proudly embraced the Brazilian trend while just the thought of back, sack and crack waxing had Rob and Marc wincing. While the boys clearly enjoyed some of the young female eye candy on offer, the old saying that some nudists are the last people on earth you really want to see nude also certainly came to mind. 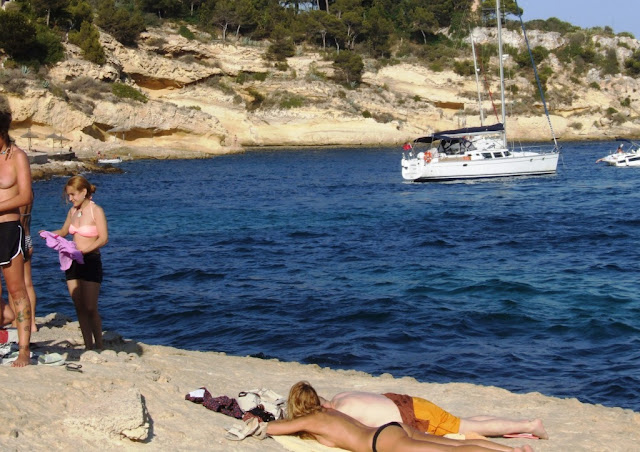 In July summer in the Balearic Islands is unquestionably superb with mostly clear, warm days and magnificent sunsets that light up the sky in an ever changing array of colour stretching into prolonged hours of twilight. With all but a few yachts and larger motorboats disappearing well before nightfall we were left to enjoy a magnificent, very peaceful evening with one of Karen’s great meals and a glass of wine or two. The very best of cruising life and really what we’d all been hanging out for.


The following day being Saturday we found out just how popular Cala Portals is with pleasure boats  and hundreds of beach goers that descend down the cliff paths. By early afternoon new arrivals through the heads often found nowhere to anchor and simply turned around and went. The beaches and rocky ledges were covered in tanning bodies literally of all shapes and sizes while out on the water there was a vibrant atmosphere as hundreds more enjoyed themselves on the vast array of vessels from small speedboats to multi-million dollar super yachts. 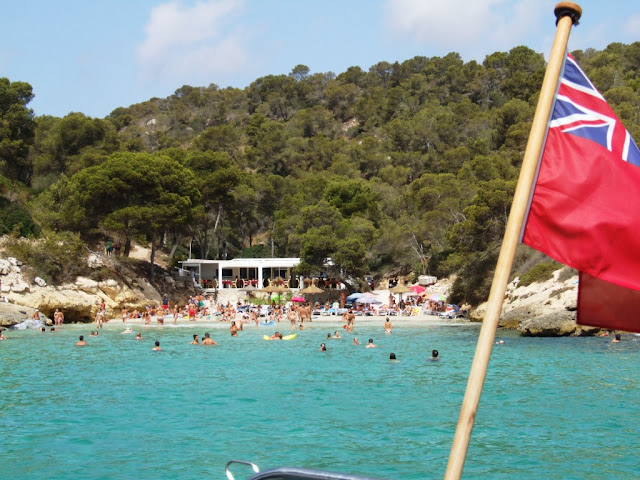 After plenty of snorkelling in the crystal clear water, Karen and Rob went ashore for a while exploring some of the tracks and headlands and took the obligatory photos of Alcheringa resting peacefully in our first anchorage.  Meanwhile Marc was content to sit back onboard, relaxing and taking in the atmosphere. 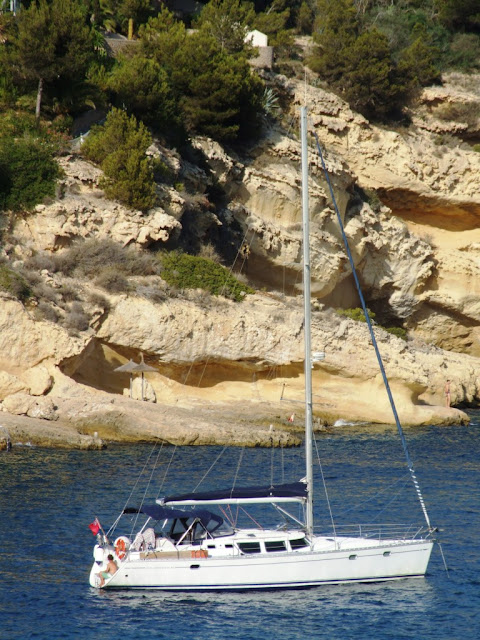 The bay pretty much emptied out again that evening and later during the night a small swell made its way around the headlands making things a little bit rolly onboard. However, we found the new rear cabin  layout with its super-wide bunk perfectly suited to laying across the bed to minimise the effects of the roll and we were still able to enjoy a good sleep - with one interruption. Stirred from a deep slumber by a short period of more energetic rolling we heard a new noise on the boat coming from beyond our cabin and in our semi-somnolent state tried to place what it may be. Just as we both bolted upright having had the simultaneous realisation that what we were hearing was the sound of wine glasses sliding back and forth across the galley bench top and before we could actually get off the bunk, a larger swell hit the boat beam on. We rolled more savagely and all three glasses slid clean off the bench top and smashed into thousands of pieces on the deck with an almighty crash.


We spent the next half hour trying to sweep up every shard of glass that had spread the entire length of the salon. Next morning we resumed the hunt in the daylight and were warily crawling around the floor with dustpan and brushes as Marc emerged from his cabin with a bemused 'What are you chaps doing?' He had not heard a single sound during the night.


The episode provided us with a stark reminder that just because things are calm when you are heading to bed doesn't mean they'll stay that way so everything has to be secured away every night. It also resulted in us now drinking our wine from unbreakable plastic versions of our original glasses.


Sunday morning was spent doing much the same as the previous day but in the afternoon we did take the opportunity to go ashore again. This time we explored caves cut into the western headland during the Phoenician occupation of the island around 300BC.  They were ancient tombs that are huge and stretched well back into the solid rock. They contained some very elaborate rock carvings that we were surprised to find were not protected in any way from possible attack from vandals. Some of the cave roof has collapsed around one of the entrances during an earthquake but overall the whole system is in very good condition. We were amazed again at what ancient people had been able to achieve without any form of mechanisation at all. We really are soft these days.


Our other activity on Sunday was planning our first passage because the following morning we were going to really head to sea for the first time on Alcheringa and sail across to the western most of the Balearic Islands, Ibiza.