Even though we only planned on a relatively short hop to Hexham Island, we set sail before the sun appeared over the tree-line of the hills overlooking West Bay at Middle Percy Island. Our early start was an insurance policy in case we found the small bay at Hexham invaded by swell and unsuitable in the conditions. We have stayed there before and absolutely love the place. See Another uninhabited tropical paradise all to ourselves – Hexham Island .

The forecast we had on hand indicated the wind should be a modest easterly in the morning before easing further and swinging more south-east for the evening. If the wind stayed from the east with any strength the anchorage on the northern side of island could be very rolly. If we found this to be the case when we got there, we would have time to continue on to one of the more protected anchorages along the coast of the Shoalwater Bay military exercise area.


Not long after passing by the western end of South Percy Island we hooked a nice spotty mackerel. It was the first fish hauled on board since our eight year old grandson, Kristian, had joined us in Mackay for the trip down to Brisbane and to say he was excited by our catch would be a slight understatement.


We then settled in for a fairly casual sail the rest of the way. As we approached Hexham Island we were planning our afternoon’s activities including some snorkelling to hopefully find a crayfish or two, a bit of oyster gathering along the rocks and then some nice relaxing sundowners on the beach. That was until the radio crackled into life with a weather forecast from Thirsty Sound Volunteer Coast Guard which stated ‘Winds 10 to 15 knots from the east strengthening to 15 to 20 knots and turning north easterly late in the day’. Any idea of spending the night at one of our favourite spots along the Queensland coast disappeared immediately.


We quickly adjusted course, sailing through the channel between Hexham and Shields Island and headed further south. Our original Plan B anchorage was Pearl Bay but it would most likely also be untenable in a reasonably strong north easterly. This left us a choice of Island Head Creek, Port Clinton or sailing on through the night to Great Keppel Island. We radioed our friends, Matt and Debbie, on La Jorja who were a couple of hours behind us and found out they were going to take the night sail option and keep going.


After calculating that a similar plan would see us arrive at Great Keppel sometime after midnight in the very dark hours, we scratched that option off the list.  We stayed a night in Island Head Creek the previous year, but with its very shallow entrance and long haul up stream to find protection in northerlies it’s far from our favourite anchorage. See  Who to believe when the charts and pilot guides don’t agree – Island Head Creek .


It would be close to the end of a run out tide when we reached its mouth and, with a strong onshore wind blowing against the outward flow, we suspected the waves might stand up steeply around the sand bars at the entrance. We would only go in if it all looked good. If it was lumpy we would continue on further south to Port Clinton in what would unfortunately be a very long day for our young crew member.


As predicted, the wind and swell increased and swung a little north of east over the next few hours. as predicted. Despite the wind being forward of the beam, we were getting along nicely at up to 8.5 knots under staysail and a reef in the mainsail to smooth the ride out as much as possible in the building conditions.  We were assisted by a nice boost from the current generated by the outgoing tide around Cape Townsend.


A Beneteau of mid forties length had been pacing us most of the day sailing a couple of miles further seaward. By the time we were nearing Island Head they closed the coast and were soon sailing in our wake. They hailed us on the radio seeking information about the entrance to the creek. Despite our reasonably shallow 1.5 metre draft, we came very close to touching bottom there in calm conditions in 2015. With the swells now around a metre and a half and the wind gusting to twenties we had already decided to keep going to Port Clinton. We had no intention of trying our luck with waves breaking over the shallow bar. When the Benny said they drew over two metres of water we suggested they also give it a miss.


So on towards Port Clinton we bounced. As we approached the entry to Pearl Bay, our suspicions about conditions in there were confirmed when a catamaran that had left Middle Percy a couple of hours ahead of us sailed out of the anchorage having found it untenable. They also headed for Port Clinton.


We had been keeping an eye on the sky to the south which had begun to look increasingly menacing. Dark storm clouds gathering on the horizon is never a welcome sight. We began debating which way we thought they were heading and how much risk they presented us. We were now motor-sailing to pick up the pace as we were eager to get in and anchored up as soon as possible. After having no phone service since Mackay, fortuitously our mobile pinged with an incoming SMS message when we were about half an hour from the entrance to Port Clinton,. We had service. Rob very quickly tried to access the Bureau of Meteorology website but discovered the signal wasn’t strong enough. He then managed to phone a sailing friend in Brisbane and asked him to check the site for us. There he found a severe thunder storm warning had been issued for the area with the weather radar showing a line of intense storms heading our way from the inland ranges.


The engine revs came up from 1,500 to 2,000 rpm and we began battening down in preparation as we ran for harbour. We also radioed the guys on the Beneteau to let them know what we’d found out and they too started their engine to speed things up. Soon after, Matt from La Jorja came on to let us know they had heard our warning and were abandoning their night passage plans and also altering course to shelter in Port Clinton.


We made our way over the bar at the entrance to Port Clinton where we saw as little as three metres of water showing on the depth gauge before furling away the sails and motoring down the south arm to anchor up in six metres. By now the phone service had improved and we were able to view the weather radar ourselves. It appeared the line of storms was going to slide through slightly to our south but it was going to be a close run thing. We made sure the anchor was well set with more than ample chain out just in case.


As it turned out, the thunder storms did just miss Port Clinton but gave locations south of us a good belting. However, by the time La Jorja anchored up behind us, rain was falling which got heavier and persisted through much of the night. If Matt and Debbie had continued on into the night they would have sailed right into the path of the storms. Not fun!


The forecast showed the next day would see similar 15-20 knot easterlies followed by 20-30 knots east and south easterlies for a number of days. As much as the conditions didn’t appeal, we decided we’d rather bounce our way down to Great Keppel Island and hole up there than be stuck in uninspiring Port Clinton. We love GKI and there Kristian would be able to swim, snorkel and go ashore unlike here where the presence of crocodiles precludes those sort of activities.

So what can we say about the next day’s 48 nautical mile passage to Great Keppel Island? Well, it was bouncy, uncomfortable, boring and generally unpleasant but Our Dreamtime and her crew, including its youngest member, weathered it all fine. It’s just the price we sometimes have to pay to reach a fantastic playground like GKI. Such is life. Now bring on the fun. 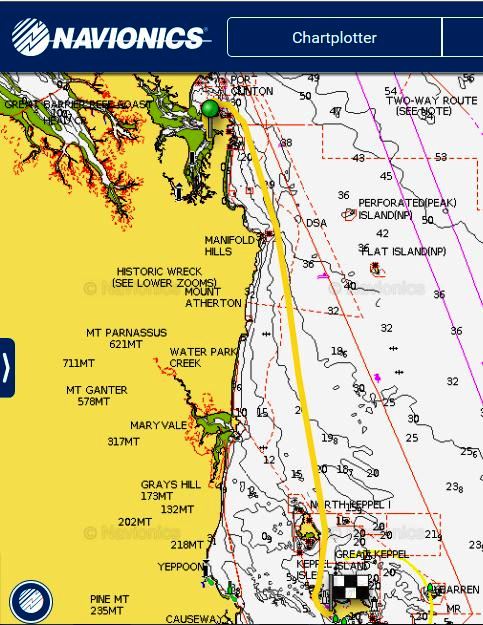 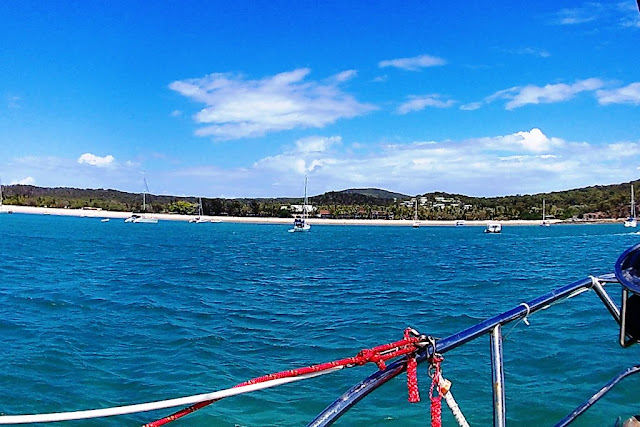