With strongish winds blowing predominantly from the east-south-east were comfortably anchored off Fisherman’s Beach on Great Keppel Island’s western end and quite happy to stay for as long as the weather dictated. With our eight year old grandson, Kristian, on board we couldn’t ask for a better place to shelter for a few days. We simply love GKI. This was our fourth visit on Our Dreamtime and on each occasion we have had an amazing time.
There was certainly no problem finding things to do to keep our youngest crewmember occupied. We started by continuing his introduction to the world underwater. He’d had his introduction to snorkelling at Middle Percy Island and as this was to be only his third foray with mask, snorkel and fins we commenced with a easy session along the rocks and coral bordering Fisherman Beach’s southern point. Our caution was probably not needed as he was very quickly chasing fish across the bottom and exploring any crevice that looked like it may conceal marine life. His weekly swimming lessons since infancy his mother has spent so much time taking him to have certainly paid off.


After an hour and a half in the water Master Kristian may not have wanted a break but the poor old Skipper and Admiral did. A suggestion of ice-cream from the small store behind the beach rapidly convinced him a leisurely  stroll along the glorious sand was a good idea.

After lunch we very content with a quiet afternoon on board with Rob downloading and sorting his underwater photos and Karen able to manage a bit of reading while Kristian wrote his journal then watched a movie. Yep! Even on a boat the TV can be a good child care tool.  Later on, Matt and Debbie from La Jorja joined us on Our Dreamtime for another very enjoyable sundowners session. Being a big fan of the crackers, cheeses and other snacks Karen serves up, Master Kristian has quickly taken to this cruising tradition and is usually an active participant in the conversation.
We enjoyed an awesome breakfast of mackerel in panko and eggs for breakfast on the stern next morning but, having discovered the wonders to be found below the sea’s surface, the plates were barely cleared away before not surprisingly, the ‘Can we go snorkelling now,’ question was asked by the small man.
We did manage to enforce a short wait to let our food settle before piling into the dinghy. This time we ventured a little further afield round into Shelving Beach in the next bay. After spending an hour snorkelling the northern side of the bay, Karen elected to relax under a tree with her book leaving Rob and Kristian to explore the reef off the southern point. 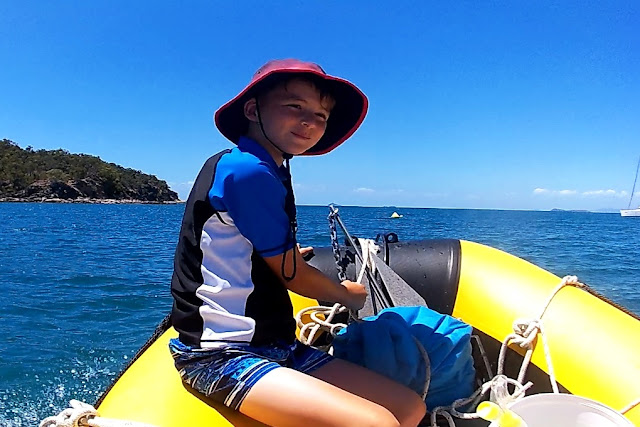 We found far more good coral here than on our previous morning’s dive but the real highlight was the marine life. Fish were both plentiful and very colourful while they were a good number of juvenile leopard sharks scattered on the bottom amongst the coral. We spotted plenty of stingrays in the sand beside the reef including a couple of very large examples well over two metres long. 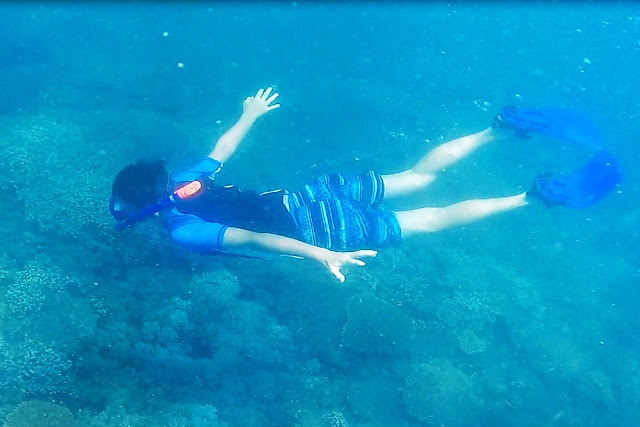 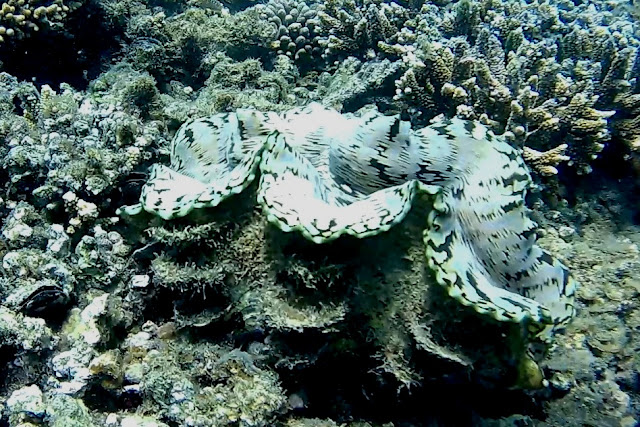 The biggest thrill though was watching Kristian swim with turtles for the first time. The turtles we discovered seemed totally unconcerned by our presence as they glided slowly through the clear water despite Kristian getting a little closer than we would normally like a couple of times as his excitement got the better of him. Even after almost two hours in the water, his enthusiasm didn’t waiver and so it was finally a tiring Rob who called time on the session. 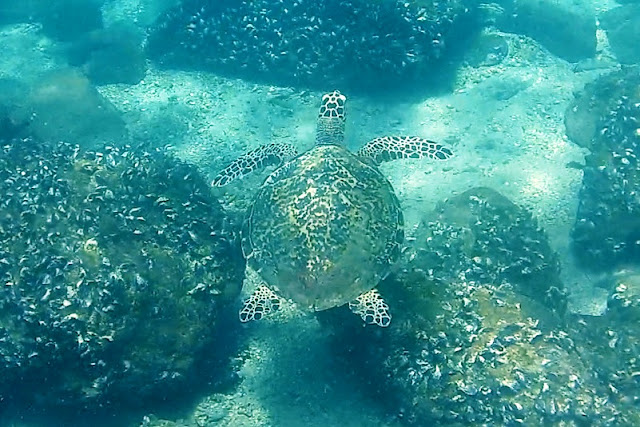 After such an active morning, our afternoon was virtually a repeat of the previous day although instead of a movie, Kristian occupied himself with a fishing rod. 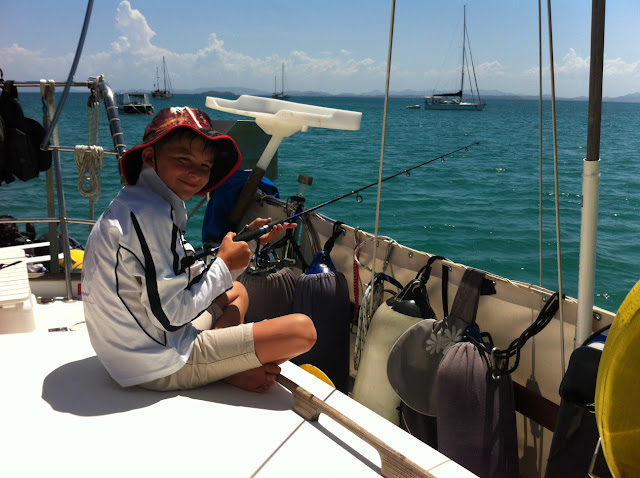 Day three at Great Keppel Island again dawned bright and clear but the winds had eased considerably  making conditions on the water even more pleasant. The Skipper and Master Kristian boarded our kayak for some exploration around the spit along Putney Beach. Admiral Nanny arranged to follow in the dinghy later and rendezvous for a swim on the beach at the Hideaway Resort. 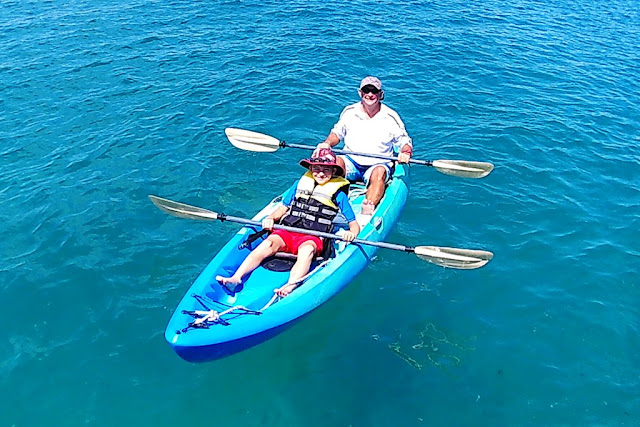 Soon after meeting up as planned, Kristian was fortunate enough to experience a stand up paddle board for the first time. A lovely woman was running the hire equipment there and her two young boys were both paddling around having a ball. When she spotted K-man looking on enviously she generously invited him to have a go. We had the camera ready to catch the funny, falling off footage but should have known better. After one slight wobble, the sporty little bugger was soon buzzing around all over the place as if he’d been boarding for years. 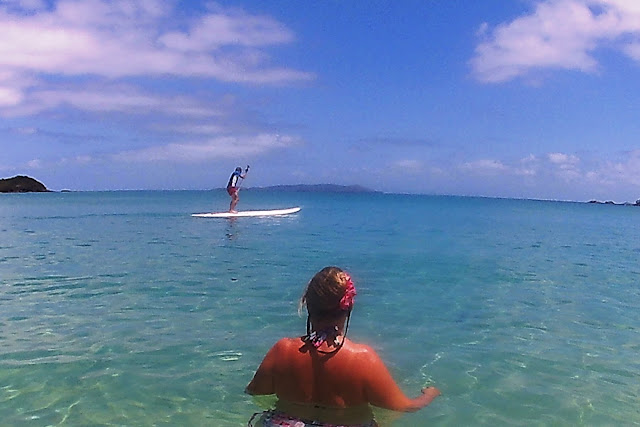 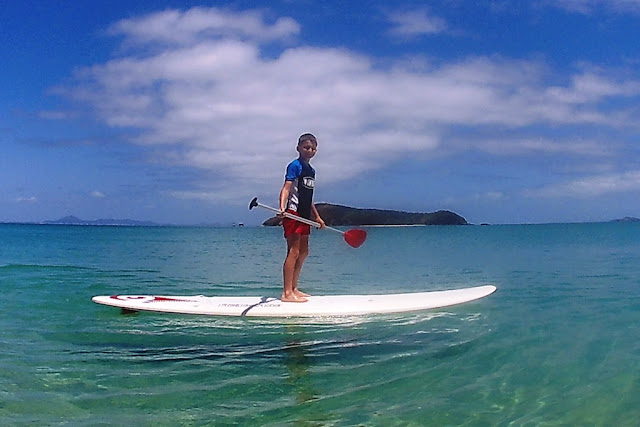 The it was time for a quick trip back to the boat where we secured the kayak and re-loaded the snorkelling gear for a trip around to check out the reef off Monkey Beach on the island’s south western corner.
This was by far the best snorkelling we experienced at GKI. The coral was excellent with an abundance of colourful clams interspersed. Being a ‘Green’ conservation zone, no fishing of any sort is permitted. The fish are clearly aware of this protection as the entire area was thick with much larger examples than we had seen in the other bays. They were also far less bashful and we found we could swim up very close to them without a problem. 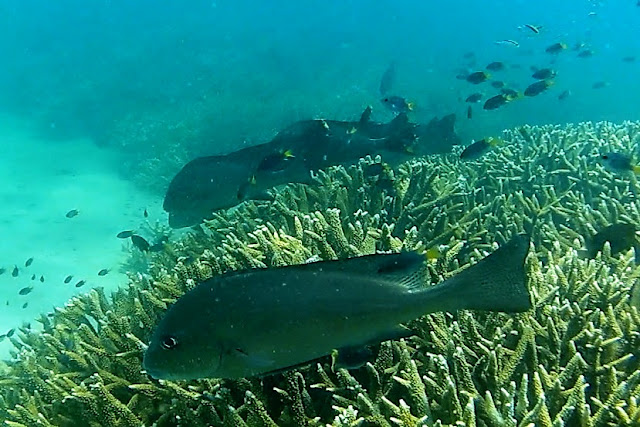 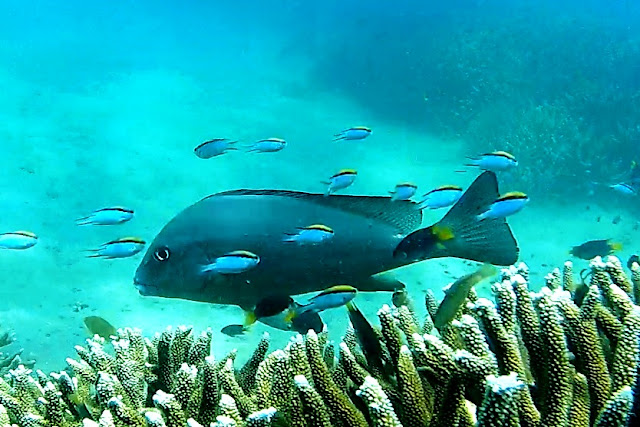 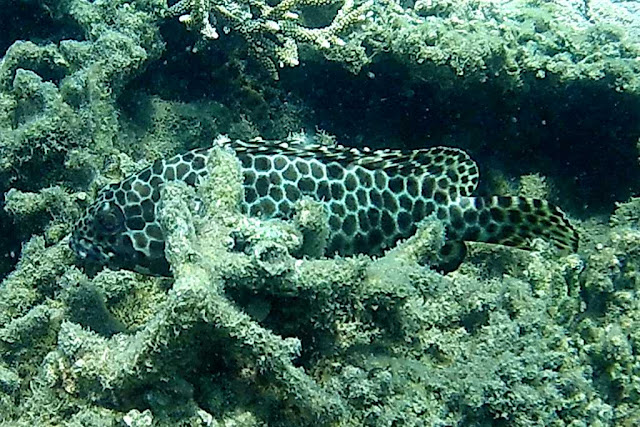 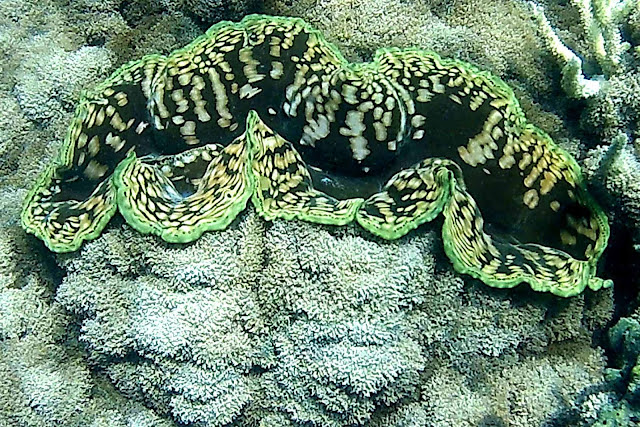 Again we were able to swim with turtles that let us get nice and close again for some more great photos and video.  However, Kristian did inadvertently wake up one turtle that was snoozing on the bottom which proved less inclined to hang around for a selfie. 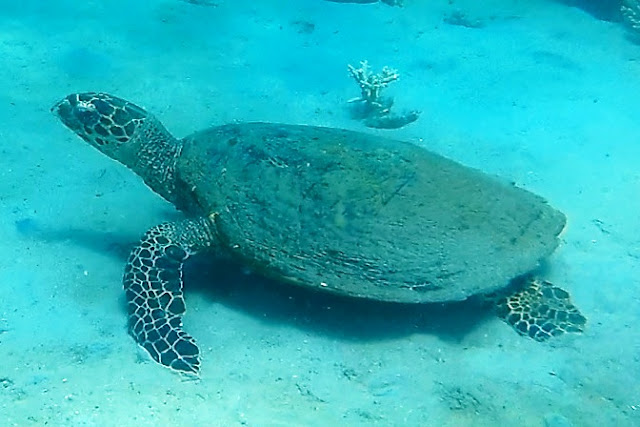 A real highlight was finding about a metre long Wobbegong Shark settled on the bottom amongst the coral. It wasn’t until we dived down to have a closer look that we realised it was laying nose to nose with a large crayfish that was hiding under some coral. As it was a green zone, we unfortunately couldn’t grab the cray to mornay later but it did make for some cool photos. 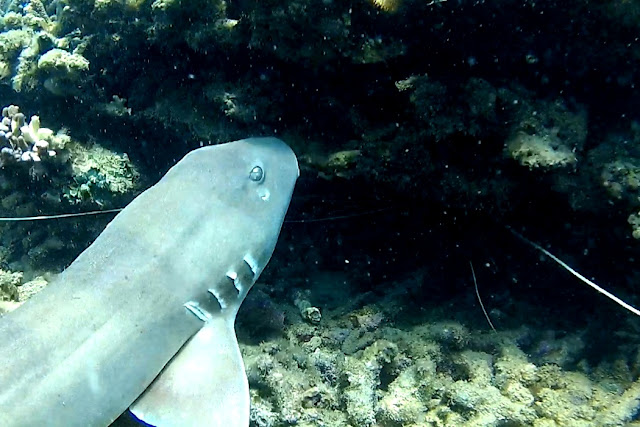 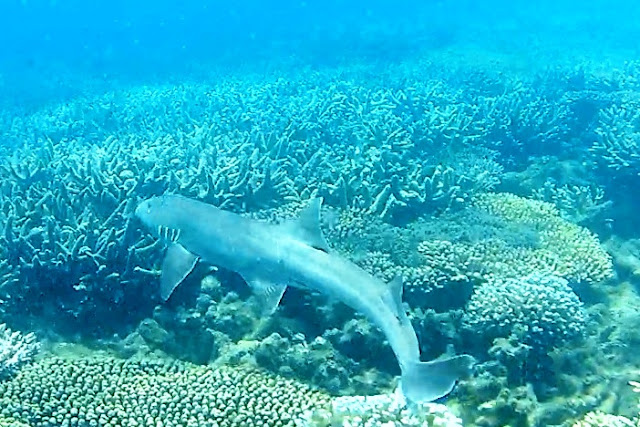 The water was nice and warm with excellent clarity and a couple of hours flew by while the three of us were immersed in exploring the reef. It was yet another experience to cement Great Keppel Island as one of our favourite spots on the Great Barrier Reef. The wind could have blown for a week and we wouldn’t have minded staying put one little bit. However, the forecast showed we were in for some very calm weather which would be a perfect opportunity to reef hop south rather than sticking to the coast. This was a chance not to be missed so our time at GKI was near an end – this time.
Back on the boat, Karen whipped up a cheesecake to take over to La Jorja for afternoon coffee. They too were going to make for the reefs so we had jointly decided on an early night ahead of the next day’s sailing.
Aren’t good intentions wonderful? Talk over coffee and cake of our plans for the next few days stretched to a full blown conversation about the coming seasons and before we knew it we were toasting  our long term sailing plans with beers and cider. Oh look that’s a lovely sunset we should open a bottle of wine.


We love to receive comments on our blog from readers. If you do leave a comment and you also have a blog, please leave a link as well. We'd like to click over for a visit and leave you a comment too.
If you like our photos and would like to see more follow us on Instagram
To stay right up to date with what we’re up to and see lots more photos check out and 'like' our Dreamtime Sail Facebook page at DreamtimeSail