After a week on the dock in the Mackay Marina we were finally able to cast off the lines in the pre-dawn light to continue our Great Barrier Reef meanderings. The strong south easterlies were now gone, replaced by gentle breezes from the north east that saw us motor-sailing over calm waters.
We were off to the cruisers’ Mecca of Middle Percy Island with its beautiful palm lined beaches, crystal clear water and iconic A-Frame gathering place for sailors from all over the world.
Obviously we would have preferred to have enough enough wind to be sailing but the smooth conditions were perfect for our new crew member, young Master Kristian, to settle in and get his sea legs. Our 8 year old grandson was to be on board Our Dreamtime for the next month or so as we made our way down the Queensland coast to Brisbane.


After the extended run of adverse winds we were part of a small flotilla that exited the marina headed for ports south. We made our way through the mooring field off Hay Point where bulk carriers weight at anchor for their turn on the long jetty to take on coal for export all over the world. Sailing close by these monsters was an all new experience for Kristian. He was very impressed at just how big they are.
We passed by Prudhoe Island and ran along the eastern side of the Beverly Group before the final run across to West Bay at Middle Percy Island. Fortunately the wind did pick up on this leg and we were able to enjoy a bit of a sail.

Mackay Marina to Middle Percy Island – 58.9 Nautical Miles – 9 Hours 37 Minutes  - Average Speed 6.2 Knots – Max Speed 7.6 Knots.
The near sixty mile trip took over nine and a half hours so it was a bit of a trial for an eight year old. We worked at keeping him busy so fortunately we didn’t get asked ‘Are we there yet? , When are we going to be there?’ too often. Once we anchored up we got the dinghy down off the davits fairly smartly and headed straight into the beach where young Master Kristian was able to tear around the sand and burn up a good supply of pent up energy.


He was particularly impressed with the A-Frame literally packed to the rafters with memorabilia left behind by the crews of thousands of cruising boats to mark their visit to this bay so high on most sailors ‘must do’ list. To Kristian it was a huge cubby house full of ‘really cool stuff’. He had a ball exploring every nook and cranny before inviting himself to assist one of the visitors who was building a fire in the pit in preparation for barbecuing their dinner.  Suffice to say there was no shortage of wood added to ensure the fire built would have been capable of cooking an ox. Following our foray onto the beach, we all turned in for an early night after dinner on board ready for a full day of activity on the morrow.
For more on the history of Middle Percy and how it evolved into a haven for crusiers see our previous blog from our first visit here last year.  Eating wild goat stew on Middle Percy Island.

Number one on the next day’s agenda was Kristian’s first snorkelling lesson. One of the other cruisers we met at the A-Frame suggested we take him into the small inner harbour to begin his underwater adventures. The harbour is accessed by a narrow passage in the rocks but only at high tide. The entire inlet dries completely on the low.  Earlier in the season friends with a multi-hull had sheltered inside with five other catamarans from some strong westerly winds for a couple of days and spoke about the surreal experience of walking to each others’ boats for sundowners.
For our purposes the small inlet provided totally calm, clear water to teach Kristian how to use a mask, snorkel and fins. Having had weekly swimming lessons since he was a few months old, we were confident he’d pick it up quickly and weren’t disappointed. One mouthful of salt water ingested was enough for him to get the hang of the snorkel then there was no holding him back. He was instantly enamoured with the world underwater pointing to every fish that swam by and enjoying the unique experience of snorkelling around the mangrove roots before we did a fast drift with the outgoing tide through the narrow passage and out into the bay.

Our friends Matt and Debbie on the boat La Jorja arrived during the morning and it was great to have a meet up on the beach. We hadn’t seen them since Michaelmas Cay off Cairns so we had plenty of catching up to do.  As always, the weather forecasts and what they meant for our trip south were a major subject of discussion. We were not getting any mobile phone/internet service in the bay but Rob had heard you could get reception on the top of the headland. We did have access to the Predictwind Offshore forecast via or Iridium Go but we do like to have more than one forecast model to look at where possible. so he decided to go for a trek to see what he could pick up. 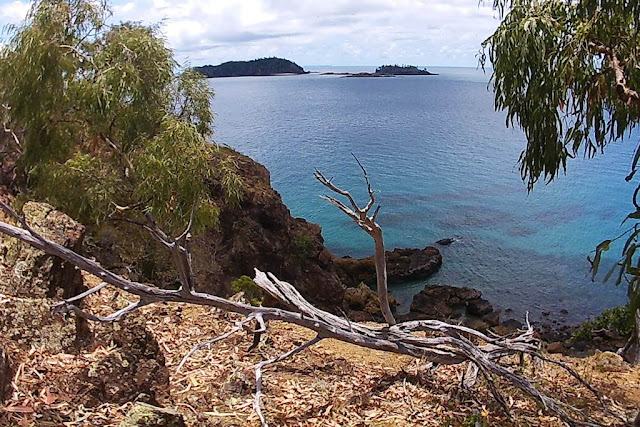 The climb through the bush was simple enough and he was able to take some nice photos courtesy of the elevation but as far as internet was concerned it had to be classified as a fail. It was possible to get a sniff of phone service showing on screen but it continually dropped out before any weather site could be accessed despite even climbing a tree to gain a little extra elevation. Such is life.
Keeping  Kristian out of the water for a reasonable space of time after lunch was a real effort. Having discovered a whole new world under the water, his excitement levels were off the Richter scale. A large slice of the afternoon were spent snorkelling along the northern edge of the bay where we discovered good numbers of colourful fish of all sizes. It was also Kristian’s introduction to some of the huge range of hard and soft corals that make up the Great Barrier Reef. He also got the hang of the concept of free diving within no time and was soon reaching three and four metres down.

Later we enjoyed sundowners onboard Matt and Debbie’s boat. Their 50 foot catamaran’s expansive salon made an instant impression on Kristian. With the direct honesty only found in children, his response when Karen asked if he liked La Jorja his instant response was, ‘Yeah! It’s better than your boat’.


West Bay at Middle Percy Island well deserves its reputation as a MUST for cruisers sailing the Queensland Coast. We’d had two very enjoyable days here again. While we’d hoped to take the walk up to the homestead the following day, the weather forecast dictated that our stay at the Island would be short one this time as things looked good to make our way south to Great Keppel Island via relatively short hops to Hexham Island and then Pearl Bay over the following three days. Hexham Island became a real favourite of ours when we spent a couple of nights there last year – see Another Tropical Island Paradise all to ourselves  – and we were keen to revisit.