After a couple of fantastic days in Sea Eagle Bay on Thomas Island we raised the anchor at the extremely civilised hour of 9.15 AM and set sail for our next stop at Stingray Bay on Goldsmith Island. It was only a short, ten mile hop so, with a modest northerly pushing us along downwind, we elected to run with just a poled out genoa and didn’t bother to raise the main or mizzen.  We got along very comfortably at a relaxed four knots until we reached the passage between Goldsmith and Linne Islands. Here the adverse outgoing current met the northerly wind generating a short, sharp chop that combined with the tidal flow to bring us almost to a dead stop. We soon gave up on wind power alone and started the engine to push on through the overfalls that were developing. 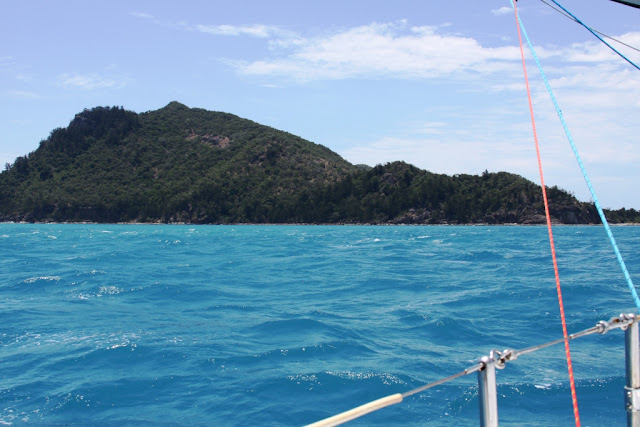 Once out the other side the water was beautifully smooth as we turned into Stingray Bay. We anchored  far into the bay as close as we felt comfortable to the fringing reef in about five metres of water over good holding sand. There was only one other boat in the anchorage when we arrived and it was on the far side of the bay. With miles of swing room around us, we laid out forty five metres of chain to allow for the rising tide and just to be safe in case an unexpected south easterly should blow up which would see us on a lee shore with coral not far behind our keel. We then had a nice lunch on board and a relaxing afternoon taking in our surroundings.


Next morning Karen spoiled us with pancakes topped with fresh fruit for breakfast. What an awesome way to start  another fantastic tropical day in paradise.

Stingray Bay is a ‘Green’ conservation zone so no fishing is permitted at all. Fortunately that’s not the case just around the point to the west so Rob and John zoomed around there in the dinghy for Rob to have a go at spearing us some fresh fish for dinner. John had a boring time sitting in the dinghy keeping an eye on Rod as he snorkelled back and forwards along the rocky point in a fruitless search for a suitable target. Much to John’s relief, he eventually decided to give up the hunt and headed back to the dinghy where unbelievably he discovered a good sized brown coral trout lurking around a rock right underneath. Thank you Mr Fish. Dinner was now catered for.


With the provisioning sorted, the three of us then headed ashore to explore Stingray Bay. The place lived up to its name extremely well with a number of very large stingrays spotted as we made our way over the shallows. The beach is split in two at high tide by a rocky outcrop in its centre but,  lower on the tides, the sand stretches all the way across. At the eastern end of the bay, a small stream emerges from the rocky slopes behind to  empty across beach.

This area around Mackay experiences some of the biggest tidal ranges on the Queensland coast, and when the water receded as we wandered the beach, it really receded. We were left with quite a way to haul the dinghy before we could refloat her and return to the yacht. With the weight of a fifteen horsepower engine hanging off the stern we are so pleased we fitted a set of beaching wheels to the new dinghy. If not for them, we may have spent a few extra hours ashore waiting for the tide to come in. 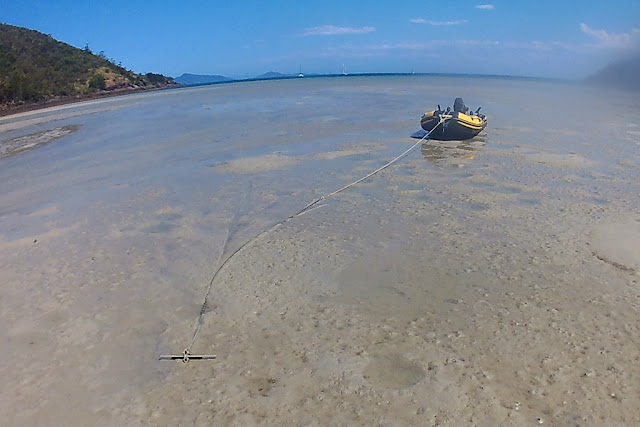 OK! Now here’s a question. Why is it that when we’re anchored in a big, wide open bay with miles of room for everyone, people have to come and anchor right on top of us? It happens time and time again. We first experienced the phenomenon in the Mediterranean where we could be the only ones in a two mile wide bay but any boat appearing around the point could be relied on to come and anchor within spitting distance of where we lay.


Rob did eventually develop a defence strategy to ease the problem. On seeing a yacht approaching, he would get the binoculars and see what flag they were flying. If it was the Union Jack or Stars and Stripes he’d wait until they were getting close and then stroll up to the bow naked, ostensibly checking our anchor. The prudish Brits and Americans would turn tail and anchor as far away as possible. Unfortunately we discovered most Europeans were immune to this defence and would be more likely to also appear on deck naked as they shouted greetings and anchored in our virtual pockets.


When we returned to Our Dreamtime here at Goldsmith Island, a catamaran had anchored not far off our stern. Considering they had the whole bay to anchor in, they were annoyingly nearby but at least not dangerously close. However, an hour later another catamaran appeared around the point, appropriately named Bad Cat as it turned out. Sure enough, it made a bee line for our particular piece of Stingray Bay and anchored very close to our bow.  Rob had no need to drop his pants this time or even say a word for as soon as he walked forward on deck the solo sailor on the cat began pulling his chain back up. He apologised and explained he had no windless and had to pull up the anchor by hand so wanted to anchor as shallow as possible.


After moving a few metres further off our starboard he re-dropped his anchor, again annoyingly near but, in the mild northerly conditions, probably OK. Not wanting to seem grumps, we let the issue lay. That was a mistake.


After sunset a pretty impressive lightning show started to develop over the mainland giving us enough cause for concern to check the weather radar. Sure enough, there was a pretty nasty storm system heading our way. It looked like it may slide through a little south of us towards Brampton Island but we took all the usual precautions anyway. The dinghy was secured up on its davits, we made sure nothing loose was left on deck and centred our booms. (When at anchor, the main is usually swung out to one side or the other to avoid shading the solar panels on our cockpit roof while the mizzen is put to starboard to improve access on the stern.) Considering how warm it was below decks, we left closing up all the portholes, hatches and cockpit enclosure until we could hear the rain approaching. 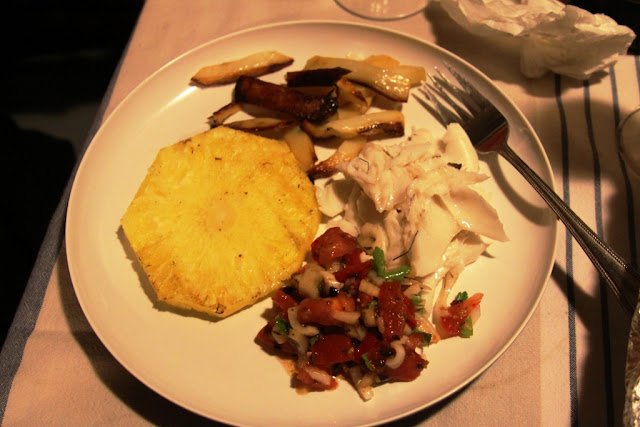 Unfortunately the storm didn’t miss us and when it hit the wind roared into the bay swinging all the boats around. Our stern was now facing the reef which was far enough away not to be a danger as we began to stretch out our chain. Unfortunately the same could not be said for the cat nearby. It was on a far shorter amount of chain and we were fast approaching a collision. It only had a masthead light showing and was also extremely hard to see in the driving rain.


We started  the engine and with John hanging half out the rear of the cockpit getting drenched while illuminating the bows of the cat with the spotlight, Rob motored forward and away each time we came close. Meanwhile Karen was unsuccessfully trying to raise the skipper of the other boat on the radio to ask him to turn some lights on so we could see him better. What he needed to do was let some more chain out so we wouldn’t reach him but with his bridle in place and no windless that would be impossible by hand even if we could have raised him.


As the wind gusted up to thirty-five knots and beyond with the rain pelting down and lightning flashing overhead with booming thunder, we spent the next half an hour or so repeatedly motoring away from the cat each time we stretched back on our chain and swung to within metres of it. When the worst had passed, we were able to call across to the skipper of the cat who was again very apologetic and quickly agreed to let out more chain as soon as the wind eased.


Fortunately once the storm was gone the gentle northerly conditions resumed and we were able to get a reasonable night’s sleep although Rob was up a few times checking on the still very nearby Bad Cat.


When we arose the following morning, our near neighbour was still apologising but Rob was quick to tell him that shit happens and not to worry about it. It’s all another deposit in the experience bank. We should have asked him to move further away originally. We will certainly do so next time. No doubt he will also be keen to provide more swing room in future as well and turn his radio on in similar circumstances. We hadn't expected a storm to blow into the bay but after a similar experience with more damaging results in the Med we should have factored in the possibility. (To read what happened to us on Alcheringa CLICK HERE.)
We’ll all be smarter for this latest experience and our guest crewmember, John, learned about yet another aspect of the cruising life.


Now it was time to move on to our next tropical island paradise.

We love to receive comments on our blog from readers. If you do leave a comment and you also have a blog, please leave a link as well. We'd like to click over for a visit and leave you a comment too.
If you like our photos and would like to see more follow us on Instagram
To stay right up to date with what we’re up to and see lots more photos check out and 'like' our Dreamtime Sail Facebook page at DreamtimeSail