Reluctantly back to Oz - Herald Cays to Fitzroy Island


We had a fairly relaxed start to our passage back to the mainland for a change and didn’t get underway from North East Herald Cay until 7.30am. We knew we were not going to be able to cover the 190 nautical mile distance quickly enough to ensure a daylight arrival the following afternoon so didn’t see much point in setting sail until both the sun and wind had got up at least a little.


We had decided to make our way to Fitzroy Island near Cairns rather than heading straight into port. This would shorten our trip by a few miles but also more importantly, Fitzroy has a nice open well protected anchorage more suitable for arriving at night. Our plan was to make our way there and have a rest before moving into Cairns to organise our engine repairs.


Leaving the atolls behind, the contrast to our rough upwind passage out from Townsville could not have been greater. Today the sea was totally calm and we were sailing wing on wing almost dead downwind with just 8 knots of easterly breeze pushing us gently along. It wasn’t fast but it was certainly very enjoyable.

The wind turned north east mid morning as predicted and we initially ran with it well to the south of our set course. A couple of hours on this tack gained us a good enough wind angle to gybe the main and mizzen sails over and replace the genoa with our asymmetric spinnaker. We then spent the rest of the day ghosting along nicely. It still wasn’t fast but it was absolutely very pleasant. It’s always good when the conditions let you do a nice BBQ lunch underway in the sunshine.

As sunset approached we doused the spinnaker and reset the genoa for the night watches. This is the tropics and squalls can appear out of the darkness at anytime so risking our favourite sail is never on the cards. We normally also reef at night but given the very light conditions we  elected to continue under full sail as progress was slow enough already. 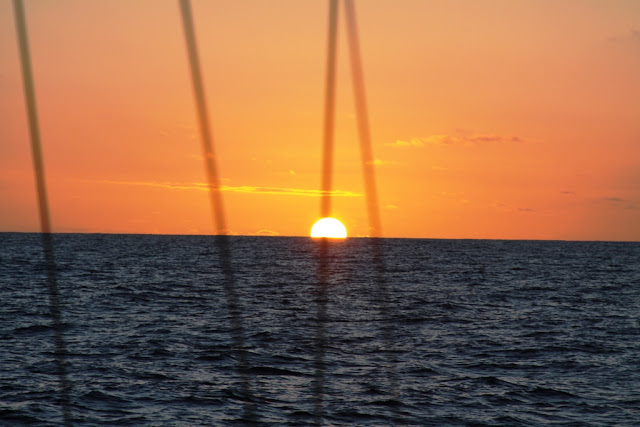 The wind slowly eased through the evening until just short of midnight on Karen’s watch when it disappeared entirely. Sitting stationary in the water with 0.0 knots showing on the wind gauge, we decided to motor slowly for a while keeping a close eye on the oil pressure all the time hoping the wind would return.


It didn’t.  The rest of the night remained dead calm and at dawn we found ourselves still chugging across the Coral Sea in its most benign form.


We did discover however that while motoring along at 1600rpm over smooth seas the engine was losing very little oil. Yes it was good news but it also threw our diagnosis of a leaking rear main seal out the window – or porthole in our case.


If it was the rear seal the engine would leak the same as soon as oil pressure was up regardless of engine rpms or sea state. We accepted what good fortune was on offer and continued to motor all through the windless day while tossing around other possible causes for our rapid oil loss on the passage to Herald Cays. We regularly stopped the motor to check the dip stick level but at our reduced revs oil loss remained very low. Another thorough inspection of things was put on the agenda for when we reached Fitzroy Island.


Karen finds a windless day of motoring extremely boring which is not all bad for the rest of the crew. To break the monotony she often gets inspired in the galley and on this occasion we were treated to some outstanding chicken and salad fococia breads  for lunch followed by fresh baked banana, raspberry, chocolate cake. 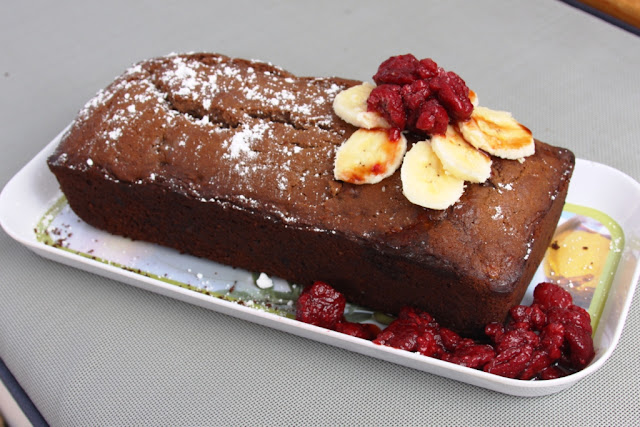 The sun had already set by the time we approached the passage through the Great Barrier Reef off Fitzroy Island and with no moon and a largely overcast sky things were about as black as they get. The wind finally did spring up though with 12 knots blowing from the north east allowing us to sail and give the motor a well earned rest for a couple of hours.


The last part of a long trip always seems to drag and it was almost midnight before we turned to wind off Fitzroy Island and furled all sail away. We were still under a moonless sky as we approached the anchorage to discover the bay awash with anchor lights. Unbeknown to us the annual Cairns Game Fishing Tournament was on based at the island’s resort and the bay was packed with game boats of all sizes and budgets.


With Rob on the bow with a spotlight and radio and Karen on the helm we began very carefully edging our way through the anchorage from the southern side looking for somewhere to drop. A number of boats were on moorings, some had rafted up together while others were totally unlit and all of them seemed to hang in different directions making our movement through extremely stressful. Rob was calling directions to Karen while Anthony was relaying her replies on the radio so she had both hands free for the helm.  After making it right through the packed bay without finding a perfect spot to anchor Rob called back to the wheel house to swing back to port into clear water and we’d circle back around and try again.


From the bow he couldn’t make out exactly what Karen’s loud response was back there but did pick up some snippets of her lengthy discourse such as ‘no bloody way’, ’idiot’, ‘thinks we’re doing that’, ‘can steer  ………. thing himself.’ Anthony’s calm interpretation of the response delivered over the radio was a dry ‘That would be a negative Rob’.


So – discussion over, we edged back around and anchored well outside all the other boats in over 15 metres of water. Fortunately we have plenty of anchor chain. We would re-anchor in the daylight when we could see what we were doing.

Once we were satisfied the boat was all secure the bar opened. Rob and Anthony cracked some beers while Karen and Lynda reached for the red wine. After over 40 hours on passage our tiredness was magically washed away and we sat up until 2.30 in the morning celebrating our successful return from the Coral Sea.


It’s safe to say the sun was high in the sky before we arose from our bunks. All the game boats had disappeared leaving a very spacious looking anchorage behind.
We enjoyed a laid back brunch before hauling up all that chain we dropped a few hours earlier and then moved right into the middle of the bay and re-anchored.  When the armada of game boats returned after their day’s fishing they didn’t seem all that pleased to find us grotty yachties sitting in prime position right in the middle of the anchorage during tournament week. Too bad!


We dropped Anthony and Lynda into the beach so they could do some exploring of the island while we began our second round of investigations in the engine room. A complete clean up of the whole motor and engine room surfaces was again the first task. We then ran the motor for about twenty minutes and went looking for evidence of oil leaking. Of course it had to be in the least accessible spot but here it was. A film of oil was weeping from the valve cover gasket at the very back of the engine.
It all made sense now. At normal rpms the leak was reasonably minor. At high revs in rough conditions with the boat heeling under sail a much larger volume of oil would be in the top of the engine rather than down in the sump. More oil on top of the head under the valve cover means more oil to leak from what we suspected we would find to be a broken or incorrectly fitted gasket. The good news was, if we were correct we were facing a much simpler and cheaper repair. The bad news was, to be on the safe side we had paid a professional mechanic to do a full service on the engine, including resetting the valve clearances which involves taking the cover off. Like our tiller arm and rudder angle sensor issues, we now suspected we had once more fallen foul of expensive tradesmen not doing the job properly and creating problems for us.


Karen’s brother lives in Cairns so we contacted him to see if he could source a new gasket for us and send it over to the island on the ferry. Next day he got back to us to say that no one in Cairns stocked what we needed so we began chasing one in Brisbane. By now it was Friday afternoon and true to form for Australia we were not going to be able to get one sent until after the weekend. It would arrive in Cairns on Tuesday so we decided we would too. In the meantime we’d stay put and enjoy the delights of Fitzroy Island.
These involved incredibly good walks maintained by the Governments National Parks Department to wonderful places such as the Secret Garden, Nudie Beach, the old lighthouse and the summit. 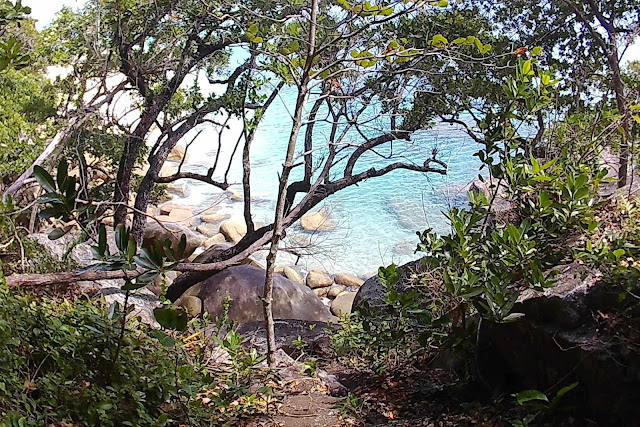 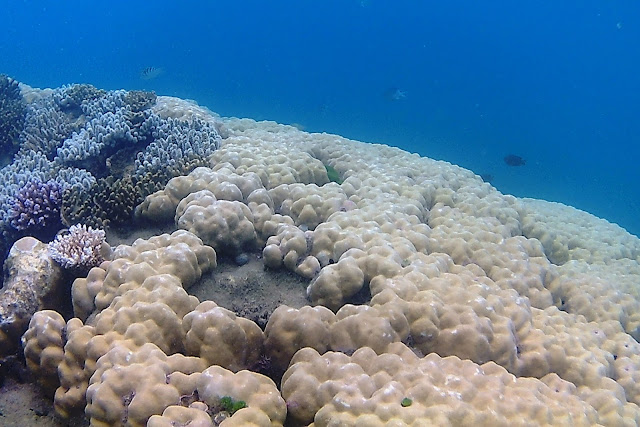 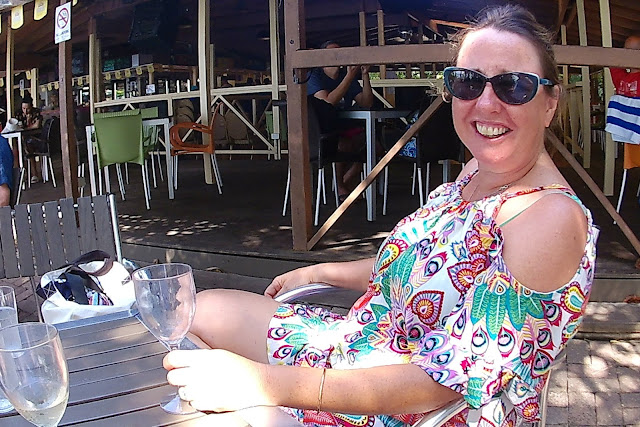