Michaelmas Cay - Another tourist trap cruisers should not avoid.


Michaelmas Cay lays 23 Nautical Miles or 41 Kilometres North East of Cairns and is another Great Barrier Reef tourist hot spot. Each day a three large commercial boats transport hundreds of visitors to the small sand cay to see up to 20,000 breeding pairs of birds that roost on the islet depending on the time of year. Michaelmas is also surrounded by pristine coral reef and prolific marine life as it is a fully protected conservation green zone. This makes it another prime snorkelling site which was the major attraction for us to visit. Once again we weren’t going to let a few hundred tourist scare us off.


It was just a very short five mile hop for us from Vlasoff Cay so we got underway with a leisurely 8.30am start which we thought would get us to the anchorage before the tourist boats began arriving from Cairns. We clearly under-estimated the pace of the high speed catamaran, Sea Star, which covered the distance from Cairns very quickly blasting past us as we made our approach to the anchorage on the cay’s northern side. Their arrival ahead of us did provide us the opportunity to see which way they went in through the many coral heads.


With Rob standing high on the pulpit of the bow with a good view of the bombies hiding under the clear water and Karen helming, we carefully followed their lead and picked our way through. Karen got very concerned at one stage as again the electronic Navionics chart in front of her did not agree with reality. There are two public moorings at Michaelmas. One is rated for a 10 metre monohull and the other up to 25 metre but both were occupied when we arrived so we anchored in seven metres of water over good clean sand with comfortable swing room clear of the nearby coral heads.


Take a look at our track below. According to Navionics we ran aground but in fact never saw less than 12 metres on the depth gauge as we passed over what is shown as a drying reef.


Virtually as soon as our anchor way on the bottom, Our Dreamtime was surrounded by a welcoming party of large bat fish and a huge giant trevally. We were quick to lower the dinghy out of the way and put the swim platform down so we could get into the water to say high. Despite the national park regulations they must be in the habit of being fed by visitors as they showed no fear and got right up close and personal.  They became our constant companions for the net four days.
﻿ 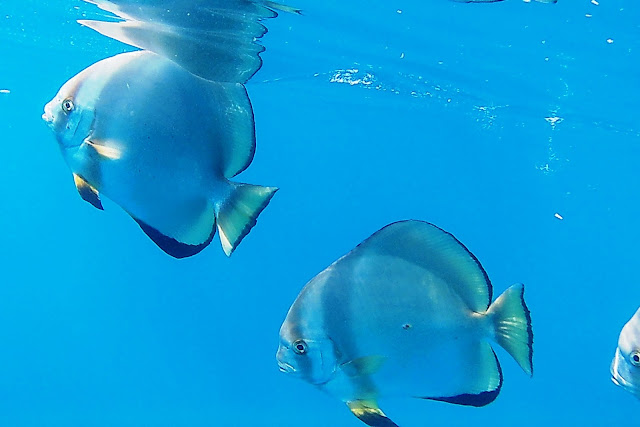 We didn’t venture far from the stern of our boat in the water though as we were not too impressed with the tenders off the tourist boats racing around at high speed ferrying patrons on and off the cay and to glass bottom boats etc. We didn’t fancy being run over by one of these cowboys. Instead we had a relaxing time onboard before heading ashore mid-afternoon as the commercial boats were leaving. By now the two yachts on the public moorings had also left and we had the whole anchorage and cay to ourselves, apart from a few thousand screeching birds of course.


People are only permitted onto a very small portion of the cay with the rest reserved for the nesting birdlife. The hours you can come ashore are also restricted to 9.30am to 3.00pm. As we stood at the rope which borders the visiting area well within touching distance of many birds they seemed totally nonplussed by our presence. When on the cay the noise can be wearing and the smell of tons of bird droppings is far from pleasant. It was enough to cut short our plans of a romantic interlude drinking a bottle of bubbles all alone on this tropical coral cay. Neither noise or small were an issue for us just a hundred and fifty metres away on the boat so that’s where we finished the bottle and enjoyed the sunset.

Next day we enjoyed a cooling swim early before the tour boats arrived then put our kayak down and had a fantastic paddle all around the cay and over much of the surrounding reef while the hordes did their thing. Our friends, Matt and Deb on La Jorja arrived during the day and picked up the heavier of the moorings just in front of us.


The last of the tourist boats slipping their mooring to head back to Cairns was our signal to go snorkelling in peace. While not quite up to the exceptional standards set by our underwater experiences at Green Island, Michaelmas Cay was still very good with plenty of colourful coral, giant clams and abundant marine life. Again the fish were far less inclined to dash away from us here than in non-green zone areas we dive. There was also a greater number of large fish to be seen. One massive giant trevally did become a bit of a pest though as it repeatedly tried to bite our swim fins. Not sure what that was about.


Day three was a repeat of day two with more kayaking and snorkelling and a very social time on La Jorja for sundowners and tall tale telling. Matt and Deb left the next morning to put their cat in Bluewater Marina for a few days while they flew home to Brisbane for a quick visit home. No doubt our tracks will cross again before long. 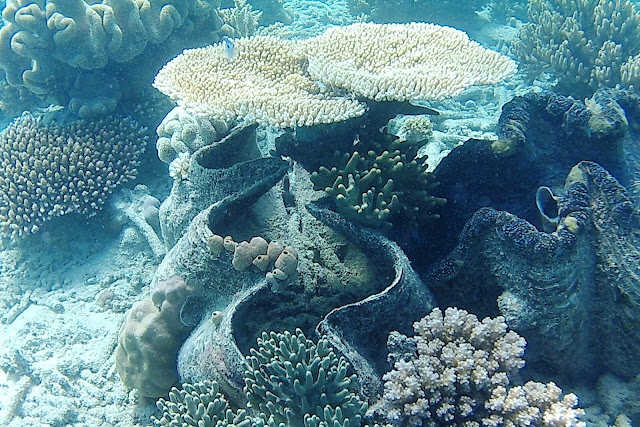 As we had been experiencing perfect reef weather and really enjoying all that this beautiful spot had to offer we stayed on for another day of early morning swimming, lazing about on the boat while the tourist invasion took place then more peaceful underwater times in the hours after they left.
Michaelmas Cay is certainly another piece of paradise we would recommend to other cruisers despite it qualifying for the derogatory title of Tourist Trap. The invading masses are only at the cay for five hours a day leaving the other nineteen to be enjoyed. It’s simply a case of kicking back and biding your time.