Fitzroy Island to Cairns for repairs.


We had enjoyed our stay at Fitzroy Island so much it was not easy lifting the anchor and making our way towards Cairns but we were keen to fit the new valve cover gasket we had waiting for us there. We needed to see if it cured the oil leak that had torpedoed our passage to Papua New Guinea. We had originally feared our problem was a leaking rear main seal but after further investigation at Fitzroy we were now very confident the much easier and cheaper to replace gasket was the culprit. We wouldn’t be sure until the new one was fitted and test run but that would be a reasonably quick process.
Such was his optimism that Rob was already looking at forecasts searching for a suitable weather window to continue our journey to the Louisiade Islands. Leaving from Cairns would be a lot harder than the more southerly departure point of Townsville but we were hopeful of finding some suitable conditions with workable wind angles for the crossing.


We motored away from the island and set sail with a moderate south easterly pushing us along. The sky was fairly overcast and we did experience a few light showers. Sunshine would have been nicer but the sail was pleasant enough.


Approaching the channel into Cairns, Rob checked the temperature on our deep freezer and was horrified to find it was sitting at +3c despite having been running all morning. Sure enough we could hear a slight hissing sound and suspected a refrigerant gas leak. Both the freezer and fridge cabinets run off the same compressor so we now had an all new serious problem. After having spent thousands of dollars on having a new motor and condenser fitted for the system before we left Brisbane we were not impressed.  What the hell else could go wrong?


Fortunately we have a 12v camping fridge/freezer in the salon which we normally only use for bait and cold drinks. That bait went overboard and the drinks came out as three months supply of food was transferred from the deep freezer avoiding a very expensive meltdown.  The contents of the fridge were then moved into the freezer which would hopefully keep things cool enough until we could get a refrigeration mechanic  aboard. A Google search was begun immediately to hopefully find someone available to have a look at it when we docked in the marina the following day.


We were anchored up in Trinity Inlet opposite the Cairns Marlin Marina by 1.00PM. At almost $70 a night for our 42 foot ketch this is one of the more expensive marinas on the coast and we had no desire to spend any more time there than necessary. We planned to go into the marina first thing the following morning to give us a full day to make our repairs on the dock.

In the meantime we settled back for a nice lunch on the stern enjoying our view of the Cairns skyline. We even discovered we had a welcoming party in the form of a moderate sized crocodile lazing on the mud bank off our beam. It was a very timely reminder that the North Queensland Coast is a place to be careful when around the water. You can be sure we never waste time getting in or out of the dinghy from the swim platform at water level.

We slipped into our berth early the next morning. Karen, Anthony and Lynda got started on all the usual marina chores off rubbish disposal, water filling and boat wash down while Rob went to the office to check in and collect the all import parcel containing our replacement gasket.
Once we had it in our hot little hands we removed the valve cover to have a look at the existing one. As suspected, it had not been fitted correctly by the professional mechanic paid to service the engine in Brisbane. The rear section had slipped out of alignment and was not sitting where it was supposed to seal between the cover and cylinder head. There was only some silicon smeared in there which had failed to seal properly as well. Once more we were victims of shoddy work by expensive so called professionals.

We thoroughly cleaned the valve cover and all surfaces before fitting the gasket taking great care that it sat exactly where it was intended to. We let it bond well to the valve cover before bolting it onto the motor. After running  the engine for over half an hour we were very relieved to find no sign of any oil leaks anywhere.


Unfortunately the refrigeration proved more troublesome and much more expensive. We weren’t able to get a fridge mechanic on board until the following day so it did cost us an extra night in the marina. What he discovered was worse though. Our 18 month old refrigeration compressor had a worn shaft and badly leaking seal and he couldn’t explain why it would have gone so quickly. We would need a new compressor from the south which wouldn’t arrive until the following week. More time lost, more money gone and we were fast running out of both. The Louisiades were beginning to look a long, long way away.


There was nothing for us to do but go back out at anchor in the inlet and enjoy the delights of Cairns for a while before returning to the marina the following week to have it all fitted. We then stayed a few more days in in the inlet to make sure it all kept running properly.  The wind continued to blow from the east anyway so it wasn’t as if we could go anywhere we wanted to anyway. Such is life.
We did enjoy ourselves catching up with some family and friends and visiting some of the city's very attractive spots. It was also amazing how many cruisers we were able to renew friendships with in the marina that we had previously met up and down the coast. Life is far too good to let unplanned problems stop us from having fun. 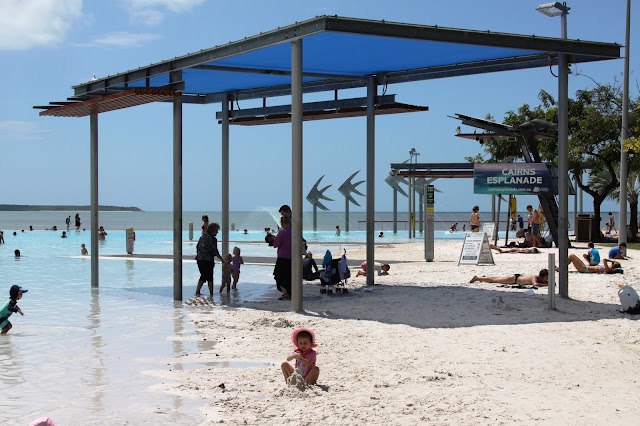