We had been holed up in Cid Harbour for a week while the wind blew and the rain fell. Although intermittent showers were persisting, at last the wind was settling down. Naturally we were keen to move on but Rob was especially so. The following day was our Anniversary and surrounded by dozens of charter boats in Cid Harbour was not where he wanted us to be.


The Whitsunday Islands are world class cruising grounds so finding somewhere truly secluded during charter season is not easy but there are some spots less travelled than others. We upped anchor a had a short but pleasant sail north to Marcona Inlet on Hook Island. It’s a secure anchorage and very beautiful spot but doesn’t have the high profile of nearby and usually crowded Nara Inlet. Most people anchor in a bay half way up the inlet but we made our way all the way to the end and were delighted to find the only two other boats there were friends Greg and Sue on Sunshine and Brian and Petra on Bella.


We got hooked in and arrangements were soon in place for sundowners aboard Sunshine later on. We then got the dinghy down off the davits and did some exploring around the inlet and landed on one of the beaches for a stroll.


Friends of Greg and Sue’s also arrived during the afternoon on another cat but there was ample room for us to be well spread and not in each other’s pockets. Susan and Alan from Africat made it eight for sundowners and as always, drinks on Sunshine proved to be a barrel of laughs.


We’ve always tried to make birthdays and particularly our anniversary special events in our family. We started a tradition on our 10th anniversary when Rob organised a three day break as surprise for Karen. The morning before the big day he simply said “Pack some comfy clothes, we’re going for a drive.’  The car had already been secretly loaded up with delicious foods and probably too much drink. Away we went for a wonderful time to celebrate our first decade of marriage in front of the fireplace in a secluded mountain chalet. Very suitable as our anniversary is in mid-winter.


Each year after that it became Rob’s mission to organise surprise anniversary celebrations for Karen. The 12th proved to be a real surprise when she snooped enough to correctly guess that we were flying to a destination rather than driving to somewhere nearby like previous years. Somehow she then concluded that we were going to chilly Melbourne. It wasn’t until after we took off and the pilot welcomed us over the PA aboard our flight to tropical Cairns that she realised why she was the only one on the plane with an overcoat.  It proved an expensive trip by the time she went shopping and bought enough light weight clothes for our week long stay plus an extra bag to take it all home.


In the nearly two decades since we have popped the champagne cork to celebrate in Paris, Bali, the ski fields of New Zealand, Hawaii, Ibiza, Rome and many fantastic places in between. Once we began our cruising life we wondered if we would have to forego this annual indulgence. Fortunately it’s only taken a bit of planning and imagination for us to continue to celebrate each year of our union in style.


After days of miserable weather, magically July 20 dawned clear and calm. We loaded the dinghy with everything needed to make our 31st Anniversary as memorable as any and made our way to one of the number of small beaches in the inlet. Tree lined with beautiful sand lapped by crystal clear warm waters, the setting was perfect. There was even a rope swing seat hanging from one of the trees.  It was our own private tropical paradise.


We soon had our chairs and improvised table set under overhanging trees complete with Moet Champagne and a cheese platter. The rocks at one end of the beach became the location for our bush kitchen where we prepared the rest of our three course celebration lunch. 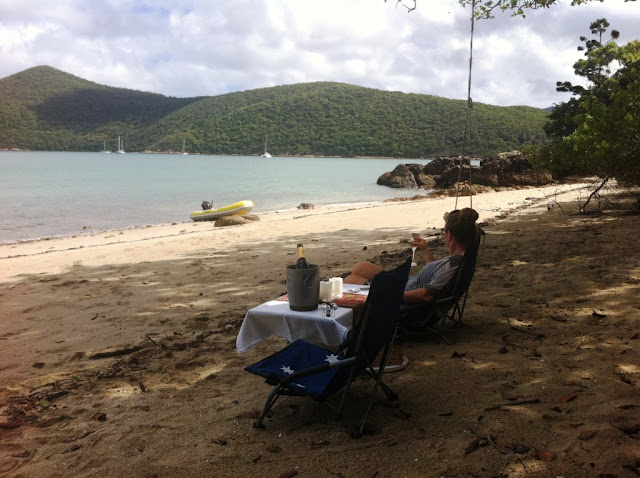 Rob fired up our portable gas burner and soon had the duck breasts rendering down nicely in the pan. These were to be accompanied by baby potatoes and green beans.


Sitting in the sunshine on our own private tropical beach, eating delicious Crispy Skin Duck Breast in Raspberry and Chocolate Jus with French Champagne we were entertained watching turtles surface nearby and a sea eagle soaring above. Then there was desert, Apple and Almond Tort with Passionfruit and Chocolate Sauce. Both the setting and our self prepared treat easily equalled any of our previous anniversary celebratory meal experiences including the one we had on the Eiffel Tower in Paris.


What a magical day! We have absolutely no idea where we will be for our 32nd Anniversary. Guess it will be a surprise.
Our cruising life has certainly not impacted on making anniversaries special so what about birthdays? Well Karen’s big Five Oh birthday was just a scant eight days later. You’ll have to read our next blog to find out about that blast.

We love to receive comments on our blog from readers. If you do leave a comment and you also have a blog, please leave a link as well. We'd like to click over for a visit and leave you a comment too.
To stay right up to date with what we’re up to  and see lots more photos check out and 'like' our Dreamtime Sail Facebook page at DreamtimeSail