Rock and Rolling our way to Townsville from Cape Upstart.


The alarm tone of the I-Phone sounded shrilly at 5.00am but had serious competition from the wind howling through Our Dreamtime’s rigging in her anchorage at Cape Upstart. A quick online check of the weather forecasts said we should be having 16-18 knot south easterlies. They had the direction right but our wind gauge was reading 25 knots with frequent gusts over that. It was now time for another early morning debate in the master Cabin.  Karen snugly under the sheets trying not to open her eyelids while advocating staying put as the winds are too strong and Rob hovering above putting forward the case that the higher gusts are probably a local effect funnelling over the high hills of the Cape and it was likely to be lower as predicted once we were away from the .


The problem was that the forecasts indicated if we didn’t sail the 73 nautical miles to Townsville today we’d be stuck here in Upstart limbo for at least another three as a bigger blow was on the way.  Convinced  getting underway was the right strategy, Rob played dirty by brewing a pot of fresh coffee. As soon as the enticing aroma reached the stern, Karen’s caffeine addiction kicked in and she just had to arise.


We then did manage to get organised and weigh anchor in advance of the dawn. As we expected to be sailing deep downwind we opted to pole out the genoa,  run with the second reef in our mainsail and leave the mizzen in the sail bag. Much to Rob’s relief, the wind did ease into the high teens once we were away from the shoreline. He may have never heard the end of it otherwise.


The first leg of the passage took us past the Burdekin River delta well offshore. By mid-morning we were running before freshening winds parallel to the coast along the low and seemingly never ending Cape Bowling Green. How it ever got its title is a mystery because the seas all around it are rarely flat like its namesake. Cape Rolling Green would be much more appropriate. The wind was back around 25 knots and the swells rolling under us were now two to three metres. Our Dreamtime was handling the conditions like the solid lady she is while her crew literally went with the flow as she was rocked and rolled along. 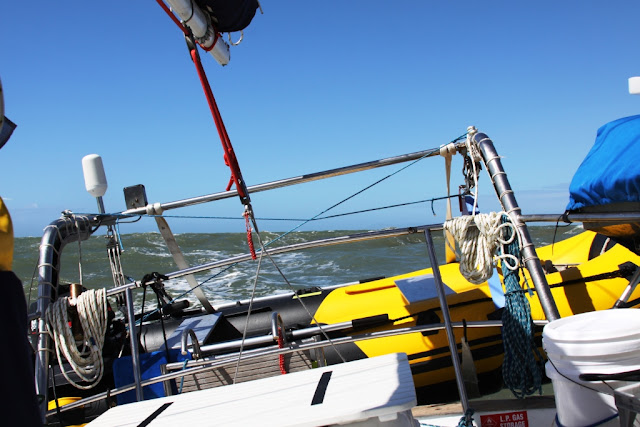 Keep an eye on the horizon in the video above to get an idea how we were rolling down the swells.

It was near lunchtime before we began rounding the low sand spit at the tip of the Cape and the wind was now gusting over thirty knots. Boat speed was regularly near ten knots as we surfed down swells. Fortunately within half an hour of altering course to aim for Cape Cleveland, the north western extreme of Bowling Green Bay the wind abated to low twenties and the sea state eased a little.


So far the trip had been bouncy and quite fast but nicely uneventful after our last attempt at this passage three days previous when our steering broke. We were enjoying some chicken wraps Karen pre=prepared for lunch when out of nowhere Rob spotted a mass of white water about eighty metres directly ahead of our bow. The charts showed no shoals or reefs in the area and we were both instantly on our feet peering ahead trying to identify what potential danger lay before us. Then who knows how many tons of humpback whale shot out of the water about fifty metres ahead exposing almost its whole length before crashing back in an explosion of white water. We had no time for photos this time as a quick and large turn to port was our immediate priority as the gentle giant breached one more time off our starboard bow before disappearing.


With that excitement over we were careful to give the dangers of Salamander Reef a reasonably wide berth as we approached Cape Cleveland. As we sailed by its picturesque lighthouse Townsville came into view. Unbelievably, as we turned our bows towards the fairway marker the wind swung North East and we still found ourselves sailing deep downwind in twenty knots.


We avoided a couple fast Magnetic Island Ferries as we approached the port and edged our way into the anchorage behind the breakwater and just outside the marina. It is very shallow and we found ourselves anchoring in just two metres of water at low tide.


What a sleigh ride. At 72.6 nautical miles (135 kilometres) in just over ten hours it was our longest ever day hop and one of the fastest. We were certainly relieved to have arrived in daylight as we had suspected we may have had to anchor up in the darkness. We opened a bottle of red and enjoyed it with the lamb shanks that had been cooking away all day in our Thermos Shuttle Chef before collapsing into our bunk. 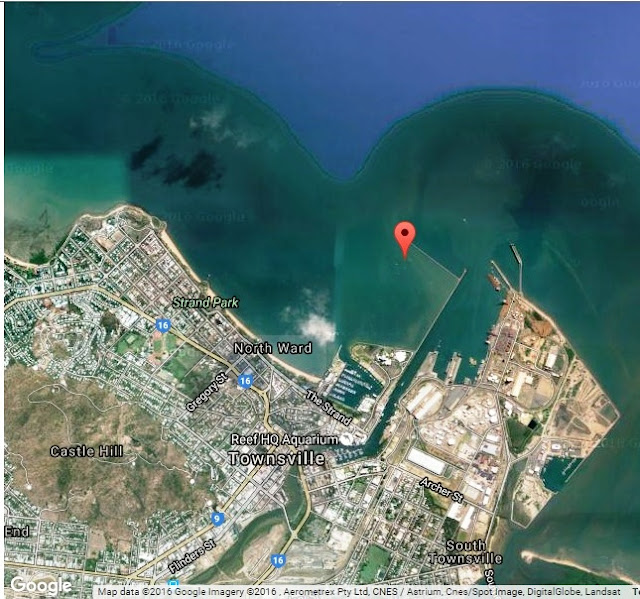 The next few days were busy getting stuck into our final preparations and sourcing last minute things we needed. Our new friend, Rod, kindly chauffeured us all over town on Monday before hosting us for a magnificent dinner at his home with fantastic views over much of the city.
Two and a half hours were lost on Tuesday morning in the offices of Australian Border Control filling in reams of superfluous paperwork we had no idea existed so we could clear customs and leave Australia. The levels of bureaucratic  bullshit in our country is ridiculous. There is miles of information online about what is required when arriving in Australia with a yacht but almost nothing about what you have to do to leave.


We moved into a berth at the Breakwater Marina on Wednesday to make it easier loading on provisions etc and that’s where we had to be for final clearance by customs. Long time friends Peter and Marianne lent us a car which was put to good use picking up supplies and getting last minute bits from chandleries. Anthony and Lynda also moved aboard and settled in. That night we were joined by Peter and Marianne along with Stephanie and Macca for drinks and plenty of laughs as always.