Upwind to Cape Upstart but having a Whale of a Time


We were back to our routine of being up before the sun to prepare crew and boat for the day’s passage 55 nautical miles north where we planned to anchor in the shelter of Cape Upstart. The first task every morning is to check the latest weather. If it’s not right we can go back to bed. It showed winds of 15 -18 knots from the south west early but turning through south to blow from the south east by mid afternoon.  All sailable aft of the beam so the bunk was not the option and we moved on with our prep.


Coffee and breakfast for the crew – Tick. Engine room checks – Tick. All loose items below secured – Tick. Hatches and port holes closed – Tick. Sail covers off and halyards attached – Tick. All electronics on and checked – Tick. Motor started, oil pressure and cooling water flow checked – Tick. Anchor up  - Tick. Motor out of the passage into clear water and raise sails – tick. Steer the course and sail on downwind to our destination – FAIL!


With all the millions of dollars spent on weather forecasts you’d think they would be getting better at it by now but NOOOOOOOOOO! The wind was more west than anything. Not good when you want to go northwest. As soon as we came on course we found ourselves sailing to windward and bashing over lumpy seas. We told ourselves things would get better because the wind would swing around. WRONG! It hardly turned all day but what it did do was strengthen.  By the time we passed by Bowen it was blowing 18-20 knots consistently. We had a second reef in the main when sailed by the Abbot Point coal loading facility with the wind now at 25 knots and rounding Cape Upstart was a bit spirited with over 30 knots howling around the points. The yacht in front of us actually turned around at that point and ran back towards Bowen.


So we definitely did not have the pleasant downwind sail we had planned and were very, very grateful for the enclosed cockpit on Our Dreamtime as wave after wave splashed green water over the boat.  To her credit, our fantastic, full keeled Whitby 42 ketch handled the conditions in fine style. It was yet another great confidence builder for us seeing her plough through the seas never putting a foot wrong. You have to love these solid old girls.


OK so the sailing wasn’t fun today but the trip turned out to be AWESOME because we found ourselves in Humpback Whale central. Whales breaching in pairs off the starboard beam. Another pod crossing between us and the boat following causing the helmsman to take avoiding action. Look another pair breaching and tail slapping off the portside. 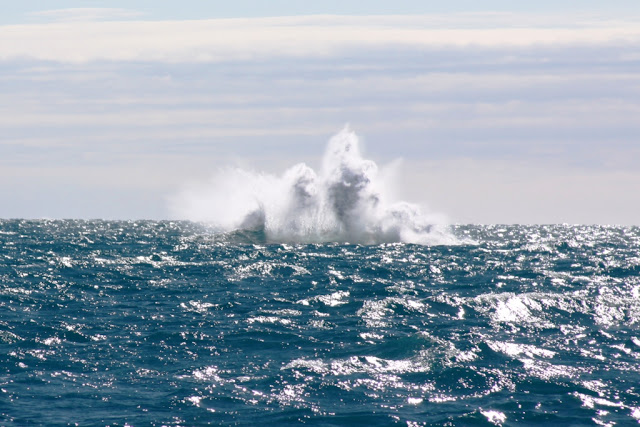 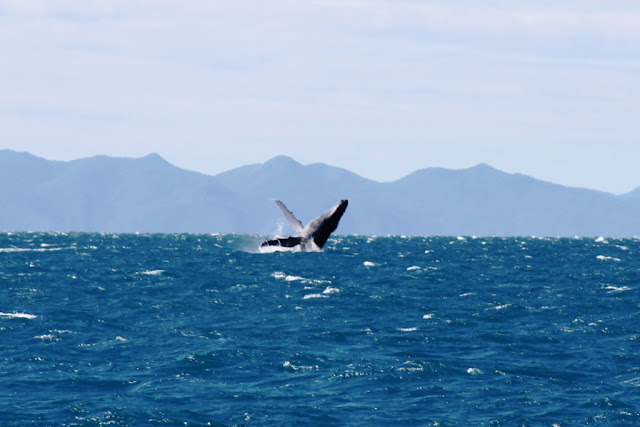 Then our biggest shock. Out of nowhere a massive whale surfaced right against our hull on the port side. It’s head was level with our centre cockpit as it stared at us through a huge black eye and let go a bellowing exhalation of whale breath from its blowhole. There would not have been a foot between our boat and this monster of the seas whose tail stretched back well beyond our stern. After scaring the hell out of us, it dipped below the surface and swam alongside clearly visible a few metres down. When it turned and went under the hull we held our breath waiting for a bump, bash or crash but it resurfaced just aft on the starboard side by which time we’d got over our initial fright and reached for a camera. He surfaced a couple of more times before disappearing into the deep.


We were now seriously on whale watch and found ourselves twice making significant alterations to course to avoid potential collisions. The law of the sea may require power to give way to sail but whales certainly don’t from our experience off Abbot Point.

﻿
When we did make it through the gusting winds off Cape Upstart and sailed into Upstart Bay we planned to shelter on the Cape’s northern shore from what was supposed to be south easterly winds in the afternoon and through the night. What we found instead was the wind still coming from the south west at near twenty knots and blowing straight onto that shoreline. After looking at the charts we elected to furl sail away and motor straight into the wind to go deep into the bay and anchor as close to the low shoreline as possible. We felt this would provide us with the calmest anchorage possible in the circumstances. 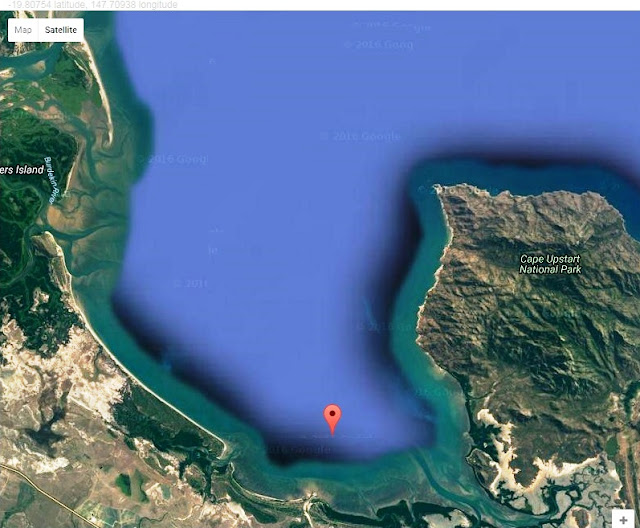 The tide was just past the low so we knew we could close the shore until we found suitable minimum depth  to safely anchor. The bay shoals so slowly that we anchored in just three metres of water but were still almost two nautical miles from the beach near Molongil Creek. However the sea state was quite reasonable and dropped out further to provide a fairly calm evening and the good night’s sleep we needed after our rock and rolling passage from Gloucester Passage.