The weather reports were showing some potentially very strong winds on the way. A real problem was that none of the forecasters were sure exactly what was going to happen but all agreed some  fairly serious weather was likely. As much as we were absolutely loving our time at Thomas Island, we knew the anchorage in Cid Harbour on Whitsunday Island’s north east shoreline would be a far safer and more comfortable place to ride out whatever may arrive.  It was time to go.

A number of the boats anchored with us were heading for the shelter of the marina at Hamilton Island but it’s far from our favourite place. Priced at $130 a night to berth our 42 foot boat its more than double what we pay in any other Queensland marina while everything ashore is also outrageously priced. All for the privilege of being surrounded by thousands of holiday makers intent on running you over in a golf buggy. No thanks.


A well known feature of the Whitsunday region is the very strong tidal flow experienced here. The outgoing tide runs north so we timed our departure for the twenty four nautical mile passage to arrive at Cid Harbour before it turned mid morning. Yep! We were up and underway in the dark again but were rewarded with an absolutely awesome sunrise.


The new day brought a modest southerly breeze blowing in the low teens providing us a reasonable wind angle for the run across to the southern tip of Dent Island. Here we would turn and run up the Whitsunday Passage. With full main, mizzen and headsail set, the current assisted us to get along very pleasantly above seven knots.

Through the morning the wind did ease and progressively swung more to the south east. As we passed the Dent Island lighthouse and altered course towards the entrance to Cid Harbour we found the wind directly on our stern. We then left the mizzen and headsail out to starboard but switched the mainsail to the port side and made our way gently wing on wing dead down wind.


By the time we gybed the Mizzen and Genoa to run through the Hunt Channel between Whitsunday and Cid Islands the wind had eased even further but it was really pleasant ghosting through slowly with the last of the outgoing tide. We were enjoying the sail so much we didn’t want to stop but resisted the urge to continue on. We sailed all the way to Sawmill Beach before furling sails and finally restarting the motor to anchor.

We were surprised to find there was plenty of space in the anchorage despite the forecast blow coming. We were able to anchor right where we wanted to reasonably close to the beach. We made sure the anchor was well dug in and laid out forty metres of chain with plenty of swing room around us. The sunshine and beautifully calm conditions provided no hint of the weather on its way.

We got settled in before enjoying a nice afternoon catch up with Geoff and Daphne on board Wai Whare anchored in front of us followed by sundowners with Sheryl on her catamaran Sub Zero along with the crews of a few of the other boats around us. You can certainly entertain a lot more people on a cat than we can on our mono.
We arose next morning to more mild weather however the change was now due to arrive through the night. The population of the anchorage had swelled considerably by now and a continual stream of boats arrived all day. We decided to make the most of the temporary weather reprieve and headed ashore to do the delightful walk from Sawmill Beach through the rainforest over to Dugong Beach.


It was very relaxed and much less strenuous than the four hour return trek up to the magnificent views from Whitsunday Peak Rob had done on our last visit here. You can read the story and see those photos here  Cid Harbour-Whitsunday Island. 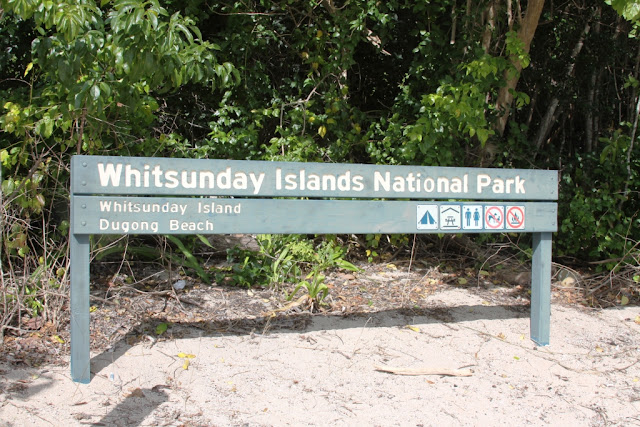 
Sundowners that evening was quite an affair with Sawmill Beach covered in dinghies as over forty cruisers converged for drinks nibbles.  Along with meeting many more new acquaintances it was fantastic to also catch up with mates Linda and Bill Frylink Anderson who were in the Whitsundays celebrating a friend’s birthday with a group on a chartered catamaran.

The wind did begin to arrive overnight and we awoke to a wet and windy morning. Courtesy of the excellent weather site Willyweather, we could see that it was blowing consistently in the high twenty knots region just a few miles to our south at the Hamilton Island Airport. Tucked into the high hills of Whitsunday Island we were quite comfortable only seeing low to mid teens. There was nothing for it but to spend most of the day with a good book or in Karen's case, do some baking. Yum.
﻿﻿
A good friend from Ipswich, James, had his motor cruiser berthed in the Hamilton Island marina and was flying in that afternoon. Before he left home we had suggested to him that his choice of boating weather left a bit to be desired but he was not to be dissuaded. He was coming up to attend a SICYC (Shaggers) charity ball that weekend at Airlie Beach and was determined to get a couple of nights out of the marina along the way so he decided to visit us at Cid. The reality of fast cruisers was driven home to us when just after messaging us to say he was leaving the marina we picked him up on our AIS doing almost 23 knots. Just minutes later we spied his huge bow wave charging through Hunt Channel towards us. His big Maritimo had taken just over twenty minutes to cover the 8 nautical mile trip that normally takes us a couple of hours to sail.


Conveniently there was room for him to anchor in front of our bow but the rain began to fall in earnest soon after so we decided catching up could wait until morning. By now the anchorage was reasonably crowded but, with the exception of a charter yacht that anchored a little close to our starboard side, we were very comfortable with the space we had for the stronger weather to come. The weather gurus were all agreed that a very unseasonal upper level low was developing that would bring gale force winds and very heavy rain but what they weren’t clear on was where exactly it would form.


Luckily for us it eventuated just to our south making Cid Harbour the perfect place to ride it out. We did experience heavy rain throughout the night and while the wind piped up into the 20+ knot zone with individual gusts reaching 30, we were clearly better placed than Hamilton Island. Rob was up quite often during the night making sure that neither us or the boats around were dragging anchor. He also kept an eye on the weather station at the airport which was recording winds consistently near 40 knots with gusts above that. The system did head further south with conditions easing through the following morning for us but bringing high winds and flooding rains to areas from Mackay to Yepoon.


In the daylight Rob did discover one little thing he forgot to do in preparation for the weather. We had taken the sensible precaution of raising our dinghy onto the davits before the blow but he had neglected to take the drain bung out. The fuel tank and various other odds and ends were now floating around in our poor dinghy which held about 30 centimetres (a foot) of fresh water adding who knows how much weight. Oops. At least it was easy to drain by just pulling the plug.


On Max Sea Lady James had lowered his dinghy when they arrived the previous evening and looking over it also appeared low in the water so we sent him a message to have a look. Turns out where Rob had forgotten to remove the bung when we lifted our dink, James had forgotten to put it in when he lowered his. Double oops! Out came the bucket for some serious bailing.

Once all was sorted we went across for coffee and cake with James and Chris – which turned into Canadian Club and pizza about lunch time before degenerating to liquors and whatever was left in the galley by sunset. We know we laughed a lot but that’s about as much as we can remember about Friday.

Next morning James got a couple of cool pics of a seagull on their stern with our boat in the background before coming aboard Our Dreamtime for a visit. As they were heading off to Abell Point later in the morning, we resisted temptation this time and stuck to the non-alcoholic beverages.


Later we also hosted a return visit from Geoff and Daphne off Wai Whare before settling in for a very full afternoon of doing nothing as the drizzle continued.
Sunday then came and went exactly the same way. Such is life.


We love to receive comments on our blog from readers. If you do leave a comment and you also have a blog, please leave a link as well. We'd like to click over for a visit and leave you a comment too.
To stay right up to date with what we’re up to  and see lots more photos check out and 'like' our Dreamtime Sail Facebook page at DreamtimeSail