With only a short 20 nautical mile hop to Thomas Island on the cards for the day, we had no need to get up in the dark for a change and had a relatively leisurely breakfast before getting underway from Brampton Island.


The wind was predicted to blow in the mid to high teens from the south so we expected to have a fairly deep downwind sail until clearing the eastern headlands of Tinsmith Island so we raised the full main, poled out the genoa and away we went. By the time we rounded the island and came to port, which should have provided a better wind angle for the run to Thomas Island, the wind had swung to the south east so the status quo was maintained. Once again a fair sized following swell was running and, with the wind strengthening a little further, we were a little over powered with the full mainsail up. We would have benefited by furling in to first reef but with such a short way to go we put up with the ride.

Considering the established SE swell running, the anchorage at Thomas Island proved far more protected than we had expected from reading the write up in Alan Lucas’s pilot guide. We were very happy with how little of the swell was making it into the bay when we anchored up in just under seven metres of water which would put us in four and a half at the low that night. We were now officially in the Whitsunday Islands. Fortunately for us though, Thomas Island is outside the area that charter boats are permitted to go and there were only three other boats in the anchorage with us. It was school holiday time and, judging by the charter companies radio scheds we heard, the more northern anchorages would have been very, very busy.


Another pleasant surprise for us was finding our friends Geoff and Daphne on the ketch Wai Whare in the bay. They had been great neighbours in Port of Bundaberg Marina last year when we were stuck there for a month getting our transmission rebuilt. We had a relaxing afternoon on board their boat catching up on what we each had been up to in the intervening period.  Later we enjoyed a typically magnificent Whitsundays sunset. 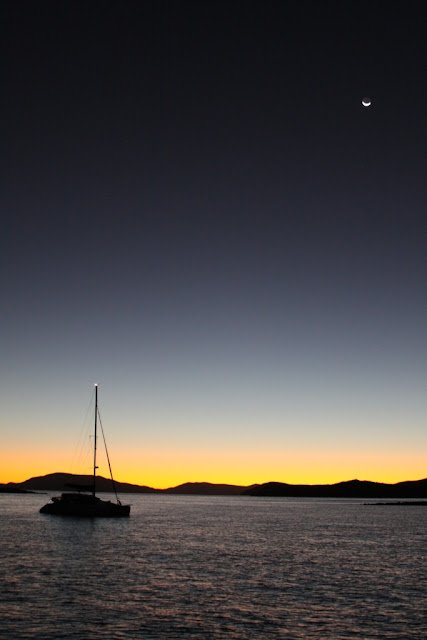 We had no mobile  phone reception in the anchorage but were again able to get internet by putting our Wifi dongle in a water proof phone case and hoist it up the mast. See our blog about this trick at A simple way to extend your Wifi range afloat. We were also able to get TV reception so Karen was once again glued in front of the screen picking up cooking tips watching Master Chef.


The following morning we waved good bye to Wai Whare as they were moving on to CID Harbour while we were spending the day enjoying more of Thomas Island. We went ashore on the well named Naked Lady Beach and had a wander in the sunshine.


The island is heavily wooded and making any inroads from the beach is a challenge however we discovered what appeared to be a trail leading up a dry creek bed at the back of the beach and went exploring.  About 80 to 100 metres on we found a collection of flotsam hanging from trees and realised it marked where the obscure trail left the creek bed and headed off to the left. The rest of the trail was marked by all sorts of items hanging from branches and lead up to a gap in the islands hills and a tiny rocky inlet on the southern side with great views to the Smiths islands. It was well worth the short walk and we’d highly recommend it to any cruisers visiting this delightful anchorage.

We returned to Naked lady Beach where Karen spent some time sketching while Rob did a little more beach combing and enjoyed a dip in the clear water.  We enjoyed our day so much we cancelled plans to leave the next morning. 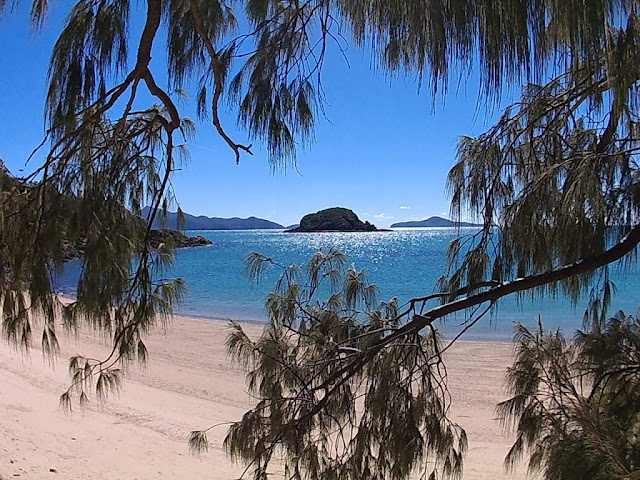 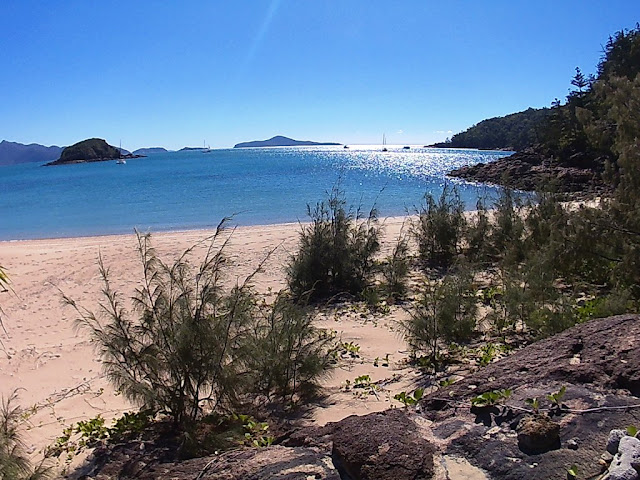 We decided to explore the middle of the three beaches the following day. Although we never found any trails to explore this time Karen did enjoy spending a morning working with her watercolours while Rob kicked back on the beach with a good book.  He was then a very happy boy spending the  afternoon watching the V8Supercars back on the boat. 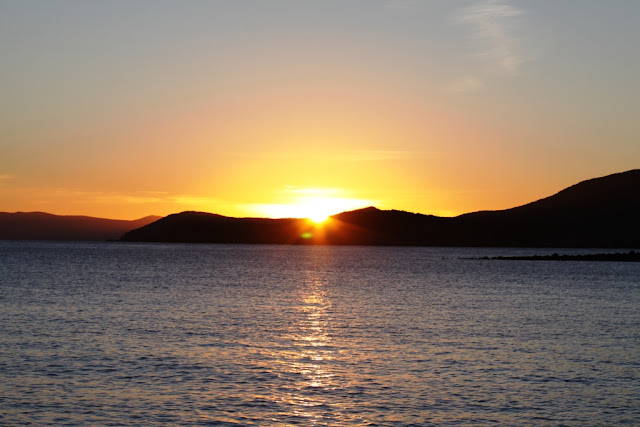 Guess what! We were enjoying Thomas Island so much we decided to do it all again the next day. 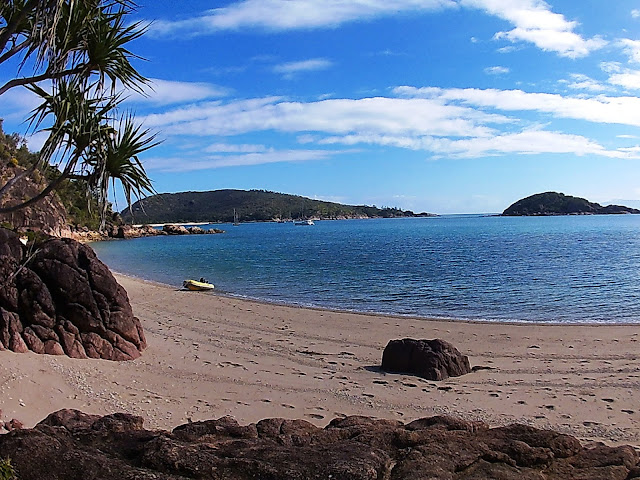 The pattern was set with a morning on the beach then lazy afternoon aboard and we saw no need to change it. Friends we’d made last year, David and Nerida arrived in the anchorage late morning and invited us for dinner on board their catamaran Sea Breeze. We were also joined by Greg and Sue off Sunshine for an evening of great food and lots of laughs. The social side of cruising is great fun.

We had originally planned just a two night stop at Thomas Island but here we were staying yet another day with a heavy morning schedule of doing absolutely nothing. We managed another visit to the beach in the afternoon. Greg and Sue then came over for sundowners and more merriment which was a great way to finish off a fantastic five night stopover at Thomas Island. There was a huge storm moving in from the great Australian Bight towards southern Australia which was going to push some heavy wind all the way up the east coast so it was going to be time to go in the morning otherwise we’d probably still be there.