Rome , not a bad place to celebrate

It only took a change of trains at Pisa to get back to Rome from Lucca and fortunately we’d found some budget accommodation just a block from the big Termini station but by the time we got settled in our room the best part of the day was well and truly gone. We settled for a simple meal at one of the nearby cafes and an early night so as to be fighting fit for some serious exploring of this ancient hub of civilisation. Karen had her trusty map marked out with a long list of must see locations and Rick Steve’s excellent free audio guides downloaded onto her I-Pad so we were all set. 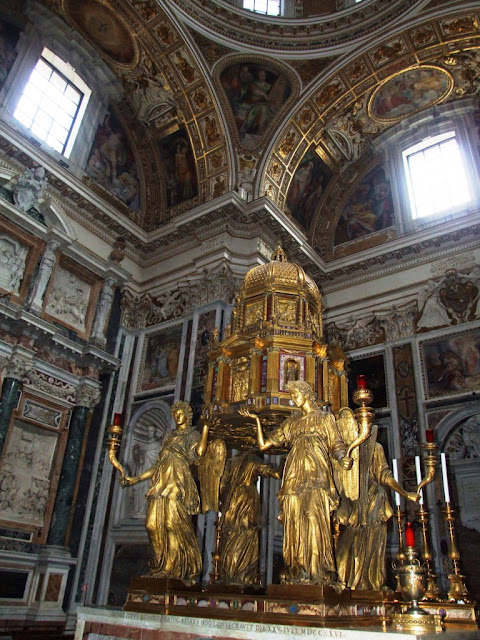 ﻿
Strangely enough our second stop was, wait for it, a church. The Church of San Pietro is relatively small but was certainly worth the walk up a very steep set of stairs to reach. Inside was a magnificent sculpture of Moses by none other than Michelangelo himself. Remarkably the work is actually unfinished as it was commissioned to be a two story high funeral monument for Pope Julius the Second complete with twenty larger than life sculptures. It was never completed because Michelangelo was otherwise engaged on a little job at the Sistine Chapel. 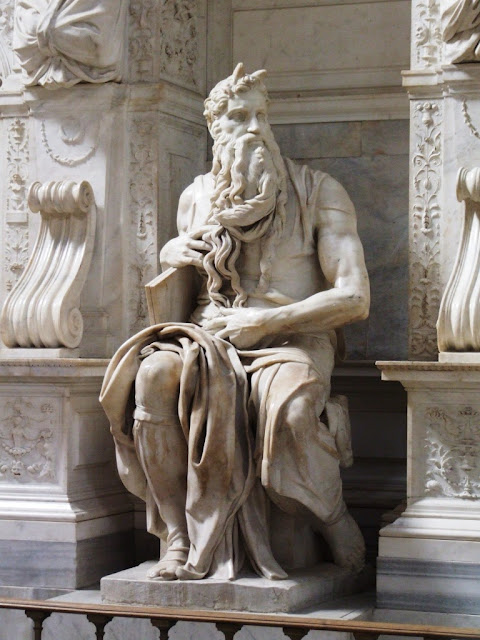 So enough of churches for a while. It was now time for head to the biggest structure of ancient Rome, the Colosseum. Standing in a long, slow moving line, we had plenty of time to research the history of the place while we waited to enter. Constructed from 70 to 80AD, the huge amphitheatre was without doubt one of the great works of architecture in history. It could hold up to 80,000 spectators who could all get in and exit very quickly via eighty entrances circling the oval shaped venue. Patrons received a small piece of pottery with their entrance, section and seat number marked on it to facilitate efficient movement.  The fact it was built in just ten years long before mechanisation is a marvel in itself. The Colosseum was used for gladiatorial contests and public spectacles such as mock sea battles, animal hunts, executions, re-enactments of famous battles, and dramas based on Classical mythology. With the Emperor’s conversion to Christianity many of these uses fell from favour and by the early medieval period the building had ceased being used for entertainment. It gradually fell into disrepair and later suffered damage in an earthquake. Unfortunately it became seen as an easy source of building materials and all of its marble and large amounts stone was removed as the once mighty building became an above ground quarry. A fair portion of the stone used to build St Peter’s Basilica in the Vatican originated here. 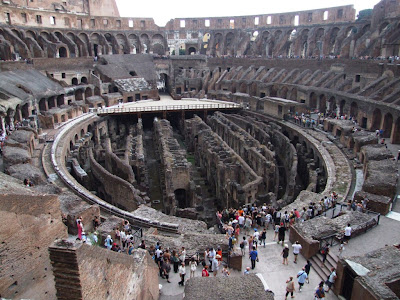 When we finally made our way inside and looked around the interior of the Colosseum from just below the Emperor’s private area, we were a little underwhelmed by what is actually left of the once grand building. The Rick Steve’s audio tour we were using on Karen’s I-Pad did its best to bring the place to life but only reinforced that what’s no longer there far outweighs what’s left. There is quite a good museum area on the top level which includes a number of artifacts, sculptures etc and an artist’s rendition of the building in all its glory complete with retractable shade awnings that covered the entire seating areas of the amphitheatre. We could only imagine how spectacular it must have looked reaching to its full height and grandeur completed coated in gleaming white marble. Oh for a time machine, what wonders could we see. 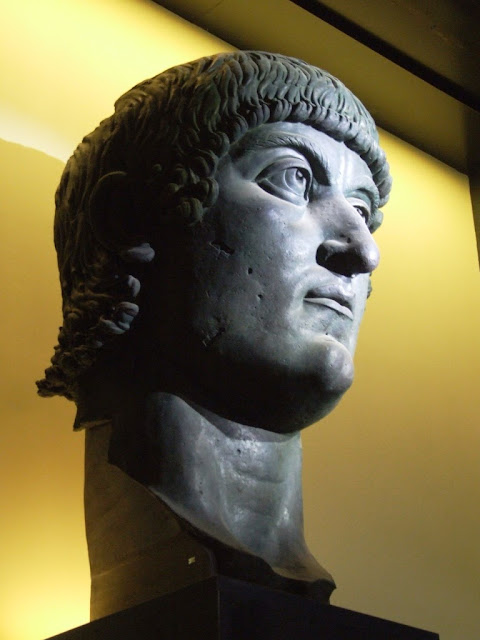 ﻿
After the morning’s walking and climbing the rough, stone steps to the top of the Colosseum and back down,  we were certainly well into our exercise quota for the day but there was so much more Rome and so little time. Lunch was a sandwich on the go as we left the Colosseum at our backs, passed by the hill dominated by the Temple of Venus, a popular wedding photo location apparently, and made our way to the heart of the ancient Roman Empire, the Forum.
﻿
Initially looking down into the valley the Forum is situated in produced yet more thoughts of ‘Is that all that’s left?’. Fortunately over the next couple of hours our friend Rick Steves demonstrated in his audio tour that in the stones that still stand there are incredible human stories to be found.
For example, in ancient Roman religion, Vestal Virgins were priestesses of Vesta, goddess of the hearth and regarded as fundamental to the continuance and security of Rome. They cultivated the sacred fire that was not allowed to go out. The Vestals were freed of the usual social obligations to marry and bear children, and took a vow of chastity in order to devote themselves to the study and correct observance of state rituals that were off-limits to the male colleges of priests. The Vestals were committed to the priesthood before puberty (when 6–10 years old) and sworn to celibacy for a period of 30 years. These 30 years were divided in turn into decade-long periods during which Vestals were respectively students, servants, and teachers.
Afterwards, they were retired and replaced by a new inductee. Once retired, a former Vestal was given a pension and allowed to marry. A marriage to a former Vestal was highly honoured, and, more importantly in ancient Rome, thought to bring good luck, as well as a comfortable pension. Ancient tradition required that a Vestal Virgin found to be unchaste be buried alive within the city, that being the only way to kill her without spilling her blood, which was forbidden. However, this practice contradicted the Roman law that no person might be buried within the city. To solve this problem, the Romans sealed the offending priestess in a small underground chamber with a nominal quantity of food and other provisions so that the Vestal would not technically be buried in the city, but instead descend into a 'habitable room' where she would then die. It would have to have been a lawyer that came up with that loophole.
﻿
﻿ 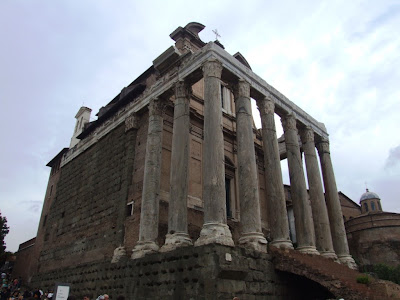 Great care is needed to keep your footing as you make your way down the well worn, now uneven stone roadway that runs through the centre of the forum but realising that you are literally walking in the footsteps of Julius Caesar and other of the biggest names in human history certainly touches the soul. This was the path conquering generals paraded triumphantly on their return from great victories bearing new riches for Rome. Standing by the spot Mark Anthony delivered his speech at Caesar's funeral made famous for eternity in Shakespeare's play and seeing flowers still being laid on the actual rock that the slain Emperor's body was cremated atop converts this place from a pile of stones to a truly surreal experience.
﻿
From the Forum we made our way to the very impressive War Memorial and tomb of the unknown soldier. It is a huge, white marble building, ornately decorated with sculptures and a very fitting monument to those that served. 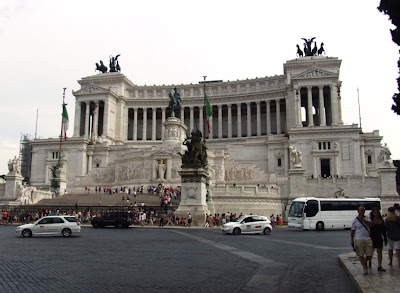 We then wondered through a number of very old, narrow streets to reach a bridge over the Tiber River and entered the old Jewish sector to embark on another of Rick Steve's magical mystery audio tours. This proved well worth the additional kilometres walked even if by now our feet may have disagreed. The area is charming and the tour took us to two sites that had originally been homes in which early Christians had gathered to pray in the time of the persecutions. Now two beautifully decorated churches stand in their place. 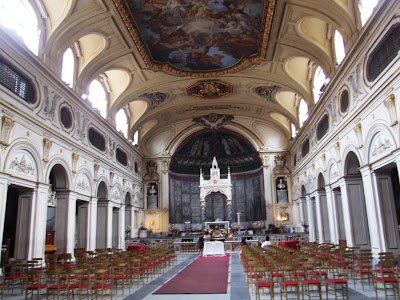 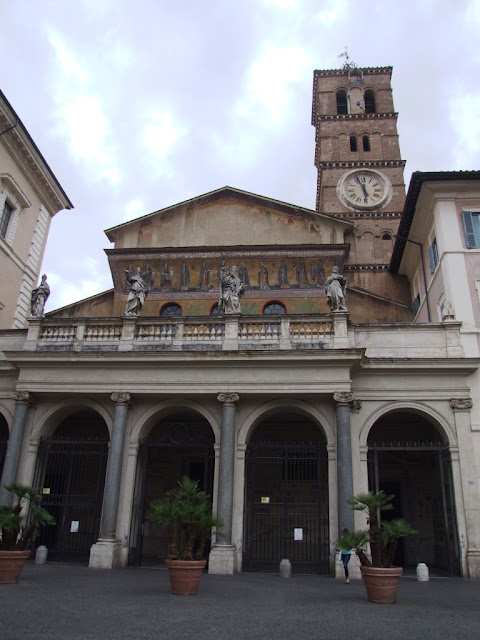 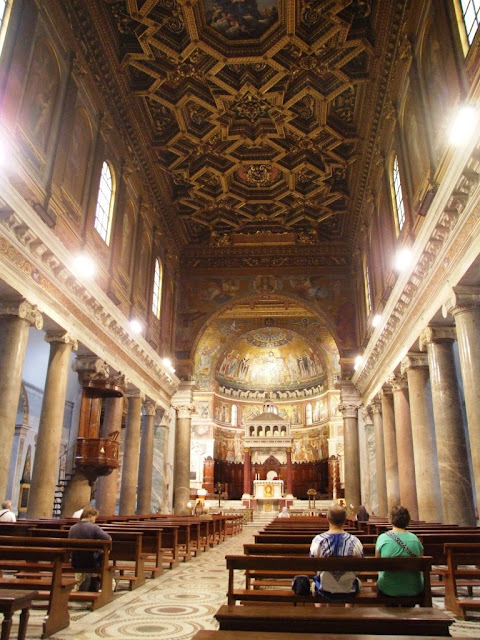 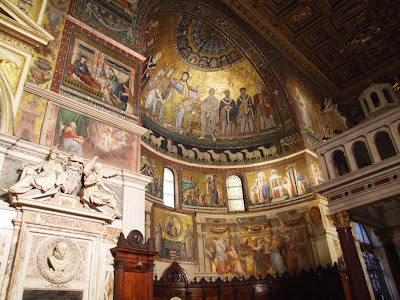 ﻿
﻿
﻿
We did eventually make it back to our hostel for a few hours sleep before we were up and at it again for day two. This was our 28th Anniversary so Rob had a couple of special things arranged to celebrate the day in appropriate style.
﻿ 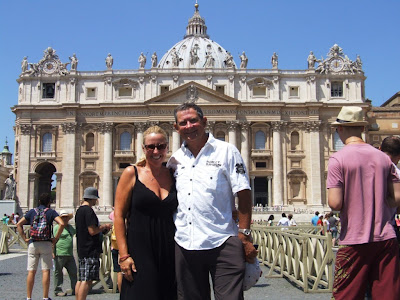 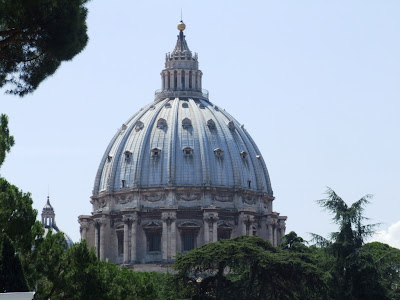 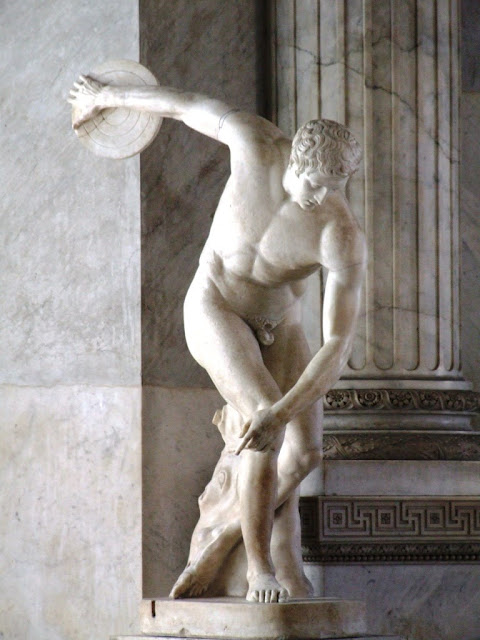 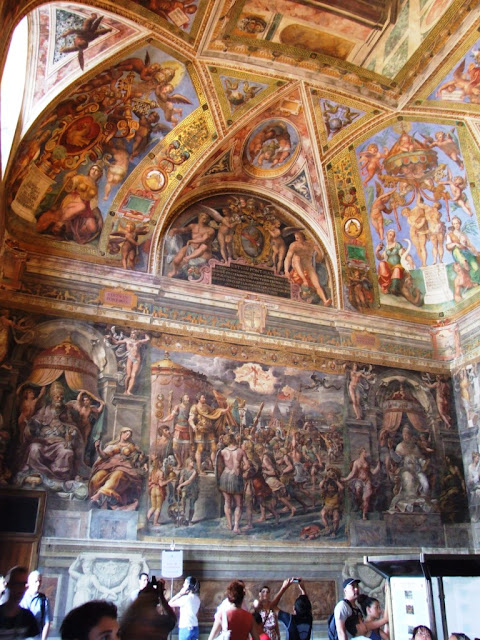 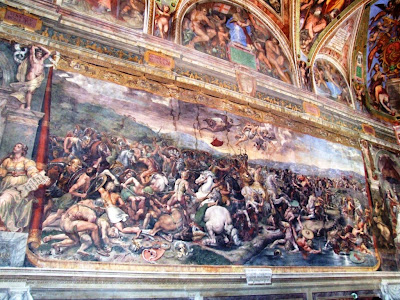 ﻿
﻿
After about an hour and a half we finally made it into the Sistine Chapel itself. What an amazing experience. The scope and detail of Michelangelo's work is truly breathtaking. While the chapel was extremely crowded we were lucky enough to score a couple of bench seats by the wall after standing for a while. We then sat for almost an hour just trying to soak it all in. It really is hard to know just where to look.  Karen was so moved she literally had tears in her eyes. It will certainly be an anniversary we'll remember for a long, long time.
﻿
﻿
﻿ 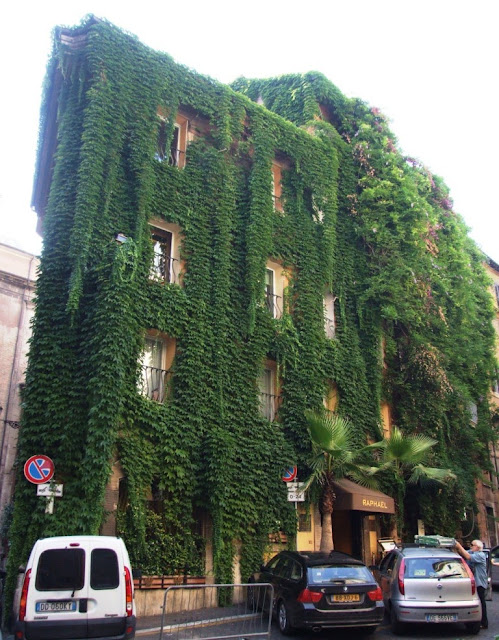 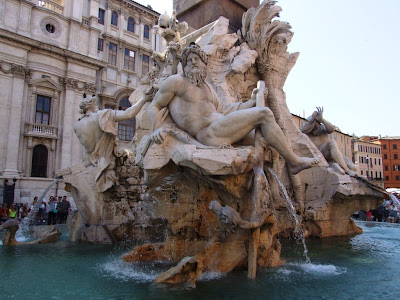 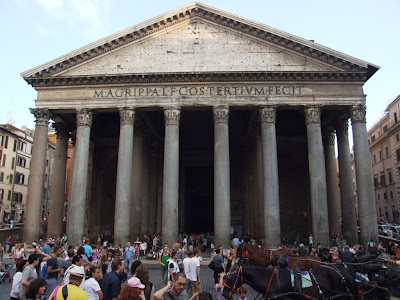 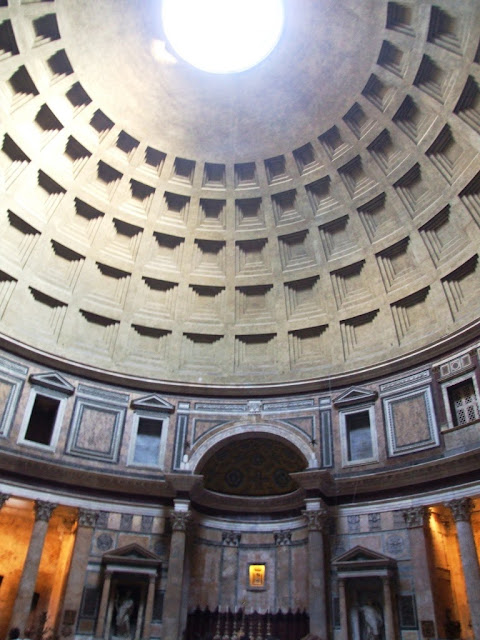 The Pantheon building is circular with a portico of large granite Corinthian columns. A rectangular vestibule links the porch to the rotunda, which is under a coffered concrete dome with a central opening to the sky. Almost two thousand years after it was built, the Pantheon's dome is still the world's largest unreinforced concrete dome. The height to the opening and the diameter of the interior circle are the same, 43.3 metres. It is one of the best-preserved of all Roman buildings. It has been in continuous use throughout its history.
﻿ 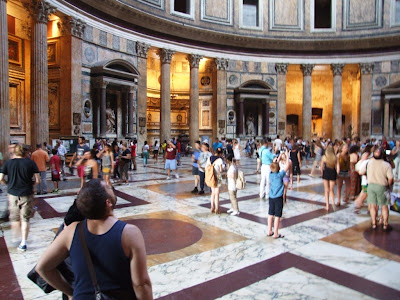 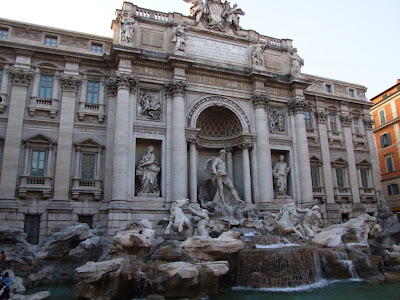 A traditional legend holds that if visitors throw a coin into the fountain, they are ensured a return to Rome. If it’s true we’ll be going back to Rome someday. Coins are purportedly meant to be thrown using the right hand over the left shoulder. An estimated 3,000 Euros are thrown into the fountain each day. The money has been used to subsidize a supermarket for Rome's needy, however, there are regular attempts to steal coins from the fountain. 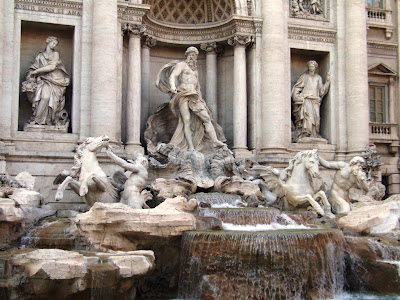 ﻿
﻿
﻿
While we checked out of our room early the next day we were fortunate to be able to leave our backpacks there while we spent a bit more time crossing another couple of 'must do' items of our Rome list. We had booked tickets online to see the Galleria Borghese which houses a substantial part of the Borghese collection of paintings, sculpture and antiquities, begun by Cardinal Scipione Borghese, the nephew of Pope Paul V (reign 1605–1621).