Isola di Giglio and the wreck of the Costa Concordia


We raised the anchor a little before eight for our passage from Elba across to the island of Giglio, a little under 40 nautical miles to the south east of Elba. There was no point in leaving any earlier as the wind was not predicted to strengthen enough to sail until a bit later in the morning so we motored out to the cape on the south east corner of the island to pick up the first of the breeze.
Striking out for Giglio we had to head 25 to 30 degrees south of the rum line to fill the sails but by late morning the wind began playing the game and we were able to adjust our course for a direct run to the northern tip of the island. The water around Giglio is quite deep virtually all the way to the shore in most areas but with a couple of off lying shoals. We noted one, small rocky shoal on the chart located off the north eastern tip. At 10 metres there would be more than enough water for us to sail right over the top but these pinnacles of rock that climb straight up from the bottom a hundred metres below have a habit of throwing up some odd waves so we elected to keep well clear anyway.
We’d no sooner cleared the shoal and rounded the tip of the island than a picture of absolute devastation came into view. We hadn’t realised this was the location of the wreck of the cruise liner Costa Concordia. There she lay on her side, against the shore ahead of us surrounded by huge cranes. She was a very sad sight, with her once gleaming superstructure now rust streaked and her exposed lower hull displaying the long, jagged 50 metre wound torn in her steel that allowed the cold, winter waters of the Mediterranean to flood her so quickly. 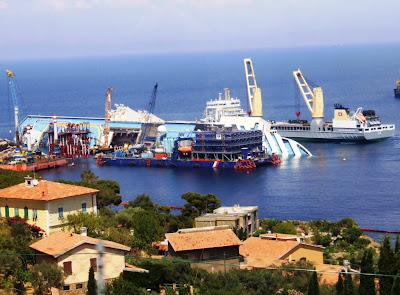 The ship is perched on a narrow ledge rocks just outside the small harbour of Porto del Giglio. If she was too slide off the ledge she’d disappear quickly as the bottom slopes steeply down to depths of 40 and 50 metres. Sailing by, we could now understand the complexity of the salvage operation which eight months after the tragedy was still far from over and not assured of a successful outcome. The hardest thing to understand was how the accident happened in the first place. The shoals are clearly shown on all charts  and avoiding them is hardly rocket science.


We continued south past the harbour to anchor in the bay at Cala Canelle over the point from the township. Here we found a number of boats lying at anchor and it took a bit of exploration before we found a patch of sand at a reasonable depth to drop our 20kg Bruce and all the chain we had. Even then we didn’t feel all that secure as the offshore breeze was a reasonably brisk 15+ knots and the bottom sloped away to over 60 metres fairly quickly. A little before sundown a couple of the boats sitting in shallower water to our north weighed anchor to return to their moorings in the harbour so we took the opportunity to pull everything up and re-anchor in a much safer spot. As usual, Rob put on the snorkelling gear and had a good look making sure the anchor was well set and checked for any possible hazards within our swing arc. To be honest, while it is listed in the pilot guide as a reasonable yacht anchorage, Cala Canelle has very limited space in under 20 metres of water close to the shore and we were very relieved to have been able to stake our claim in the middle of the best of it. We watched a number of boats spend upwards of an hour trying to get securely anchored in the deeper parts of the bay and still a number dragged loose.

﻿
Next morning Rob got back in the water again and made sure the anchor hadn’t moved overnight and well satisfied the boat was nice and safe we headed ashore to explore the port and the very interesting Castillo on the mountain top above we’d spied from the sea.
Walking around the harbour front you can’t help noticing how the presence of the  Costa Concordia  just a couple of hundred metres away and its attending salvage fleet totally dominate the scene. Stopping by the memorial containing the 32 names of those that lost their lives in the disaster further emphasises the pall that the ship’s presence casts over the island. Considering there had been 4,252 people aboard the toll could have been mind numbing but any loss is one too many. Rather than seeing the wreck as a tourist draw, the locals can’t wait for it to be gone and the island’s undoubted natural charm to be restored as THE reason for visiting Giglio. 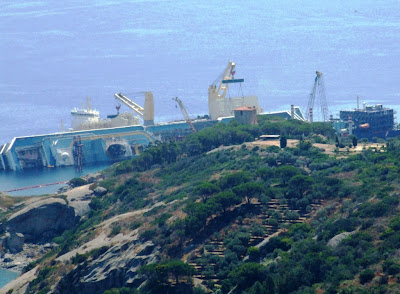 The idea of walking up to the mountain top Castello never really got off the ground in the 40C heat so we parted with 15 Euro for a ride up to the top in an air conditioned cab. Thankfully it was a little cooler exploring the delightful narrow, cobblestone laneways of the old fortified township. Once you make your way through the town gate this is a totally pedestrian community. Only the electricity cables slung precariously from building to building and a small handful of tourist shops inside the entrance provide concrete signs of the 21st century. The defensive walls and all the homes and buildings within are incredibly well preserved and the lack of crowds made our visit a very enjoyable experience. It was a very relaxing couple of hours wandering the maze of alleys and the opportunity to sample some of the excellent local wines was an added bonus. 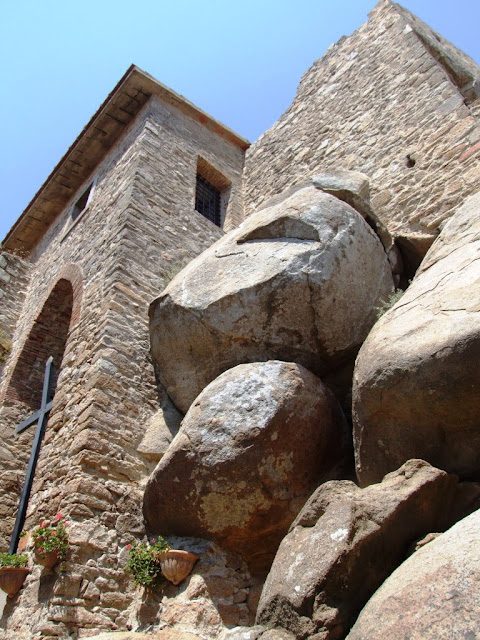 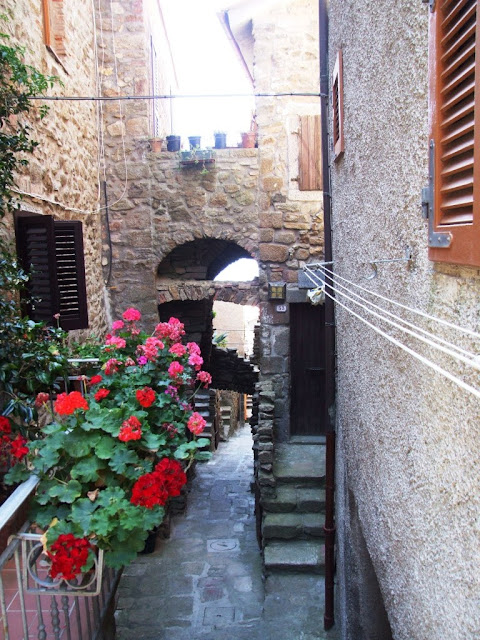 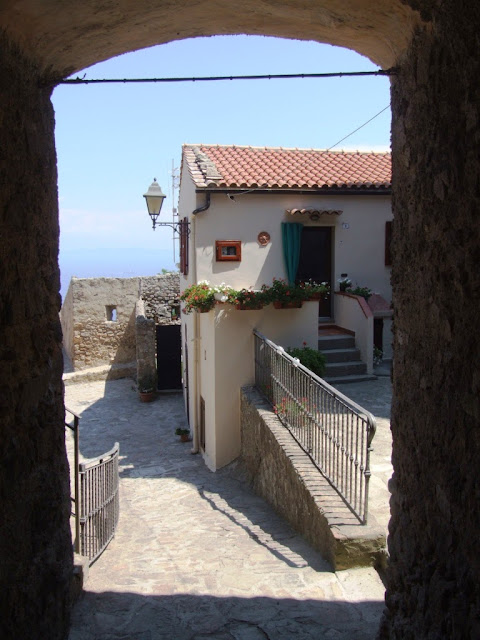 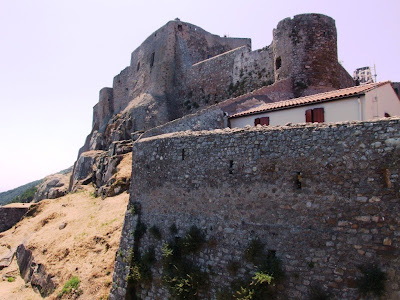 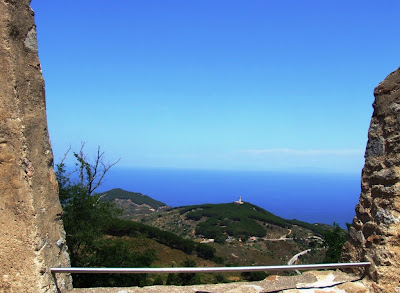 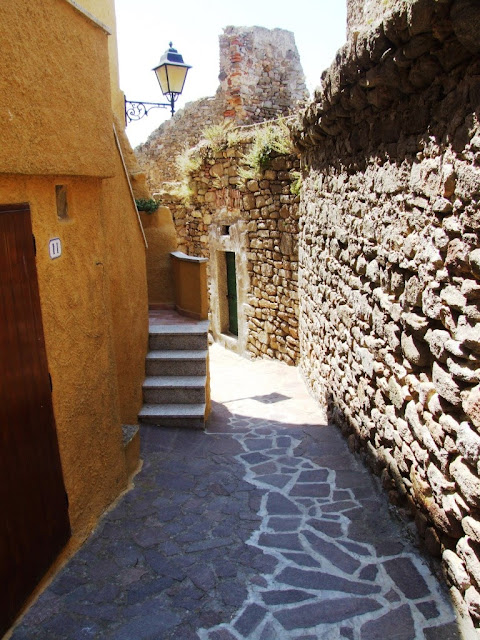 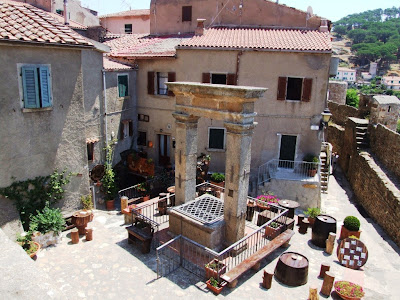 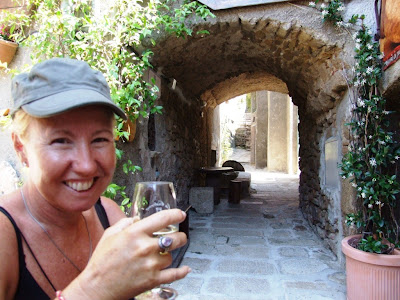 ﻿ A refreshing swim back off the boat, BBQ dinner and a bottle of bubbles at sunset closed out a glorious day on Isola del Giglio.


If you have only recently discovered our blog and would like to read how it all started, or work through our previous adventures, click the link to go back to our first blog entry. Stuff it! Let's just go sailing anyway.We hope you enjoy reading the previous posts to catch up on our story.