A very moving stop off the beaches of Anzio

July 23-24, 2013
﻿
We slipped the lines and left our berth in Porto Roma Marina a little before 11.00am and made our way to the fuel dock to fill our tank for our journey down the southern coast of Italy. The later departure was timed to hopefully take advantage of the stronger breezes in the afternoon but as we motored out through the breakwaters there was still no sign of any wind at all. Fortunately the breeze did come in around One and we were able to get the mainsail up, genoa out and finally silence the engine for a relaxing sail along the low coastline towards our destination at Anzio.

Once again we had an option of anchoring just outside the harbour if conditions were right or taking shelter inside if need be. As it turned out the mild north westerly blowing made the anchoring option very viable and we were able to creep into close to the breakwater and anchor in quite shallow but nicely protected water just off the beaches that runs from Anzio down to Nettuno just to the south.

﻿
We were aware that these beaches were made infamous in World War Two as the site of major Allied landings which led to the Battle of Anzio but weren’t aware of the full story. As we enjoyed post passage sundowner drinks in the cockpit, a quick visit to Google revealed the full story.
Operation Shingle was an launched in January 1944 commanded by American Major General John Lucas. It was intended to outflank German forces of the Winter Line and enable an attack on Rome. The success of the landings around Anzio, in a basin consisting substantially of reclaimed marshland and surrounded by mountains, depended completely on the element of surprise and the swiftness with which the invaders could move relative to the reaction time of the defenders. Any delay could result in the occupation of the mountains by the defenders and the consequent entrapment of the invaders. Lieutenant General Mark Clark, commander of the U.S. Fifth Army, understood that risk, but Clark did not pass on his appreciation of the situation to his subordinate, General Lucas, who preferred to take time to entrench against an expected counterattack. The initial landing achieved complete surprise with no opposition and a jeep patrol even made it as far as the outskirts of Rome. Despite that report, Lucas, who had little confidence in the operation as planned, failed to capitalize on the element of surprise by delaying his advance until he judged his position was sufficiently consolidated and his troops ready.

While Lucas consolidated, the German commander in the Italian theatre, Field Marshal Albert Kesselring, moved every spare unit to be found into a ring around the beachhead, where his gunners had a clear view of every Allied position. The Germans also stopped the drainage pumps and flooded the reclaimed marsh with salt water, planning to entrap the Allies and destroy them by epidemic. For weeks a rain of shells fell on the beach, the marsh, the harbour, and on anything else observable from the hills, with little distinction between forward and rear positions.

After a month of heavy but inconclusive fighting, Lucas was relieved and sent home, replaced by Major General Lucian Truscott. The Allies finally broke out in May, but instead of striking inland to cut lines of communication of the German Tenth Army's units at Cassino, Truscott, on Clark's orders, reluctantly turned his forces north-west towards Rome which was captured on 4 June. As a result, the forces of the German Tenth Army at Cassino were able to withdraw and re-join the rest of Kesselring's forces north of Rome, regroup, and make a fighting withdrawal to his next major prepared defensive position on the Gothic Line. 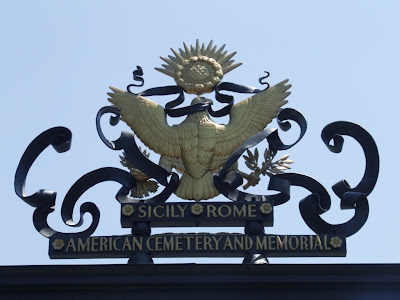 Our Google research also revealed the a large American war cemetery was located just inland from Nettuno so we decided it would be our next day’s destination. In the morning we motored the three of four kilometres south along the beaches where we re-anchored outside the new marina at Nettuno and took the dingy ashore. We skirted around the old walled town and headed a couple of kilometres inland to the cemetery. Our journey through Nettuno had been all passing traffic, with our path all concrete and bitumen which reflected the fierce Italian summer heat, quickly sapping our energy and making our walk less than pleasant. When we made our way through the gates of the Sicily-Rome American Cemetery and Memorial we entered into a lush green world where the ambient temperature dropped noticeably and the noise of the busy city outside seemed to fade away into a reverent near silence. 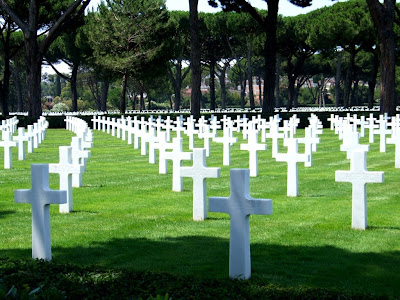 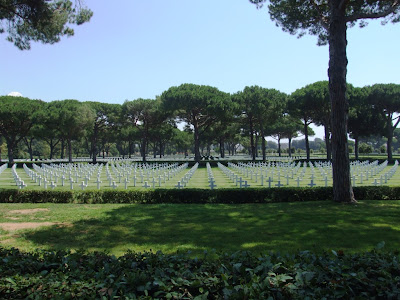 The World War II American Cemetery and Memorial site covers 77 acres, rising in a gentle slope from a broad pool with an island and cenotaph flanked by groups of Italian cypress trees. Beyond the pool is the immense field of headstones of 7,861 of American military war dead, arranged in gentle arcs on broad green lawns beneath rows of Roman pines. The majority of these men died in the liberation of Sicily, in the landings in the Salerno area and the subsequent heavy fighting northward, in the landings at Anzio Beach and expansion of the beachhead as well as in air and naval support in the regions.

A wide central mall leads to the memorial, rich in works of art and architecture, expressing America's remembrance of the dead. On the white marble walls of the chapel are engraved the names of 3,095 of the missing. Rosettes mark the names of those since recovered and identified. The map room contains a bronze relief map and four fresco maps depicting the military operations in Sicily and Italy. At each end of the memorial are ornamental Italian gardens. Wandering through reading names on gleaming white marble headstones recording the final resting place of so many young man was incredibly moving. Looking across the row upon row of these silent sentinels not only brought home the horrific reality of war but also made us thankful that the changing nature of the armed conflicts that our country has been involved in during our lifetime have not resulted in losses of this magnitude. 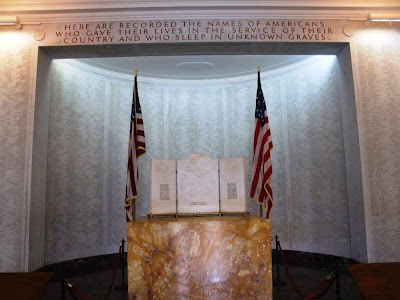 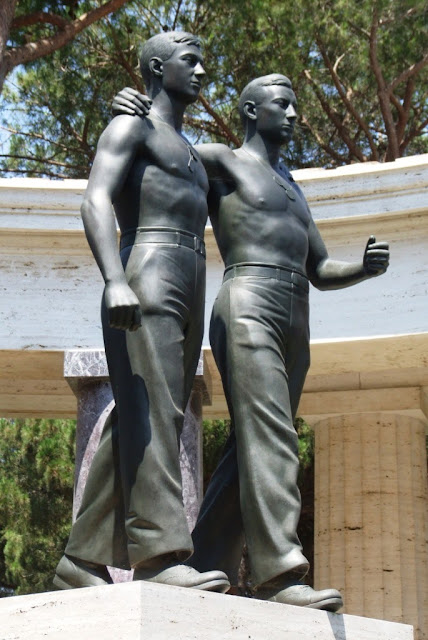 We were both fairly subdued during our walk back to the old town area of Nettuno where we explored the medieval streets and enjoyed a light lunch in one of the cafes. 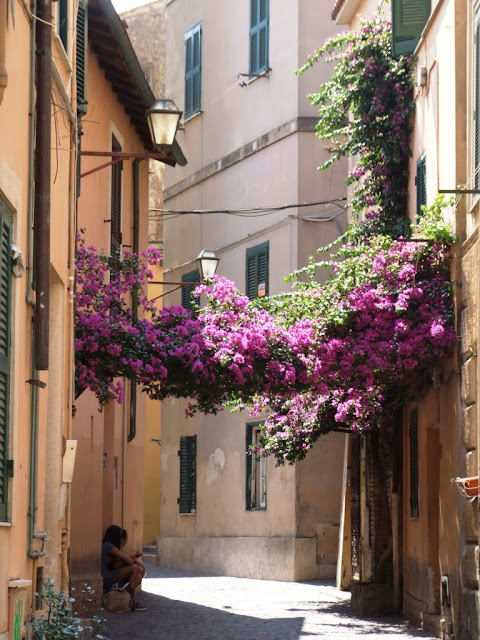 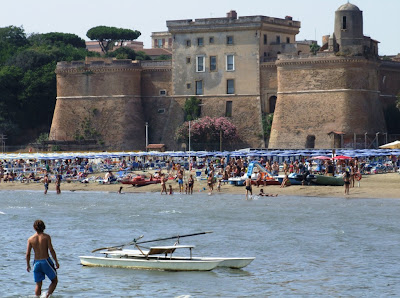 Returning to the boat we found a reasonable sized swell now rolling in making things a little uncomfortable so we upped anchor and returned to the shelter of our previous night’s spot in behind the Anzio harbour walls. A little later, we were treated to yet another colour packed sunset silhouetting the buildings of Anzio as we planned our next day’s journey further down the coast.