(Part One) Two Days to see Florence – a definition of totally inadequate.


After spending a day exploring bits of Pisa we caught a late afternoon train to Florence where we’d booked three night’s accommodation. This would provide us two very full days to have a look at the art and cultural wonders of the birthplace of the Renaissance.


We had been able to find a very reasonably priced budget hotel through a website we have used a lot throughout our travels called ‘Hostel Bookers’. While price is the number one consideration, we always look for a place that is well located within walking distance of the main places we want to see. Hostel Bookers provide the opportunity for guests to review their stay in accommodation houses and we always look through as many of these reviews as possible when choosing a place stay. Seeing we travel in foreign countries where we don’t speak the language, reviews that mention friendly, multi-lingual staff who can provide local advice always rate highly with us.

﻿
The reviews of the  Hotel Benvenuti  ticked all our boxes. It was even located on the same street as the Church of Santa Maria del Fiore, better known as the Cathedral of Florence or Duomo.


On arrival at the station in Florence, we were feeling a little weary after having walked all over Pisa lugging our backpacks. It’s amazing how such small backpacks seem to gain ten kilos in weight through the course of the day. We considered finding a taxi to take us to our Hotel but as the street was only three or four blocks away we decided we really needed to harden up and walk it. Despite being early evening the sun was still blazing and the temperature well into the thirties. They were loooonnnngggg blocks and when we reached the street ‘Via Cavour’, we realised we were at the start of it. Hotel Benvenuti is number 112, another five loooonnnngggg blocks away. Fortunately the Hotel and its staff lived up to all of its reviews. At check in, Ronaldo, immediately asked if we’d been to Florence before and as soon as they knew we were first timers, out came a map and in five or six minutes we obtained the very best advice you could possibly ask for. Starting with a short list of good places to eat.

After a refreshing shower and short relax we made our way to the closest of the recommended Trattorias, Tito’s on the next street. We knew we were in for genuine local fare when the sign at the door said ‘Cappuccino 5000Euro – Cappucino with well done steak 10,000Euro.’ Cappuccino is ONLY a breakfast drink in Italy and Tito’s is not open for breakfast so they will not serve it. Traditionally in Florence beef is cooked rare or, at the most, medium rare and that’s the only way they’ll cook it. The right way.   If that’s not for you, simple, find somewhere else. Their front door sign was also an indication of the sense of fun that pervades the restaurant. Staff uniforms are interesting to say the least. The wait staff laugh and joke in seemingly whatever language is required by the client. This could be fuelled by the seemingly endless toasts they share through the evening. A visit to the bathroom is an experience in itself. Tito’s has been going since 1913 so we don’t guess they’ll change a winning formula anytime soon. 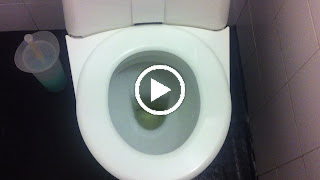 Apologies to Apple users who may not be able to see this video.
Get on to a PC. This absolutely freaked us out.
What can we say about the food? Rob had the best, melt in your mouth steak he can remember ever eating anywhere, Karen had a chicken salad that was fresh as the morning, extremely flavoursome and huge. We washed those down with one and a half litres of excellent Tuscan Chianti Classica, followed by wild berries pennecota desert and espressos with the total bill coming in under Fifty Euro.  Superb.

Even at this good value we normally try to find cheaper, less fancy meals than this to stretch our budget, but we were following the excellent advice of our good friend Trish, who says everyone needs a ‘Sod It’ day every now and then to just splash out. We certainly won’t argue. In fact we were so impressed with Tito’s we tried to say ‘Sod It’ again two nights later but were turned away with the house full sign up.


Despite both being extremely tired after quite an active day, getting to sleep proved a little more difficult than we’d anticipated. The bed wasn’t moving. This was the first night we’d slept off the boat since we’d left Palma on Mallorca for the final time 268 days previously. It was a strange sensation for us.

Now what can we say about our two days in Florence. Simple. ‘Were we mad?’ It is simply not possible to scratch more than the surface of all the treasures this incredible city contains in two days, although we gave it a good shot. We walked and walked and ogled and ogled.
DAY ONE:  We made use of one of Rick Steve’s walking tours downloadable free from the internet which provided a great commentary via the I-Pad as we made our way around a number of key sites. We began with  slow walk around the Duomo or Cathedral of Florence trying to take in the endless detail contained in and on the exterior walls of this huge marble cathedral and its massive dome. Then join the hordes moving through the interior which is comparatively minimalist compared to the others such as Pisa or the most incredible we’ve seen, Malta.
Next we did a circuit of the Baptistry and marvelled at the intricacy of the huge, bronze doors before making our way to the Plazza del Republica and then further down the street noting particular buildings and their place in Florence’s history. This included an old grain warehouse that had been very cleverly converted into a magnificent church, Orsam Michele. Rick just had to talk about Florence being home to some of the best handmade gelato ice-cream in the world. Of course we had to make a stop to test his theory and both agreed that he’s probably right. 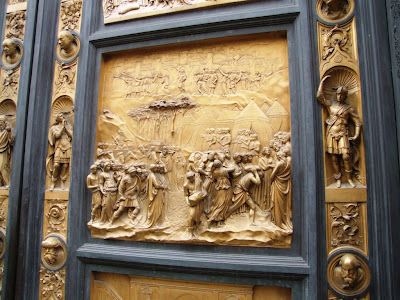 Next port of call was the Piazza della Signoria and the Palazzo Vecchio which had been the seat of local government until the massively wealthy and influential Medici family decided it would better serve as their own palace instead and took it over. The Loggia dei Lanzi area outside the Palzzio previously dedicated as a forum for free speech by citizens but the Medecis thought that a waste of space and turned it into an open air sculpture gallery and commissioned magnificent works by many of the masters. The influence of this family in Florence’s cannot be over stated. Would you believe Michelangelo’s statue of David was originally intended to sit atop the dome of the cathedral as its crowning glory but got hijacked to stand at the steps of the Medecis’ Palazzio. Here it stood in the weather until an arm got broken off during a riot and it was moved to a museum for safety. A very poor copy now takes its place at the stairs.


Onwards we walked along the banks of the River Arno to the Ponte Vecchio (Old Bridge) lined with goldsmith and jewellers stores.


By then it was time to grab a quick bite of late lunch and then make our way back to the Galleria dell Accademia, the home of Michelangelo’s statue of David and a number of his unfinished works referred to as the prisoners because they haven’t escaped the block of marble that still partially encases them.


This was another instance when Ronaldo’s local knowledge paid big dividends. On his advice we had got him to pre-book reserved entry to the gallery for us which meant we arrived five minutes before our allotted time of 3.30pm and virtually walked straight in while the regular cue snaked its way around the block requiring over an hour’s wait.


The centre piece of the gallery is of course the statue of David set in pose where he’s eyeing off Goliath with his sling over his shoulder before their legendary battle. It is much larger than we’d realised and truly magnificent. While still only in his twenties, Michelangelo truly breathed warmth and life into a huge block of solid, cold white marble. No photo can capture what the eye sees when gazing on this genuine masterpiece of artistic creation. Seeing a number of unfinished works really provided an insight into how Michelangelo worked and made the completed statue of David even more awe inspiring.


After a late diner in one of the scores of sidewalk cafes found in almost every street we flopped into bed totally exhausted and recharged the batteries to do it all again the next day. We were in for an early start as we had 9.15am reserved entry into the Galleria degli Ufizi, to view the largest art collection in Florence ranging from medieval religious works to some of the world’s most famous art from the renaissance and beyond including works by Di Vinci, Michelangelo, Rubens, Raphael, Caravaggio and is the home of  Botticelli’s Birth of Venus.


If you only recently discovered our blog and would like to read how it all started, click the link to go back to our first blog entry. Stuff it. Let's just go sailing anyway We hope you enjoy reading the previous posts to catch up on our story.