Day Two: After a huge first day in Florence, our second day actually started earlier than we planned as a very early morning text message from our daughter Yasmin informed us that our fifth grandchild had just arrived back in Australia. Harry James Chrzescijanski was born 2.11PM Eastern Australian time at 8lb 5oz and within an hour of his birth we were introduced to our newest grandson via Skype. It certainly wasn’t anything like being there for Nanny and Poppy cuddles but it was still fantastic to be able to see the new bub and share an hour or so via computer screen with Yasmin, her husband, Rob, and a very impressed big sister to Harry, two year old Lyla. Rob’s father’s name was Harry, so he was particularly moved regarding Yasmin and Rob’s choice of name.


﻿﻿
﻿
Of course by the time we got over all the excitement our Gallery booking had come and gone so we grabbed some breakfast and by late morning were headed for the next must do on our list instead. Founded in 1294, the Basilica of Santa Groce is one of the finest Gothic churches in Italy. It also rivals the Duomo in size. We expected to breeze through it in half an hour or so but we were soon to find out we seriously underestimated how much there was to see. It is impossible to list the masterpieces which are housed within Santa Groce’s walls. It is also the burial place of such luminaries as Michelangelo, Galileo, Machiavelli and Rossini along with many other important historical identities from Florence and other parts of Italy.  Each tomb along the main walls of the Basilica features magnificent Funerary Monuments created by the outstanding sculptors of the day. Despite not actually being buried in the church, equally impressive monuments are included for Leonardo Di Vinci, the writer Dante, inventor Marconi and a number of others.  No doubt the city fathers felt these famous Italians should also be spending their eternal rest here in Florence.

Sante Groce also has a number of alcove like chapels that were sponsored by the wealthiest and most influential Florentine families who spent large fortunes commissioning incredible frescos, sculptures and other artworks to decorate their chapel in an effort to outdo all the others. All in God’s glory of course. Nothing to do with ego at all. The end result though is incredible and has to be seen to be believed. Then there is the sacristy where the clergy dress for mass surrounded by more priceless art and ornate decoration. Oh and there’s the cloisters with more of the same, and the storerooms which are now a museum. These were once packed with all sorts of art treasures that fell from favour for whatever reason and were stored away while there place inside the church was taken by some new masterpiece.

﻿
﻿
While the exterior of the Santa Maria del Fiore or Duomo (Cathedral of Florence) is truly breathtaking the interior is fairly plain and fifteen minutes is plenty enough time to spend inside. Sante Groce Basilica on the other hand is a place you need to allow yourself plenty of time to do it any justice at all. We spent three hours there and thoroughly enjoyed every bit of it, particularly with the aid of the self guided audio tour that provided the history of not only the church but also over eighty points of interest within. 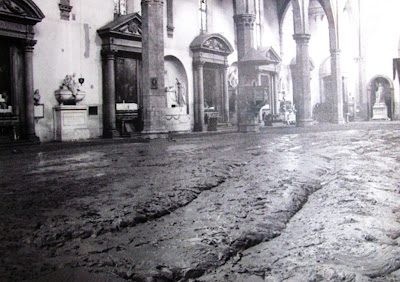 By the time we’d wandered a few streets unsuccessfully looking for a reputedly very impressive library building designed by Michelangelo with an amazing set of steps, given up and made a café stop for a bite to eat it was near Four PM. As we’d missed our 9.15am reserved entry into the Galleria degli Ufizi, we gambled that maybe the line up may have thinned at little by late afternoon so made our way to the impressive building that houses the collection to join the back of the cue. Despite the lateness of the hour it still took fifty minutes before we made it through the doors, metal detector and cloakroom to check in our backpack and with Rob’s camera.


The Uffizi building was originally designed as administrative offices in the 1500s but the all powerful Medici family gradually used more and more of it to store and display their ever growing collection of artworks. The last Medici heiress negotiated for it to become one of the first modern museums.  Opened to the public in 1765 the Uffizi is one of the oldest and most famous art museums in the world with works dating back almost 1,000 years.


﻿
Once more we made use of one of Rick Steve's free audio tours  which explained the history and features of the most important paintings and sculptures spread through almost 50 rooms in the magnificent building. These included Botticelli’s Primavera and Birth of Venus, da Vinci’s The Annunciation and Adoration of the Magi, Michelangelo’s Doni Tondo, Raphael’s Madona of the Goldfinch, Titian’s Venus of Urbino , Carravaggio’s Bachus and Sacrifice of Isaac and a couple of Rembrandt’s self portraits to name just a handful of the most famous. Because the museum closes at 6.30pm and we didn’t begin to make our way through until Five our visit was a little rushed but it was still an incredible experience to see the works of so many masters in one place. It was extremely impressive to say the least. Under normal circumstances you could easily spend hours wandering the halls and different rooms of this incredible building.

﻿
﻿
﻿
﻿
﻿
﻿
We made the most of the two hours or so of daylight remaining and ambled around a number of the streets of the old areas of Florence simply finding what was to be found and enjoying no longer having a plan or schedule. After a quiet dinner two exhausted sailors flopped into bed trying to work out what made us ever think we could ‘do’ Florence in two days.


If you only recently discovered our blog and would like to read how it all started, click the link to go back to our first blog entry. Stuff it. Let's just go sailing anyway! We hope you enjoy reading the previous posts to catch up on our story.