Sailing down the Italian Coast


Livorno had been our original landfall on Italy and after using it as a base to visit Tuscany and then returning here to shelter from some nasty weather after our trip north we were finally turning our bow southwards towards what were reputed to be great cruising grounds. 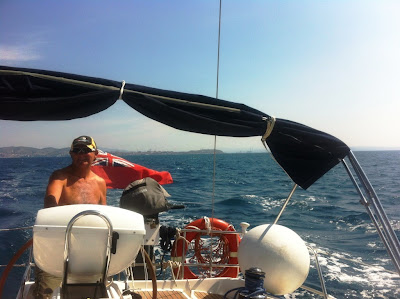 ﻿
The strong winds were gone and in their place we now had just a gentle breeze leaving us with almost forty miles of motor-sailing along the coast to a marina at Livorno. Irritatingly, the bay just outside the marina was beautifully protected from the prevailing winds and would have been a great place to anchor off, BUT, funnily enough the area was declared a marine protection zone soon after the marina was built and anchoring is now illegal. With no shelter from the prevailing north westerly winds anywhere else along this section we guess it was fortuitous rezoning for the marina who were now collecting 50 Euro a day from us for our berth.
Marc was heading to Rome to meet up with his friend Caroline from the UK in a few days so with a train station not too far away we elected to stay until then. It gave us a chance to get some boat jobs and maintenance such as an oil change done on the first day. We spent a day exploring nearby Piombino and enjoyed wandering around the towns old castle and buildings around its waterfront. 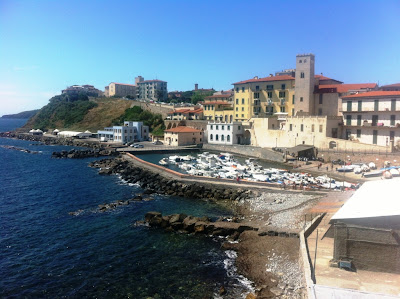 ﻿
The two of us spent the following day in very indulgent fashion doing very little at all. We took our books and headed over the headland to a delightful little bay with a small rocky beach backed by a nice café. Italian style, we hired a sun bed and umbrella each and apart from a break for lunch and a bottle of vino, we spent the entire day reading and watching the world go by.
Marc was up very early and headed for the station as the sun came up for his trip down to Rome. He and Caroline spending a couple of nights in the city before coming back to the boat so rather than waste money and risk an overdose of boredom sitting in the marina, we headed across to a bay on the nearby island of Elba. We had a great sail but this particular patch of water has more large ferry traffic than anywhere we’ve been so far. Our AIS was constantly sounding its alarm as ferry after ferry left or entered the port at Piona with no ferry free interval longer than fifteen minutes. Forget power giving way to sail. These guys do not deviate a meter off course and certainly do not reduce speed for anyone. Best practice is just to stay the hell out of their way. Our destination of Golfo di Stella is a huge gulf on the southern coast of the island well protected from the 15 to 20 knot north westerlies blowing down off the mountains.

﻿
﻿
We spent the first night in a recommended anchorage Anse di Margidore in the north west corner of the gulf but moved around the point early the next morning to a very picturesque small bay with a beach bordered on all sides by high cliffs. Despite its only access being via a rather precarious path down the cliff face, it was fairly popular with the local sun lovers. The water was beautifully clear and provided great snorkelling. Much nicer than sitting in the marina. 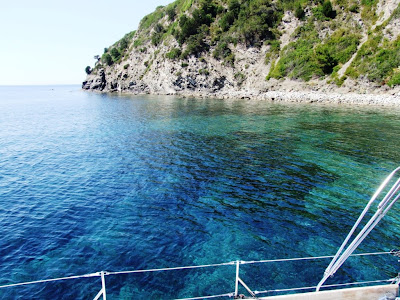 ﻿
The following morning we upped anchor for our return trip to Salivoli. Our day started with absolutely no wind and glassy seas but shortly after rounding Punta dei Ripalti on Elba’s south east corner a mild breeze began to appear. We hoisted the asymmetric and enjoyed a very leisurely downwind sail back across the bay, other than stressing about the scores of ferries doing their best to run us down and spoil our day.

﻿
﻿
﻿
﻿
﻿
We moored back in the now 75 Euro an night marina as the rate goes up 50% in July and August for peak season where Marc and Caroline joined us in the early evening after their train adventure from Rome. Next morning would be occupied by a trip to the supermarket to stock the boat up well with provisions for the next week or so then it would be back to Elba to explore the island properly. 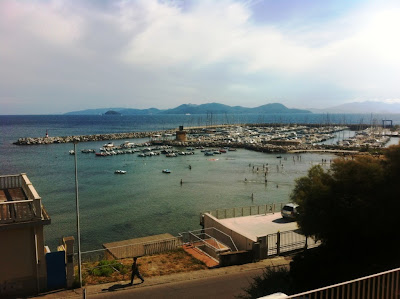 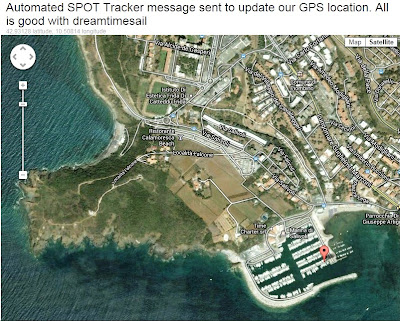 Salivoli is a reasonably new marina and offers good protection from most weather. It is well filled with local boats but has a small number of guest berths. Fuel dock on site, small but well stocked and very helpful chandlery is located in the marina. Even camping gaz was available. A café and bar is also onsite with more cafes adjacent to the marina at the beach.  Bathroom facilities modern and clean. Shower is operated by tokens available from vending machine for 1 Euro. A real bonus was free ice from an ice machine located under the control tower near the marina entrance. (G&Ts for sundowners.) A large COOP supermarket is about two kilometres from the marina.


We found NO WiFi available in the vicinity of the marina at all. For the price we would expect marina provided WiFi but not even the café’s had it.


If you only recently discovered our blog and would like to read how it all started, click the link to go back to our first blog entry.Stuff it. Let's just go sailing anyway! We hope you enjoy reading the previous posts to catch up on our story.