We were all excited about crossing to the Italian mainland and beginning the next leg of our travels along the west coast of the big boot. Our initial destination was 36 nautical miles away at a marina in the busy port of Livorno in Tuscany. From here we could take off inland to explore Pisa, Florence, Siena and the countryside between.

With a good wind forecast we were looking forward to a nice sail across from Isola Capraia and got underway reasonably early. We raised the full mainsail while still in the smooth waters of the large harbour, unfurled the genoa and set our course for Italy. A warm sun was shining down on us as we sailed out through the headlands and nothing could be better. Funny how you get conned by nature sometimes.
As we moved further from the shelter of the island, the wind strength kept growing and was soon past the forecast maximums. The old saying is when you first start thinking about reducing sail it’s time to do it. So rather than delay, we pointed up into the wind and pulled the main down to the first reefing point. It proved to be a good call as within minutes we were experiencing gusts over twenty knots. Alcheringa sails extremely well reefed down and we had no trouble pushing along at over seven knots.


Unfortunately with the stronger winds came cloud and without the sun to warm us up the cool breeze soon had us rugging up a bit more. Then with the cloud came the showers and before long we were all in our wet weather sailing gear too. With the wind and the rain came a bigger swell so now we were cold, wet, rocking and rolling and wondering where the hell summer had gone. Never the less we were making good time and were sailing right along the rhumb line straight towards our destination and that’s how we spent the next six hours.

Approaching Livorno with the rain limiting visibility we were again very thankful for our AIS system. It is a very busy commercial port with plenty of container ships and large ferries coming and going not to mention huge cruise ships that stop over to disgorge their thousands of punters for a one day bus tour of the sites of Tuscany. With the AIS we were able to avoid a couple of the ferries and sail through the harbour entrance confident no bad surprises were heading our way from the other side of the high breakwaters. We dropped our sails inside the protection of those big walls and made our way to the Yacht Club Livorno Marina where we tied up, tidied up and enjoyed hot showers and being warm again.
﻿


Marc had travelled through Tuscany previously so he elected to have a few days relaxing on the boat while we went into backpacker mode and found ourselves at Livorno’s main station next morning trying to make sense of the timetables on the wall, ticketing system and general mayhem going on. After a calming Cappuccino in the station café we made our way to the platform to wait for our train to Pisa. Then, thanks to the assistance of a helpful young guy with good English skills, we made our way to the correct platform to await our train thus avoiding arriving in Rome a month ahead of schedule.


The trip to Pisa only took about twenty minutes so before long we were navigating our way through the streets of this famous city with the assistance of the GPS and maps feature of Karen’s IPad. The primary destination of course was Piazza del Duomo ( Cathedral Square) home of the famous bell tower in the world, the Leaning Tower of Pisa.


While it was still both early in the day and early in the summer, the square was already quite busy with tourists all jockeying for the perfect photograph of each other either holding the tower up or pushing it over. If they realised how ridiculous they looked inching a fraction to the left, right, forward, back, with a palm in the air I’m sure they wouldn’t bother. It provided us with plenty of amusement though as we settled for the more conventional shots.


Construction of the tower occurred in three stages across 344 years. Work on the ground floor began on August 14, 1173. The tower began to sink after construction had progressed to the second floor in 1178. This was due to a mere three-metre foundation, set in weak, unstable subsoil, a design that was flawed from the beginning. Construction was subsequently halted for almost a century, because the Republic of Pisa was almost continually engaged in battles with Genoa, Lucca, and Florence. In 1272 construction resumed and in an effort to compensate for the tilt, the engineers built upper floors with one side taller than the other. Because of this, the tower is actually curved. Construction was halted again in 1284, when the Pisans were defeated by the Genoans in the Battle of Meloria.
The seventh floor was completed in 1319. There are seven bells, one for each note of the musical major scale. The largest one was installed in 1655. The bell-chamber was finally added in 1372. The total amount of years that the building of the tower took was between 185 and 195 years. 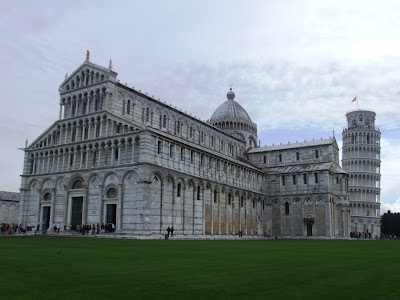 The heart of the Piazza del Duomo is the Duomo itself, the medieval cathedral. Its Construction began in 1064 and set the model for the distinctive Pisan style of architecture seen throughout the Piazza. The façade is of grey marble and white stone set with discs of coloured marble, was built by a master named Rainaldo. The massive bronze main doors replaced the original doors destroyed in a fire in 1595. 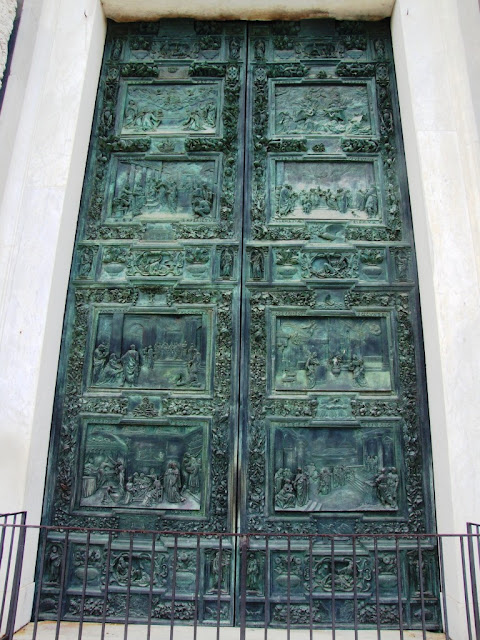 
The Duomo was fantastic to wander around soaking up the ornate marble interior and sumptuous artworks by medieval masters. Looking at some revered person’s skull in a glass case on the wall and reading the story of some of the crypts had us shaking our heads in disbelief. Even with Rob’s background as RC (Retired Catholic) we both struggled with the concept of hacking a person’s body up into pieces so ‘holly relics’ could be shared between the Vatican, various cathedrals and wealthy churches. 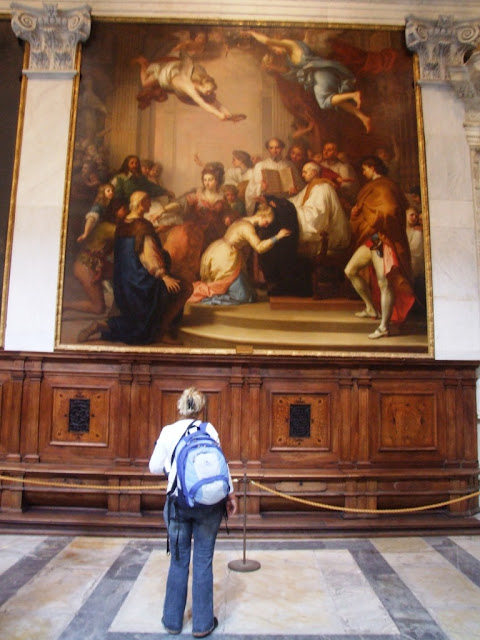 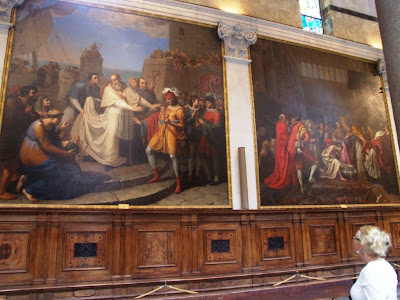 Karen of course was absolutely in her element gazing at the endless art to be found at every turn. The marble pulpit, sculptured by Giovanni Pisano is absolutely amazing. one the masterworks of medieval sculpture. It was packed away during the redecoration after the fire and not rediscovered and re-erected until 1926. 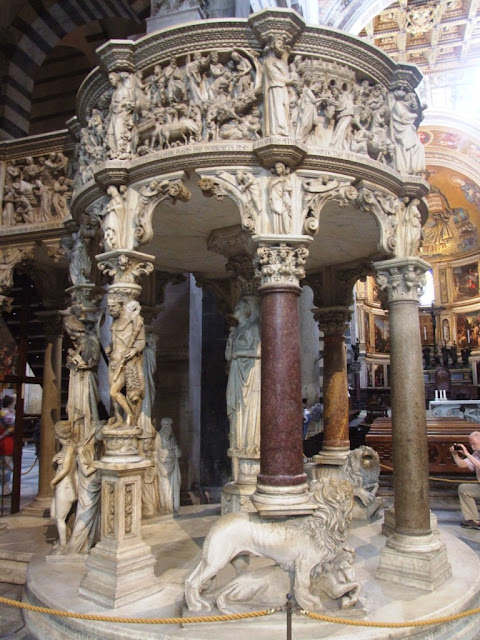 The Baptistry opposite the Duomo was also well worth spending some time in. Its construction began in 1152 and completed in 1363. Built on the same unstable sand as the Tower, the Baptistry leans 0.6 degrees toward the cathedral. The stunning pulpit was sculpted between 1255-1260 by Nicola Pisano, father of Giovanni, the artist who produced the pulpit in the Cathedral. An external roof was added later giving the shape of a cupola. As a side effect of the two roofs, the pyramidal inner one and the round external one, the interior is acoustically perfect, working the space as a resonating chamber. If you stand by the curved interior wall you can clearly hear someone whispering on the other side of the very large room. The climb up the stairs to the upper balcony provided not only great views down over the baptismal chamber, but also out through the windows to the cathedral and bell tower. 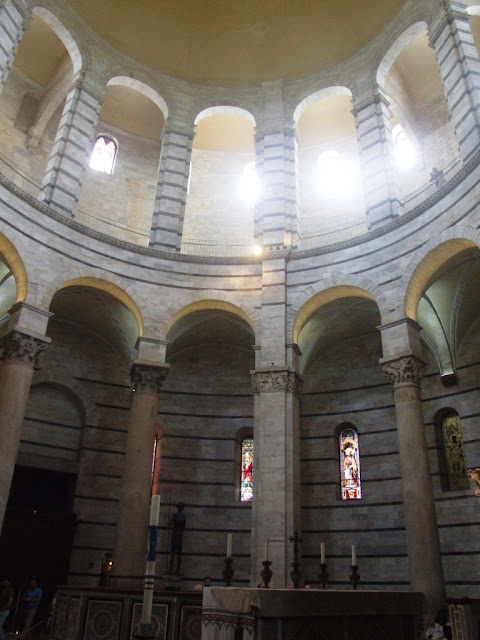 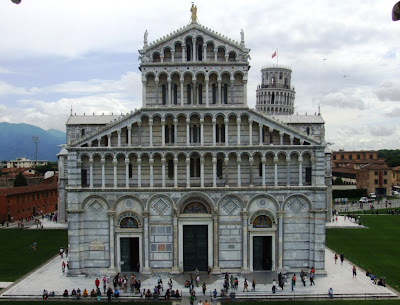 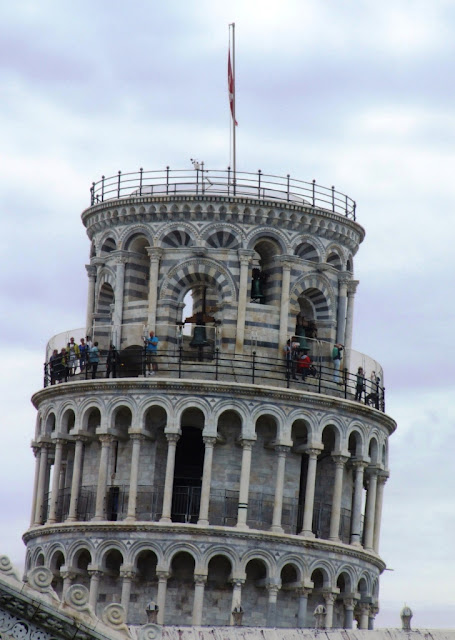 A pleasant feature of the Piazza del Duomo while we were there was the constant rumble of Harley-Davidsons echoing around the square. The European celebration of the 110th Anniversary of Harley Davidson was being held in Rome the following weekend attracting 30,000 Harley enthusiasts from all over the continent. Of course many were taking in all the tourist high spots on their way and we had the chance to chat to a number of fellow HOG (Harley Owners Group) members from all sorts of places while we wandered around.
We also explored many of the streets of the old city beyond the square and had a nice lunch of local dishes and wine at a sidewalk café. We then slowly made our way back to the station where we caught a late afternoon train onwards to Florence for the next stage of our adventures in Tuscany.