﻿
﻿
﻿Picking a departure time for the trip from Larantuka to Riung was a matter of balancing the time needed to reach our next anchorage and working around the strong tidal currents that exist in the narrows of the Flores Straight. One boat we heard from the day before got it wrong and, despite making 6 knots through the water, actually travelled half a mile backwards in an hour. Fortunately Nae Hassle has a powerful 160 horse engine so we were able to leave a little before the end of the opposing tide and still make reasonable progress giving us a good head start towards our planned anchorage at a small island off the north coast of Flores. We crew members had also taken note of which section of the narrows the local boats used against the tide when we had a nice lunch up there a few days before. By skirting the reef on the port side and staying out of the centre of the channel we avoided the worst of the currents. There were some very strong whirlpools and overfalls happening however so we were certainly on our toes until we reached open waters and headed west. Skirting the reef also proved productive and we broke our Indonesian fishing drought with a very nice Turrum landed in the narrows which was very tasty baked whole for dinner that night.
﻿
﻿ The sail was largely uneventful with light winds seeing the motor used yet again for long periods but we did get a good late afternoon seas breeze and nice sail into the island. This stop was about 15 nautical miles further than most the boats planned to go but our earlier start and good speed saw us dropping anchor in the good light needed to avoid coral reefs about 4.30pm. The anchorage was in a lovely protected bay just off a small and very traditional Muslim fishing village. Extremely picturesque and we had it all to ourselves. Very nice.

Next morning we were up early and headed for Maumere and the Sail Indonesia Rally’s planned stop at a small resort run by the Catholic Church about 14 kilometres outside the city. Maumere is the capital of Flores and provided the advantage of a good supermarket to reprovision the boats. This is also the easiest spot for cruisers to arrange a tour up to the famous Kelimutu volcano and it’s three craters all filled with different coloured water. Many, including Marc, took the three and a half hour drive  plus three kilometre walk up the mountain and despite then enduring the three and half hours back, all counted it as worth every minute. As we had been up and seen this amazing natural feature in 2010 when we sailed this area on the Indonesian boat Ombak Putih we elected to have a relaxing day on the beach instead. We stayed a couple of days at Maumere and it was good to catch up with a lot of people who had skipped the Larantuka stop.
﻿
﻿
﻿ We headed to Riung next for more official receptions, tours and local sightseeing. On the way we  stopped for the night in a wide bay reputed to be a good anchorage. The bottom was uninspiring mud with no coral anywhere close so the snorkelling gear stayed stowed although we did enjoy an afternoon swim followed by a nice dinner of tuna and bottle of wine to celebrate Milan’s birthday. The bay proved not so good after all and we rolled all night with no one getting much sleep. At least it was easy to be up and away at first light because we all wanted to get the hell out of there. A pleasant surprise though was finding Ombak Putih anchored up in the shelter of the headland when we got up. We have extremely fond memories of our time and friends made on this lovely traditional Indonesian boat in December-January last year. It was great to see her again even if we weren’t able to say hi.
﻿ ﻿ 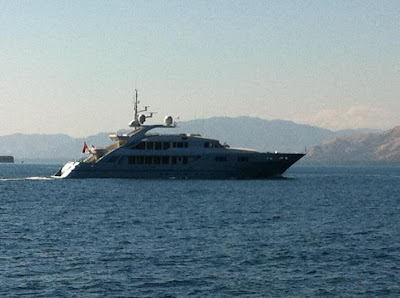