All on board Nae Hassle arose for an early departure not all that long after the competing  Mullahs surrounding the anchorage called their faithful to morning prayers. There’s hardly any need for an alarm clock when the wailing starts at 4.00am. 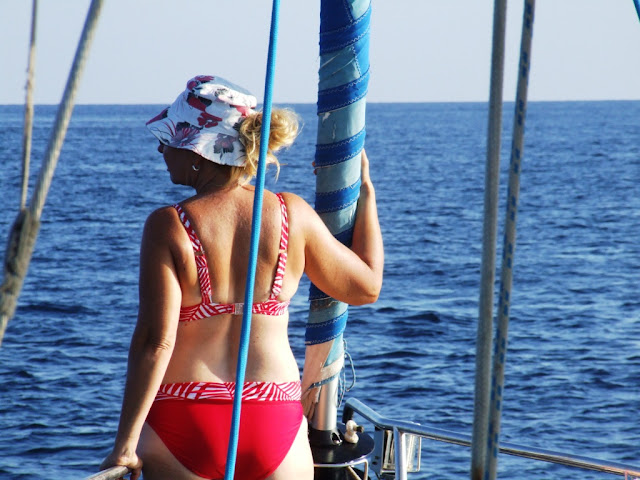 Boat secured, coffee swallowed, 20 metres of scope, 65 metres of chain and the anchor were hoisted aboard and we were underway by 6.00am for the run back out the harbour, north through the channel and then west towards Lembatti. We headed a group of five or six other boats who had also decided to leave early to try to best the strong currents between the islands. Nae Hassle motors along at a very respectable 6.5 knots through the water but the GPS shows our true Speed Over Ground. Heading out of the harbour we had the tide with us but when we turned north in the channel our SOG dropped from 8 knots to 5.5 but fortunately the current only slowed us by 2 knots a worst on our way to the clear water north of Pantah Island. Showing how quickly things change the boats that were half an hour behind us ran in to 4+knots and with virtually no wind they endured a very slow trip up the channel. 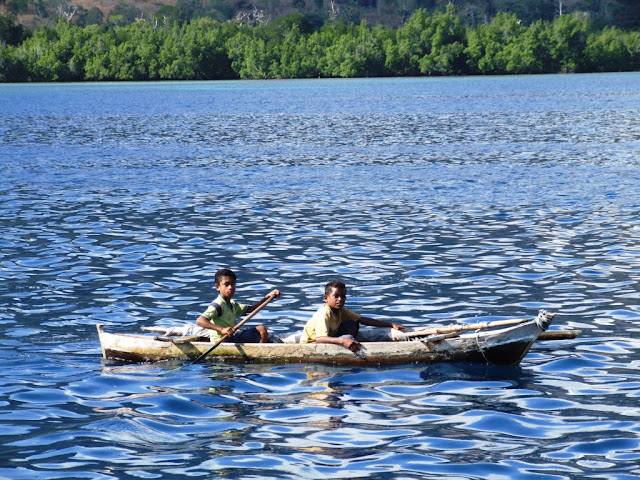 Although the wind picked up a little, it was almost dead astern and not strong enough to push us far so we motor-sailed through the day to our planned anchorage in Telek Balurin Bay on Lomblen. The waters here are incredibly deep and clear taking on an amazing cobalt blue colour which despite our best efforts couldn’t capture properly on camera. We dropped anchor just offshore mid afternoon in crystal clear water between two coral reefs and quickly broke out the snorkelling gear to check out the reef. Indonesia is so heavily populated that there are very few uninhabited places as bays like this everywhere support small fishing communities. As eight yachts and catamarans progressively arrived to fill the small anchorage the local kids soon arrived in dugout canoes with welcoming “Halo Meesters” all round. We left Darwin with a small supply of note pads, pens and pencils to give away to children which we have all but exhausted already. Forget chocolates or lollies, something as basic as a pencil is a much higher prized gift to these kids and makes us realise how much we take for granted at home. 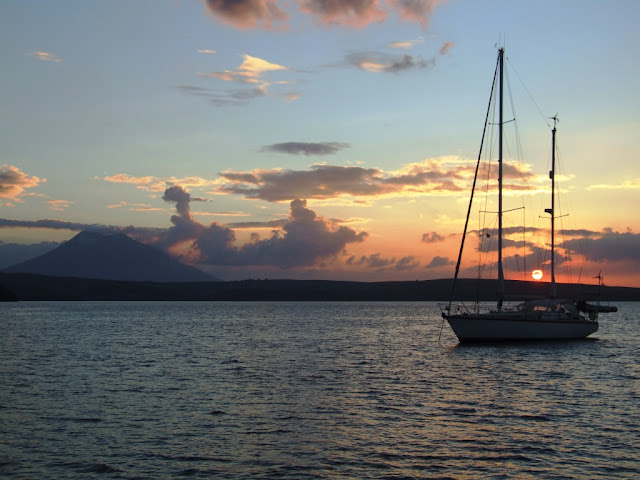 To the west of the anchorage the skyline is dominated by the classic cone shaped Lli Wariran volcano with a constant stream of steam and smoke issuing from the crater and sulphur gasses venting from fissures on its slopes. By the time we settled into Nae Hassle’s cockpit for a few wines with Kevin, Katie and Andrew of “Landin” from Gosford and Brits, Wil and Margaret from Atlantia, we were treated to a very cool sunset over the volcano.

Next morning we enjoyed what is becoming a tradition of a bacon and egg fry up Sunday breakfast rather than our usual cereal and fruit before upping anchor to meander further along the coast. We had info of another anchorage in the next large bay directly under the volcano but after spending a couple of hours exploring the area we found the sea shelved incredibly quickly. The depth sounder read 150 plus metres one second and 4 the next as we approached the shore. With the boat drawing 2.6 metres and plenty of coral bommies visible and after nudging one with the keel we quickly backed out of there. With no safe spot found  in that bay we headed back out and set sail in a nice moderate breeze further west to an anchorage on Ne Adunara Island on the western side of the Channel to Lembata, the next port of call for Sail Indonesia Rally. 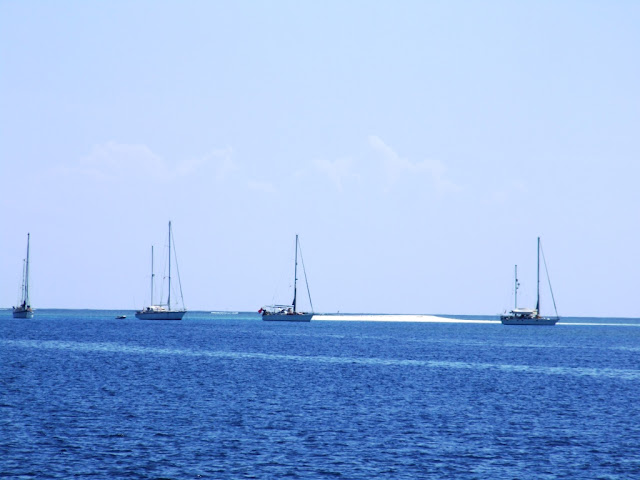 It proved to be a great decision as the second choice anchorage was a truly magnificent spot, off a small, golden white sand quay behind three small, offshore islands. This corner of Adanura Island is dominated by the Boling volcano which provided another spectacular backdrop to the turquoise blue water and palm lined shore. There’s excellent snorkelling over the reef to the west and a sweet left hand surf break off the other side had us wishing we had boogie boards with us.

﻿﻿
Eight of the rally boats were already swinging at anchor when we arrived with Rick on “Endangered Species”  telling us he’d been there for a number of days enjoying perfect conditions. The  Canadian catamaran “Cop Out” followed us in to the anchorage and after dropping their pick hailed all boats present on the radio. They had caught a big Maihi Maihi on the way and then followed it up with a huge 35 pound Wahoo so with their deep freezer already almost full they invited the fleet on board to help them eat their catch. It’s a good thing catamarans have such big cockpits and rear decks because we and the rest of the hungry hordes flocked aboard and devoured the beautifully barbecued fresh as you can get delicacies. A huge thank you to Ken and Wendy for their hospitality and artful valet parking of so many dingys off their stern. Both the fish had been caught using a hand made lure they had obtained in Mexico so we are still left wondering whether we’ve been unlucky since leaving Australia or if Indonesian fish  simply don’t like our chrome spoon lures the way their Aussie counterparts do.

After another incredible sunrise over the volcano next morning, we headed for the sand quay in the dingy for a great swim and an hour or so of just soaking in our incredible surroundings. As crew mate Marc pointed out, we were having a much nicer Monday morning than most people in the world. Definitely no Mondayitis here. When we returned to the boat Rob donned the snorkelling gear to check for any damage to the keel from our little nudge on the coral the day before. Apart from a small scrape on the antifouling paint all was fine. An indication of how clear the water is in this little piece of paradise, the anchor chain was visible laying on the sand bottom 25 metres below the boat.

By 9.30am we were on our way through the narrow Boling Straight for the short hop to Lembata. The currents were again very strong but fortunately flowing with us producing up to 10.8 knots over the ground. We lined the rails on lookout steering around the worst of the whirlpools through the straight then had a relaxing run into the bay to be anchored up by lunch time. 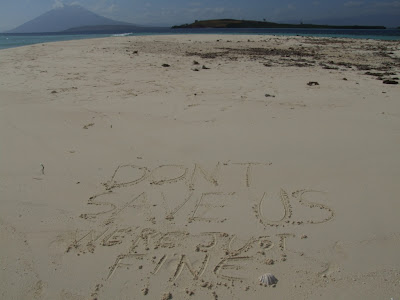