﻿﻿﻿
﻿
Waking up early and sitting on the stern of the boat looking across the harbour at the 40 or so yachts sitting serenely on the glassy water provides instant reinforcement of why we’re doing what we’re doing. The absolute sense of peace is overwhelming. Since boarding the boat in Cairns we’ve sailed over Fifteen Hundred nautical miles to reach this spot but Kalabahi, Alore Island, Indonesia certainly feels more like Fifteen Million miles away from life in Ipswich, Queensland, Australia.

We crew trio, Rob, Karen and Mark headed ashore after breakfast to explore a bit of this town of 60,000 people. While predominantly Protestant, 20 percent of the population here is Muslim and this is the season of Ramadan when all members of the Islamic faith observe a period of fasting between sun up and sunset. As a result the vast majority of local restaurants were closed during the day however all other commerce seems to continue as normal. At least the mosques’ pa systems are much quieter here and don’t tend to blast us awake with the call to prayers at 4.00am. 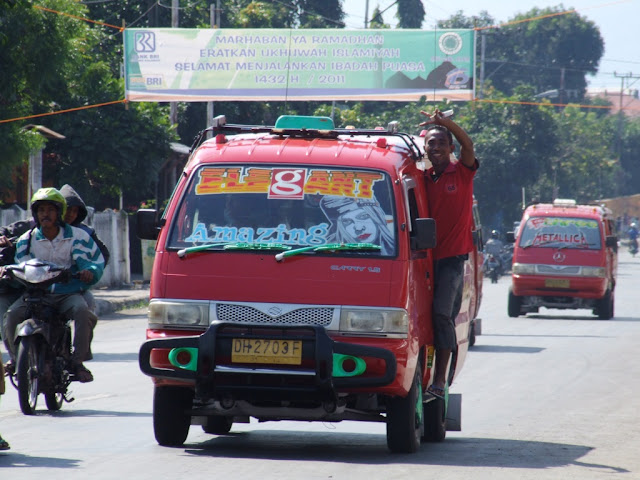 Once again the array of decoration on the ever passing parade of Bemos kept us highly entertained. The local markets offered a huge range of produce including fresh vegies, fruit, live chickens and eggs as well as fish displayed on open trays in the 28 degree heat. Funnily enough we weren’t tempted by the fish, coral trout or not. Good thing we still have a supply of fillets and tuna steaks in the freezer from our earlier fishing successes. There’s very little English spoken here so Rob’s translation app on his i-phone has been getting a work much to the bemusement of the locals. As he types a question in English into his phone they looked confused until he hits play and the phone repeats the question in a slightly metallic Indonesian voice. Sometimes they still look confused so we’re a little unsure of the accuracy of the translation sometimes but it has helped so far. 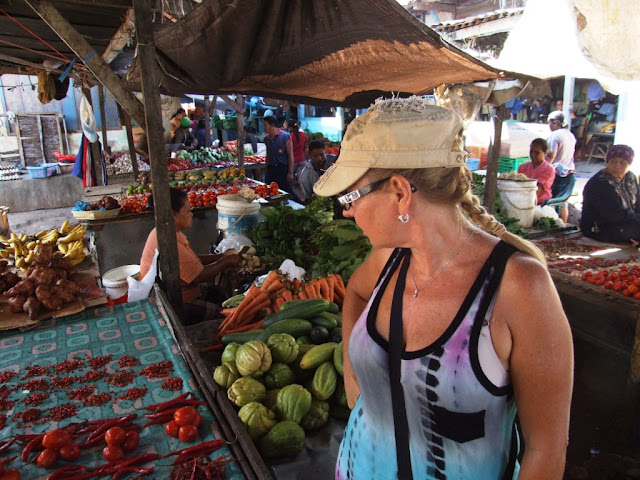 The water front here is a small but busy commercial port with the main shopping and commercial areas a block or two back from the sea. A welcome and information marquee has been set up at the temporarily installed dingy pontoon but the lack of a beach front bar/restaurant like the one in Kupang has meant there is no central hub for the visiting yachties to congregate. While we are already missing the camaraderie over Bintangs, it may encourage us to spend a bit more time exploring what the island has to offer.
﻿
﻿

The second day in port we were treated to a surprise while kicking on back Nae Hassle enjoying a couple of cold Bintangs with Allan and Noi off “Rogue”. Two humpback whales surfaced in the harbour just 40 metres off the boat’s bow. The anchorage is at the extreme end of a very narrow but deep 12 kilometre long inlet so we certainly didn’t expect these visitors. We were even more surprised to see a pod of five or six more in the distance heading down the other side of the inlet. A great way to end a day.

The following night we enjoyed the hospitality of the Alore Regent who is head of government on the island and put on a great event for the 35 crews who attended a slap up dinner and entertainment at the “White House”, his official residence. We did keep a look out for Obama but he wasn’t to be seen anywhere. The quality of both the food and traditional entertainment provided was fantastic however as was the genuineness of the personal welcome extended by the Regent. A real contrast to the two welcome dinners in Kupang where the hosts absent. The only slight downside was no Bintangs in deference to the Islamic faith but they came later back on board.
﻿
﻿

Alore reputedly has some of the very best diving and snorkelling sites in all of Indonesia so we were keen to get in the water and see for ourselves. Some of the other crews booked trips on to a local dive boat and reported enjoying their day but no one was quite as enthusiastic in their words as the guide books.  Nae Hassle’s owner Colin and his partner Milin are not the swimming and snorkelling type so we booked on to a bus tour that was going to visit a traditional village and then go to what was described as “white sand paradise beach with number one snorkelling”. We were told the buses were leaving the dock at 9.00am but typical of Indonesian organisation, Keith and Claire on “Panuliris” were told 8.00am, Colin and Milin were told 9.30am and everyone we spoke to seemed to have been told something different. So away we went just past 10.00am but after all and sundry had been standing around waiting for various lengths of time depending on the departure  information they were given, our convoy of three oversized bemos drove all of three blocks and pulled into the regional museum for a previously unannounced stop. Ahmed, the local Rally representative, read profiteer, took great delight in personally narrating details of each exhibit in the two room museum which was even more underwhelming than the one in Kupang.
﻿
﻿

By noon we actually reached the village of Takpola and were treated to the genuinely friendly welcome we’ve received everywhere so far and a demonstration of traditional dancing and mock sword play by the warriors. In times past these people were genuine headhunters but these days they get by through subsistence farming and entertaining the odd tourist group like ours.The village is perched under a grove of giant tamarind trees, high on a hillside with magnificent views over the ocean to the north. Talk about location, location, location. The traditional houses on stilts feature steep raked, thatched roofs with wide eaves extending well out from the edge of the lower or meeting level, The next level is for cooking with a small third, attic sized level used for storage. The visit was really interesting and well worthwhile.

Like Timor, the island of Alore is fairly dry at this time of year but it keeps the humidity from becoming oppressive and with temperatures in the high 20’s it has been quite pleasant. We reached “white sand paradise beach with number one snorkelling” on the eastern end of the island to find a crushed coral beach with a patch of sand. A shelf extended about 60 metres out from the beach to a sharp drop off to the depths of the channel between Alore and Pantah Islands. A local advised us to enter the water at the southern end of the beach and drift north with the current which worked perfectly for half the way and then the tide turned and we got an instant encore of the all the soft corals and small fish we’d just seen. A long walk north up the beach was then followed by a rapid drift south along the drop off as the current started to hit its 5 to 6 knot peak. All very enjoyable but not quite the Great Barrier Reef or Komodo National Park despite Ahmed’s insistence that it was the second best dive in the world. We really did enjoy getting in the water though and can’t wait to repeat the process as soon as possible.
To stay right up to date with what we’re up to these days and see lots more photos check out and 'like' our Dreamtime Sail Facebook page at Dreamtime Sail on Facebook